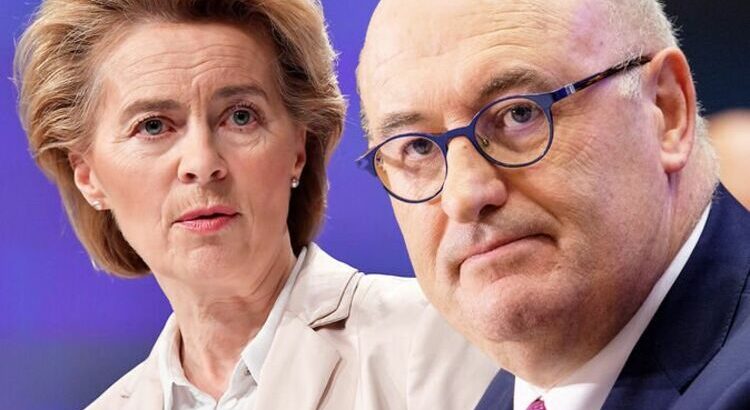 Ireland’s former Commissioner Phil Hogan has hinted he will challenge for recompense following his resignation in 2020. He stepped down in August that year over what has been dubbed ‘Golfgate’.

French journalist Jean Quatremer, quoted in RTÉ, said upon interviewing Mr Hogan he “did not rule out the idea of demanding compensation for the damage suffered”.

Mr Hogan was among the 81 guests who attended a gathering of the Oireachtas Golf Society in County Galway in August 2020.

Organisers argued they did not breach the rules because a partition divided the attendants into two groups of 45 and 36.

In one meeting, the former Commissioner said he felt the body’s President “wants to end this affair as quickly as possible and that she wants me to leave”.

He added: “She immediately believed in the interpretation given by the Irish Government, which claimed that I had undermined its pandemic strategy by my actions.”

The next day, she “demanded” Mr Hogan gave an interview to RTÉ “to explain himself”, Mr Quatremer says.

Mr Quatremer, quoted in the paper, notes in commentary: “A Commission president who manages the media agenda of a commissioner is undoubtedly a first.”

In further meetings, Mr Hogan was reportedly told social media in Ireland was calling for his resignation and, by Mrs von der Leyen, that having obeyed the law “does not resolve the way his behaviour was perceived”.

She is later reported to have urged the Commissioner to resign.

He did so, but now appears to be on the edge of seeking revenge.

DON’T MISS:
Boris urged to cut the ‘soundbites’ and focus on action [OPINION]
Tory civil war erupts as Scottish Conservatives REFUSE to back Boris [REPORT]
Prince Andrew legal settlement with Giuffre ‘will have been millions’ [REVEAL]

Four organisers of the event – Noel Grealish, Donie Cassidy and John and James Sweeney – were cleared of any wrongdoing by Galway District Court earlier this month.

This could build Mr Hogan’s case, if he were to seek compensation.

But an Ireland Thinks poll for the Sunday Independent, published earlier this month, suggests Mr Hogan has not been cleared in the ‘court of public opinion’.

Fifty-nine percent of its respondents said they did not agree with the decisions to acquit the event’s organisers, indicating a continued frustration with the event and, more importantly, those who attended it.

Less than one-third said they agreed with the decision while 10 percent answered “don’t know”.

If Mr Hogan does seek compensation, the ‘Golfgate’ controversy will be far from over and further, more bitter division could be sparked within European Union ranks.

Asked about the claims made in the Libération report, Mrs von der Leyen’s spokesperson Eric Mamer said: “Commissioner Hogan presented his resignation after discussions with the President after a period of days, and after that, declarations were published, and as we said last week, we don’t have anything to add to what was said at that time…

“We are not in the habit of commenting on what was said or not said in internal meetings.”