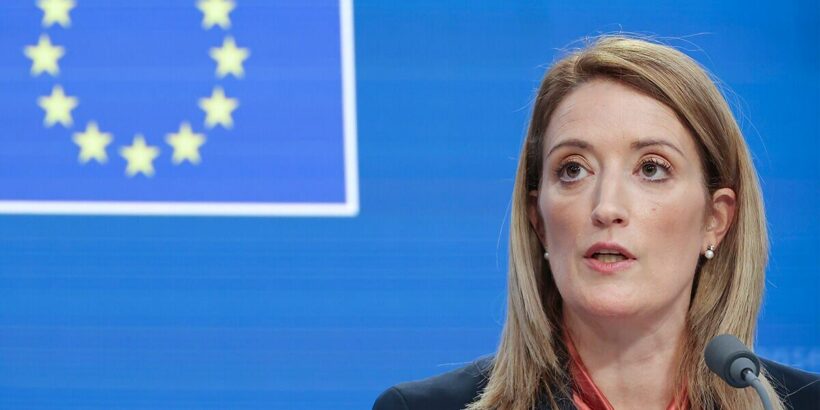 The President of the European Parliament, Roberta Metsola, failed to declare 142 gifts before a deadline as the EU continues to face scrutiny over an alleged Qatar bribery scandal. A number of arrests have been made after police seized €1.5million (£1.31million) in Qatari cash.

EU rules prevent MEPs from accepting gifts worth more than €150 (£131) and any gifts received must be declared.

Ms Metsola, a Maltese politician who has been President of the European Parliament for a year, received 142 gifts under the €150 threshold.

However, despite previously saying she refused gifts, records show she was given presents such as a gold model tower from a Moroccan politician, a white dress from the speaker of Bahrain’s parliament and a plate from an Uzbek ambassador.

Other gifts she received include champagne, chocolates and delicacies “served in the course of the parliament’s functions”.

These items have now been declared, but Ms Metsola failed to abide by the rules which say all gifts must be placed on the register of interest before the end of the following month.

Ms Metsola is one of a number EU figures to be investigated. The scandal concerns payments allegedly made by the Qatari state to politicians in Brussels to help garner support for the Middle Eastern countries’ World Cup last year and to influence a vote on visa liberalisation.

Qatar has strongly denied the allegations.

Mr Panzeri, a former Italian Socialist deputy, has been accused of being the ringleader of a bribery network “intervening politically with members working at the European Parliament for the benefit of Qatar and Morocco.”

The Italian politician has promised “substantial, revealing, truthful and complete statements regarding criminal offences within the covered case” which means he could shed new light on those involved in the corruption.

The Greek MEP has denied the allegations but her husband admitted that he “did it all for money I didn’t need”.

Ms Metsola has pleaded a technicality and custom, arguing that previous presidents did not declare such gifts.

In an interview with Politico, she said: “When a president receives a gift, it is not in my capacity as a member, but as the parliament.

“I’m going to list everything which would anyway have been declared internally.”

Michael van Hulten, the director of Transparency International EU, told The Times that the scandal has exposed flaws in the EU’s measures to prevent corruption.

He said: “This shows the system is broken. The parliament continues to rely entirely on self-enforcement of the rules. We know that doesn’t work. We need independent, outside oversight.”

The scandal has had huge ramifications on relations between Europe and Qatar.

In December, a Qatari diplomat suggested that the EU’s hopes of buying more gas from the Gulf state could be affected by investigations into corruption.

They said: “The decision to impose such a discriminatory restriction that limits dialogue and cooperation on Qatar before the legal process has ended, will negatively affect regional and global security cooperation, as well as ongoing discussions around global energy poverty and security.

“We firmly reject the allegations associating our government with misconduct. Qatar was not the only party named in the investigation, yet our country has been exclusively criticised and attacked.”