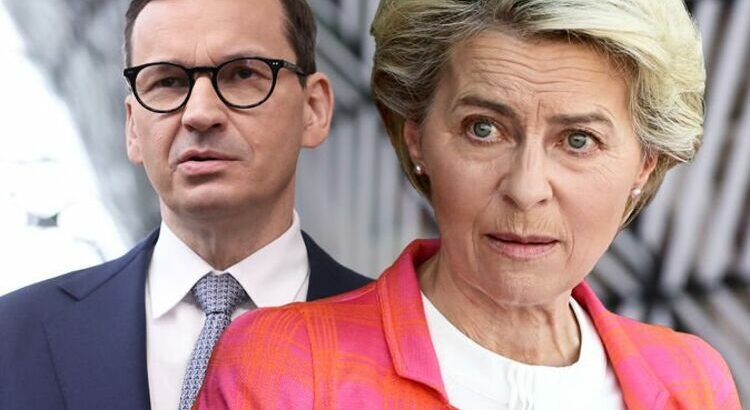 Marine Le Pen before a meeting with nationalist leaders in Warsaw, Poland

Polish state-controlled utilities have blamed Brussels for the high energy prices across Europe. Their lobby group, TGE, has plastered the country with billboards claiming the EU’s climate policy equates to “expensive energy” and “high prices”.

A statement from Poland after the meeting expressed “very large doubts over the continuation of the EU ETS in its current shape”.

Mr Sinkevičius added the emissions permits are not a “ransom” paid to Brussels but a source of revenues for Warsaw.

He said: “Complaints should be directed to the national government because that’s who decides about the use of funds from higher emission charges.

“There’s nothing stopping them from directing the money to decarbonization support programs.”

The EU Commission said the allegations in Poland’s campaign were wrong and pointed out much of the price on energy bills consists of transmission costs, domestic taxes and other fees.

Forum Energii, a Warsaw-based energy think tank, wrote: “[The campaign] does a great deal of harm — it distracts attention from the fundamental problems of the Polish energy sector.

“It distances us from solutions that can effectively stop price increases.”

Although Poland has blamed the EU for rising energy prices, the latest analysis by Instat found Polish power companies are not being hurt.

The market analysis company said: “Since the beginning of 2022 Polish government and state-owned energy companies are misinforming the public by blaming the EU for rising electricity prices.

“This happens in a moment when an average Polish coal power plant generates windfall income with margins up to 70 percent of generation costs.”

Last week, Polish Prime Minister Mateusz Morawiecki said “at least half of the price of electrical energy is due to the European Union’s climate policies”.

Back in December, Mr Morawiecki demanded a change in the way the ETS is run to end what he called “speculation”.

This comes amid increasing tensions between Poland and the bloc.

This week, the EU Commission has had the final sign-off required to slash funding for countries deemed to be flouting democratic standards – in a blow to Hungary and Poland.

Warsaw and Budapest appealed against the rule of law mechanism in December 2020.

It allows the EU to reduce funding to countries where breaches negatively impact European taxpayers’ money.

According to Brexiteer Robert Kimbell, this verdict means Poland and Hungary must leave the EU if they want to retain national sovereignty.

Poland and Hungary have been at odds with the EU Commission over issues ranging from LGBTQ+ rights to judicial independence.

Poland rejected the principle of the primacy of EU law over national legislation in certain judicial matters.

This marked the first time in the history of the 27-strong EU bloc that a leader of a member state had questioned wholesale EU treaties in a constitutional court, the BBC reported.

Mr Morawiecki wanted to prevent Polish judges from using EU law to question the legitimacy of judges following recent changes to the judiciary.