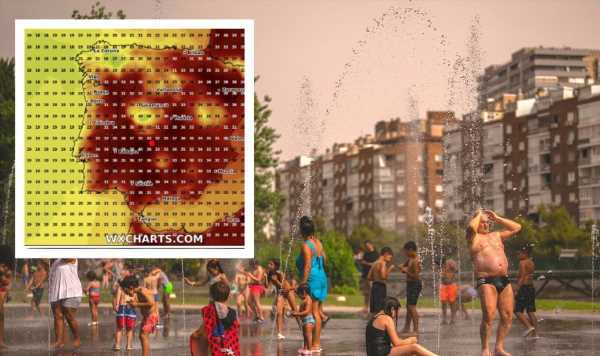 Places in mainland Spain such as Andalusia, Madrid, Catalonia, Aragon, Murcia and Castilla-La Mancha are set to bake from tomorrow (June 17) with the humidity lasting until at least Sunday. Temperatures are also set to be at least seven to 12 degrees above the norm for this time of the year in a large part of the peninsula and the Balearic Islands. The Canary Islands and the Principality of Asturias are the only regions that have not experienced such a surge in heat. It is also expected to be between five and 10 degrees above normal daytime temperatures in the northern part of the country.

While these sizzling conditions are somewhat unusual for this time of the year, AEMET spokesman, Rubén del Campo claimed it is unlikely to be a record-breaking weekend.

The last time Spain experienced such temperatures at this time of year was between June 26 and July 1, 2019.

He said it was “so intense” that records were broken not just for the month, but for the entire 12 months as a whole.

But, this heatwave will be one of the three hottest since records have been kept, he added.

He said he expects the mercury to reach or exceed 40C in Bilbao, Ciudad Real and may even reach 43ºC in Córdoba, Gerona, Granada, Huesca, Jaén, Lérida, Madrid, Murcia, Pamplona, Toledo and Zaragoza.

The evenings will also have a tropical feel to them especially in the southern parts of the country, with temperatures barely slipping.

NetWeather predicts the nights will still be recording highs of 27C to 32C, making for extremely uncomfortable sleeping.

Mr Del Campo said: “More than a quarter of the Spanish provincial capitals could exceed 40C on Friday, which gives a good idea of the large territorial extent that the heat wave will reach this day.”

On Saturday (June 18), there will be a temperature drop coming from the Atlantic which will “inject” warm air coming from North Africa.

But it is thought at this stage that it will not be strong enough to bring Spain’s heatwave to an end.

If the heatwave is brought to an end on Sunday it will have lasted seven to eight days – potentially dubbing it the earliest heatwave in Spain for the month of June.

There have only ever been two heatwaves in June between the 10 and 20 of the month, Mr Del Campo recalls.

Meanwhile in the UK, much of the south and the Midlands will be experiencing some of the intense heat tomorrow (June 17).

Temperatures are expected to reach 34C in central London, before thunderstorms come crashing down on Sunday, bringing cooler spells in its wake.

A Level 3 health alert has been implemented by the central Government and the Met Office for a two-day period warning vulnerable people to take extra care.