Framing the May 23-26 vote as “absolutely crucial,” Mr Macron said that European citizens faced a stark choice during a meeting of EU leaders in the Romanian town of Sibiu. He said: “Do we still want to build Europe together, even if we do things differently and make improvements; or do we want to deconstruct or destroy Europe and return to nationalism?” “I will put all of my energy into the EU campaign to prevent the RN from winning the French vote.

I am a French patriot and a European. RN party members are nationalists who want the deconstruction of Europe

“I am a French patriot and a European. RN party members are nationalists who want the deconstruction of Europe.”

The French leader has repeatedly framed the May vote as a bitter battle between those who want ‘more’ Europe and far-right populists determined to upend the political status quo.

Other polls show the two rival parties neck-and-neck at around 20 percent.

An OpinionWay/Tilder voter intentions poll conducted on April 15-24 and published on Thursday revealed a deep split among young voters in France.

The poll of 1,498 French people aged between 18-25 showed the two leading parties receiving the same number of youth votes, 19 percent. 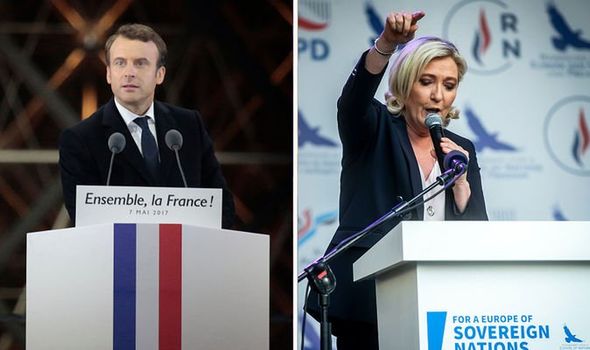 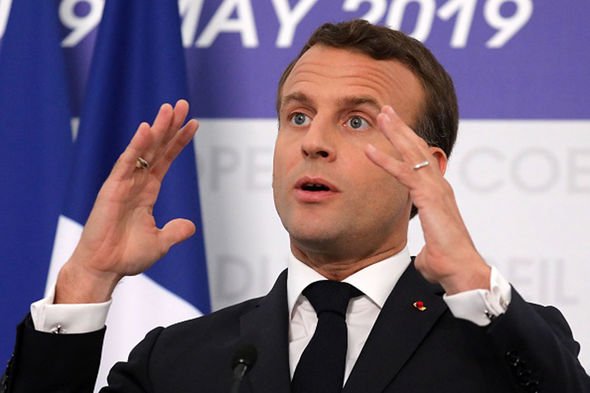 The veteran nationalist, who changed her party’s name from Front National to Rassemblement national to shed a brand associated by many with racism and anti-Semitism, is currently basking in high poll numbers and bursting in confidence.

Asked to comment on Mr Macron’s pledge to crush her party later on Thursday, the far-right populist said the President would have to quit power if his REM movement loses the EU election.

“The EU vote has become a referendum for or against Emmanuel Macron’s government. I accept that, but under these conditions: if he loses this election, then he must leave,” Mrs Le Pen told LCI television.

RN spokesman Sébastien Chenu echoed her words on Friday, telling France 2 television that the president would not be able to remain in office if he lost the EU election.

Mr Chenu said: “What Emmanuel Macron is saying is this: it’s me or chaos. He has therefore turned the vote into a referendum on the Macron presidency.

“If the RN comes out on top, the president will have to accept the consequences. He will have lost.

“He will either have to relinquish power or organise snap parliamentary elections.”

In France, the number of seats a party wins in the EU parliament is determined by proportional representation across a single, national constituency.