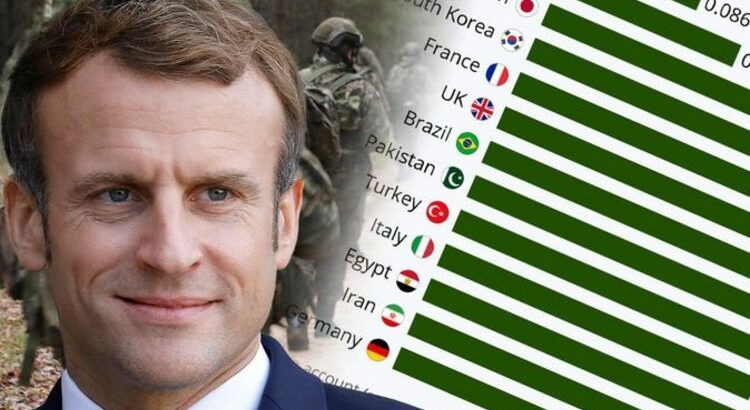 Tom Tugendhat on military action on the Poland-Belarus border

Tensions are rising on Europe’s eastern front as a Russian military build-up near the Ukraine border raises alarm amid concerns over the escalating migrant crisis at the Poland-Belarus border. The USA and EU are discussing potential responses if the Russian President Vladimir Putin were to take military action. But the EU has been criticised for its lack of military powers. Express.co.uk has ranked Europe’s biggest military powers from strongest to weakest.

When it comes to military power, no nation comes close to the military size of China – which has 2.19 million active military personnel.

The USA is considerably less at 1.4 million people.

But which European nations are leading the way?

The Global Firepower PowerIndex ranks military powers depending on each country’s strength.

Each of the countries is given a PwrIndex score which is an assessment on individual and collective values as processed through Global Firepower’s in-house formula.

The index uses more than 50 individual factors to determine the PowerIndex score including military might, financials, logistical capability and geography.

The strongest country by military power in Europe is Russia with a score of 0.080.

France ranks as the second most powerful with a PwrIndex score of 0.1681.

The UK ranks as the third most powerful European country – with a score of 0.1997.

The remaining countries in Europe are ranked in the following order:

Nations around the world including the USA, Russia and China are leading the way when it comes to their military outfits.

A top European Union diplomat warned the bloc on Wednesday must agree on an ambitious doctrine as the basis for joint military action abroad, including with a deployable crisis force.

The EU’s foreign policy chief Josep Borrell told his fellow European Commissioners, the closest thing the EU could have to a military doctrine and akin to NATO‘s “Strategic Concept” that sets out alliance goals.

He warned “Europe is in danger” and stressed the importance of the US-led NATO alliance for Europe’s collective defence.

Since Brexit and Britain’s departure from the bloc, Paris has been given the opportunity to push ambitions for a bigger EU role in defence.

French President Emmanuel Macron last month said the EU could be a more useful ally to the USA if it develops standalone military capabilities.

The European Union is considering a joint military force of up to 5,000 troops by 2025 to intervene in a range of crises and without relying on the United States, according to a draft plan.

The draft plan, called the EU Rapid Deployment Capacity, is being discussed by EU Foreign and Defence Ministers having started on Monday evening and continuing on Tuesday.

The Ministers are aiming to settle on a final document by March next year.

The EU has maintained battlegroups of 1,500 troops since 2007 but they have never been used, despite efforts to deploy them in Chad and Libya.