Even prehistoric Skinner has had enough of Mr Squeaker: QUENTIN LETTS on yesterday in Parliament

Even old Dennis Skinner is now making public that he has had enough of John Bercow.

The prehistoric Labour MP for Bolsover lost patience with the Squeaker yesterday when Bercow failed to notice that he was trying to intervene on Trade Questions.

Mr Skinner does not, understandably, find it so easy as some MPs to spring to his feet to indicate his desire to contribute to debates. And so he missed the narrow moment when he was meant to be standing, proud and tingling, to catch the Speaker’s eye.

Mr Skinner crossed his arms, looked immensely cheesed-off and said, loud enough for those of us in the gallery to hear: ‘We all know you look for your favourites!’ 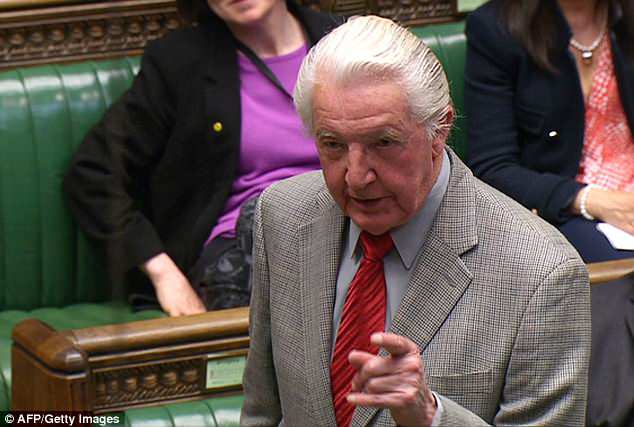 Bercow opened his mouth almost as wide as the Mersey Tunnel. ‘Eye Meaust Certaynly Deaun’t Look For Favourites,’ he said, guppy-fishing in disbelief that anyone could speak so bluntly to the Occupent of the Mighty Chair.

Mr Skinner continued to yack at Bercow, even when offered the chance of putting the point he had wished to make. He complained the moment had passed – he had been interested in contributing to the previous exchanges.

It was all down to the fact that he was not one of the Speaker’s little gang of pretty ones.

Any Conservative displaying such open dissent to the Speaker would be given the most almighty carpeting by Bercow.

We would have had purple-gilled apoplexy. We would have had ‘I can deal with this, thangyew’ and ‘I do not need to be told how to conduct myself, let him be in no doubt about that’ and ‘if the Hon Gentleman is somehow under the apprehension that he can cheek the Chair, I must tell him that he is sorely ill-advised’ and so forth.

He would have made a tremendous to-do about it.

But Mr Skinner is not treated that way. Why? Because Bercow is scared of him. It is partly a class/regional thing – middle-class Southerner Bercow is timid in the face of Mr Skinner’s more Northern and working-class ways – but it is also because Bercow, like any bully, is a coward who shies away from people who fight back. 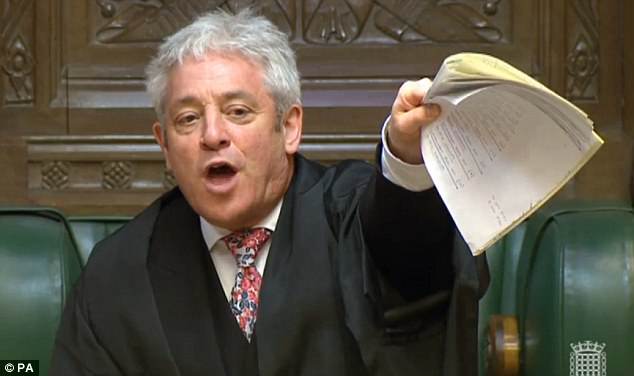 John Bercow ‘like any bully, is a coward who shies away from people who fight back’

And so he settled for dealing with Mr Skinner’s testiness by saying, ‘I hope his mood improves’ – and, a short while later, letting him put an indignant but rambling question to new trade minister George Hollingbery.

Mr Hollingbery announced that he hadn’t got a clue what Mr Skinner’s question was about. End of scene.

Mr Skinner may never have much liked Bercow. Stalwart socialists such as he find Bercow’s drift to the Centre-Left unpersuasive and opportunistic. But he has a point, hasn’t he? This Speaker does have very obvious favourites.

A short while later, for instance, he called Dame Barry Sheerman (Lab, Huddersfield), an interminable figure who is as wet as a labrador’s nose but is forever being invited to give Parliament the benefit of his opinions. The moment ‘Sheerman’ was uttered by Bercow, Mr Skinner turned and said to an Ulsterman sitting behind him: ‘That’s one of his favourites!’

Who else is in the Bercow club? Let us see. ‘Mister Kenneth Claaaaaaarke,’ as Bercow pronounces it, is a prominent member. Others: Labour’s Chris Bryant (Rhondda), though he has started to take the mickey; a sycophantic Cardiff man called Doughty; Carshalton’s Tom Brake, one of the few Lib Dems to receive his encouragement; unscintillating Scots Nats Joanna Cherry (Edinburgh SW) and Peter Grant (Glenrothes); Tory harrumpher Sir Edward Leigh (Gainsborough); and Julian Lewis (Con, New Forest E), who was Bercow’s best man and whom he invariably hails as ‘the good doctor’ (he has a PhD).

A proper Speaker would not indulge favourites.