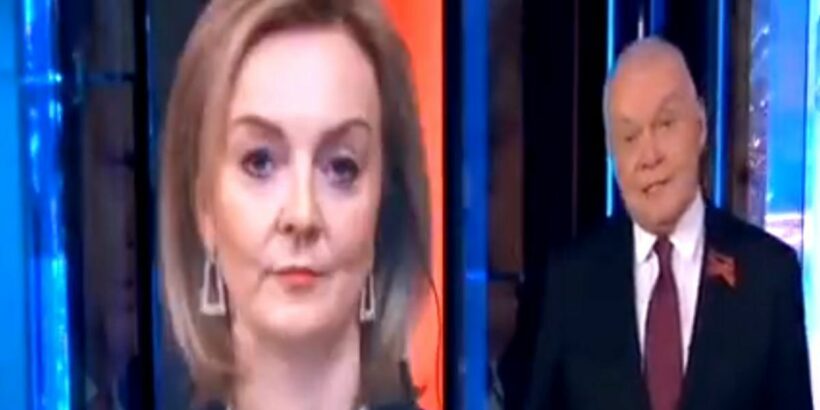 Russian state-controlled television announced Putin’s military forces were prepared to launch a nuclear attack on the UK in response to comments made by British politicians. The pundit, identified as Dmitry Kiselyov, claimed the Russian military was armed to attack the UK with nuclear weapons after comments made by Liz Truss. The host alleged the UK Foreign Secretary threatened conflict between NATO and Russia as she warned the conflict in Ukraine could protract for years in a speech last week.

The Russian presenter also condemned comments made by the Prime Minister which encouraged Putin to attack the UK.

The Russia 1 host said: “It was after the inappropriate words from UK foreign secretary Liz Truss about how ‘it could all turn into a conflict  between Russian and NATO’ that President Puti put our nuclear deterrence forces on high combat alert.”

He did not make clear exactly which statement made by the Foreign Secretary had prompted the response from the Russian military.

Kiselyov claimed Russian powers were ready to strike the UK as reprisal for the statements made by British politicians.

He continued: “Put simply, we’ll get them ready now.

“But what will happen after Boris Johnson’s words about a ‘retaliatory’ strike on Russia?”

Again, the Russian television host failed to clearly identify the inflammatory statements made by the Prime Minister.

He continued: “It actually seems like they’re raving on the British Isles.

“Why threaten never-ending Russia with nuclear weapons when you’re on an island which, you know, is so small?”

The host boasted of the power of Russian nuclear weaponry.

“The island is so small that just one Sarmat missile is sufficient to sink it once and for all,” he claimed.

Russian state television has continually condemned the involvement of international forces in Ukraine, particularly the influence of NATO.

While the exact comments that have infuriated Russian authorities remain unclear, the foreign secretary has made damning statements regarding the actions of Putin’s military.

Regarding the actions of invading Russian forces, Liz Truss stated: “Their indiscriminate attacks against innocent civilians during Russia’s illegal and unjustified invasion of Ukraine must be investigated as war crimes.”

The Foreign Secretary announced: “The UK will fully support any investigations by the International Criminal Court, in its role as the primary institution with the mandate to investigate and prosecute war crimes.

“We will not rest until those responsible for atrocities, including military commanders and individuals in the Putin regime, have faced justice.”