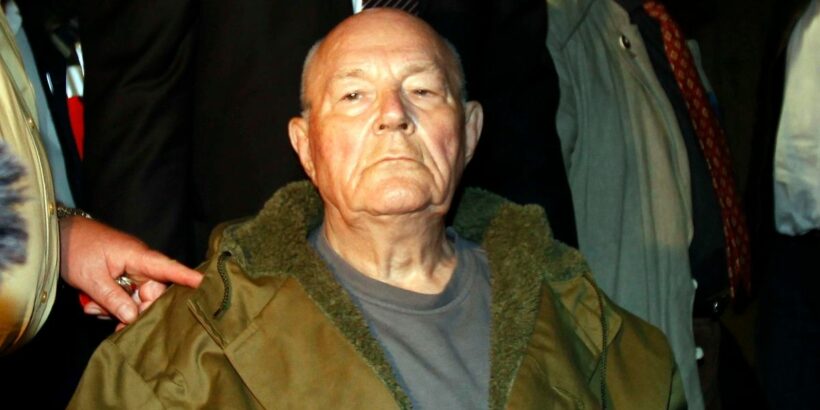 “Secretary of Evil” Irmgard Furchner went on the run after failing to turn up to her trial for Nazi war crimes, as we reported.

Accused of helping in the slaughter of 11,000 prisoners at Stutthof concentration camp in Poland during World War Two, the 96-year-old fled her German care home and boarded a train.

An ex-SS commander’s assistant, she was picked up hours later and will now face justice – but some of those who helped carry out the Third Reich’s worst atrocities evaded capture for decades.

New film, Getting Away With Murder(s) reveals many culprits went unpunished. Now James Moore looks at the fate of five notorious Nazis who escaped…

Responsible for conducting horrific experiments on prisoners, including pregnant women and children at the Auschwitz death camp, the SS medic later fled to Argentina, Paraguay and finally Brazil, managing to evade capture or extradition.

He died in 1979, aged 67, after suffering a stroke while swimming off the coast of Brazil, and was buried under the name Wolfgang Gerhard, before he could be brought to justice.

The “Technician Of Death”
masterminded the logistics behind Adolf Hitler’s “Final Solution” – the extermination of six million Jews in concentration camps.

After the war the SS officer ­escaped to Argentina, settling there as Ricardo Klement with his family and working in a car factory.

Eventually captured by Mossad agents and put on trial in Israel, he was convicted and hanged, aged 56, in 1962.

A brutal Gestapo chief in Lyon, France, he personally tortured Jews and Resistance fighters and was responsible for 14,000 deaths.

After the conflict he was smuggled to Bolivia where, as Klaus Altmann, he advised the nation’s regime on interrogation techniques and even cosied up with drug lord Pablo Escobar.

Extradited to France in 1983, when the country’s military dictatorship collapsed, he was convicted of crimes against humanity and died behind bars, aged 77, from cancer in 1991.

A Ukrainian-born Nazi concentration camp guard, he emigrated to the US, post war, to live a suburban life as a family man.

In the 1970s Israeli authorities tracked him down and he was initially convicted as “Ivan the Terrible” – a cruel guard at the Treblinka death camp.

He was later released, apparently misidentified. But in 2011 he faced trial again, in Germany, and was convicted as an accessory to the murder of 30,000 prisoners at Sobibor death camp.

He died, aged 91, while appealing and is the subject of film The Devil Next Door.

Oversaw the murder of Jews and thousands of disabled people in a white uniform.

Aided by a Nazi-sympathizing bishop, he fled via Syria to Brazil after the war and worked for Volkswagen before legendary Nazi hunter Simon Wiesenthal helped to get him arrested in 1967.