Former SAS Afghan interpreter reveals he was hunted and shot at by Taliban but government is still refusing him sanctuary in the UK, forcing him to ‘hide in the shadows’

A former Afghan interpreter for the SAS last night revealed how he had been hunted relentlessly by the Taliban – but the British Government still refuses him sanctuary in the UK.

Abdul, who worked with British forces on the frontline for nearly five years, said he had been shot at and had his home attacked as part of a terrifying campaign of intimidation by insurgents.

He said he had been forced to flee from the Taliban four times and was now ‘hiding in the shadows’ because he feared for his life. Abdu (right), 35, worked with British forces on the frontline for nearly five years but claims he’s being refused refuge in the UK – despite being targeted by the Taliban

The 35-year-old said he had handed over three death-threat letters to the British authorities, together with details of menacing telephone calls, but they had merely told him to move home.

In the calls, he has been told he was convicted by a Taliban court under Islamic law and sentenced to death because of his work with ‘infidel forces’.

Details of his ordeal come after a defence select committee inquiry found that officials had refused to allow a single interpreter to the UK under its intimidation scheme.

Speaking from the Afghan capital Kabul, Abdul said: ‘The British told me only to change my telephone number, to change where I live, and I have done everything possible to protect my family, but each time I am found.’

He added: ‘I am forced to live like a nomad, I am running all the time and living in the shadows but the places to hide even in Kabul are becoming fewer and I ask the British authorities to show us compassion and moral decency so my family can live without fear and wondering when a bullet will find me.

‘The only reason I am a target is that I worked side by side with British soldiers… the British know that and have the evidence the Taliban is after me.’ 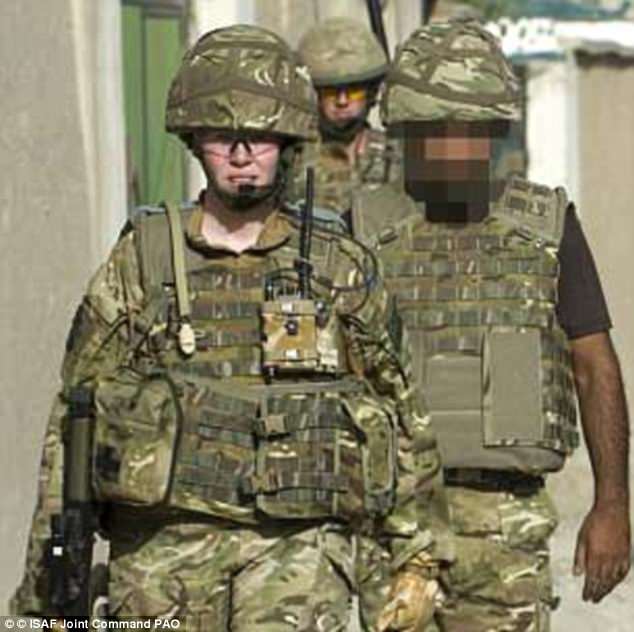 Translator Fardin, whose face has been obscured, has also been hunted by Taliban fighters and refused sanctuary in the UK

Abdul began working for UK forces as a frontline patrol interpreter in 2007, having worked previously with US troops.

He said he stopped working with the British in 2012 when his contract ended and he did not try to renew it because of the death threats.

Because he stopped working before December 2012, he was not entitled to come to Britain under a ‘relocation scheme’. 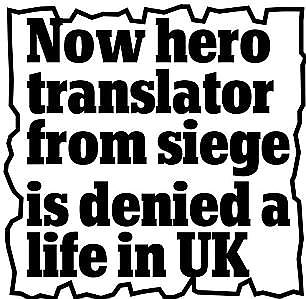 Headline in Daily Mail on January 27 this year

Abdul said because he was not eligible for the scheme he tried to do what the British and Afghan governments wanted and merged back into the community and work. He bought a taxi and kept a low profile in Kabul but he was recognised, threatened and forced to sell it so he could move on.

He changed house for a third time and stayed with his parents but gunmen sprayed it with bullets, narrowly missing children. Again, Abdul, his wife and their four children moved home, only for him to receive telephone death threats despite regularly changing his number.

He said: ‘I worked for many years on the frontlines, coming into contact with the Taliban and their supporters from all over Afghanistan. They photographed me, they spoke with me, they know my name.

‘I questioned their prisoners, their spies… so of course there are few real hiding places in a country where a stranger will always be suspicious.

‘Many of the people I questioned are now free and want revenge. I know of interpreters whose families have been captured and butchered by the Taliban. No one should have to fear this.’

Headline in Daily Mail on April 28 this year

He said his brother, who faced the same dangers as a frontline interpreter for the British, had been granted asylum in the UK after paying people smugglers to reach England.

Abdul’s work and bravery was praised by UK officers after they were caught in several ambushes and IED attacks.

He said: ‘I gave three letters to the British – they still have them. These were posted through my door and that of my parents. Plus, I gave the details of private numbers the threats were made from but I was just told to move house or change numbers, which is the kind of advice a child could give.’

The Daily Mail’s ‘Betrayal of the Brave’ campaign, which has the support of MPs, former military commanders and soldiers, has highlighted dozens of cases of translators who say they have been ‘abandoned to the Taliban’ after working loyally for UK forces.

Last week the select committee said ministers had ‘dismally failed’ to protect interpreters and that those who were ‘dangerously exposed’ should be given a new life in Britain.