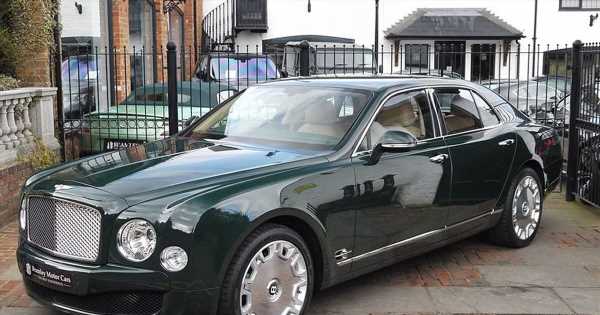 A classic car is now on the market, and this motor really is fit for royalty, because its previous owner is Her Majesty, The Queen.

The car itself, a beautiful 'Barnato green' Bentley Mulsanne, retired from the Queen's royal fleet in 2015, after driving the monarch around the capital between 2013 and 2015.

You can find it on sale at the Bramley Motor Car showroom in Surrey, but a car of this pedigree comes at a princely price. Offers for this car are currently in the range of £200k.

A low mileage runner, this car fit for a Queen comes with just 2,492 miles on the clock.

Jack Morgan-Jones, Bramley marketing manager, told the MailOnline "We are quite fortunate in the sense that we have had a couple of Royal cars.

"We sold a Range Rover last year that was used to transport the Obamas on their state visit and Prince Philip famously drove it.

The Queen's Bentley is such a unique car. It is fundamentally no different to any other Mulsanne but it has a fantastic history with it being owned by Her Majesty which is lovely".

Her Majesty's current Buckingham Palace fleet reportedly boasts three Rolls-Royces, three Daimlers and two Bentleys, and there are more fleets at her numerous other properties.

The car's special features include veneered picnic tables, fitted blue flashing lights, covert lighting and it doesn't even have a registration plate.

A similar car was sold by the same dealership, once part of Her Majesty's Windsor Castle fleet, to a German collector in 2019.

Mr Morgan-Jones adds: "This time it is her Buckingham Palace car which she sort of used for running errands, as it were, around London.

"It is a very special thing to have her cars and we always have interest. But because of the premium over a similar car, it has to wait for the right person to come along."

He went on: "It is a bit of a showpiece here in the showroom. It has had truly one careful lady owner. It is a lovely thing to be around because of the story behind it and it's a really good talking point now that we are allowed to have people in the showroom."

His company bought the iconic car in 2016 and had held it in storage, perhaps longer than it otherwise might have been due to the pandemic.

The car dealer's official sales copy reads: 'It is with great pleasure that we are able to present to market a very special example of Bentley's Mulsanne derivative.

"This Bernato Green motorcar was formally owned by HM Queen Elizabeth II and was in service with the Royal Household from 2013 – 2015 with its exclusive use being to transport Her Majesty.'

"This vehicle would make for an exceptional addition to any collection and it is extremely rare to find a car with such provenance and history, especially when related to our longest-reigning monarch."