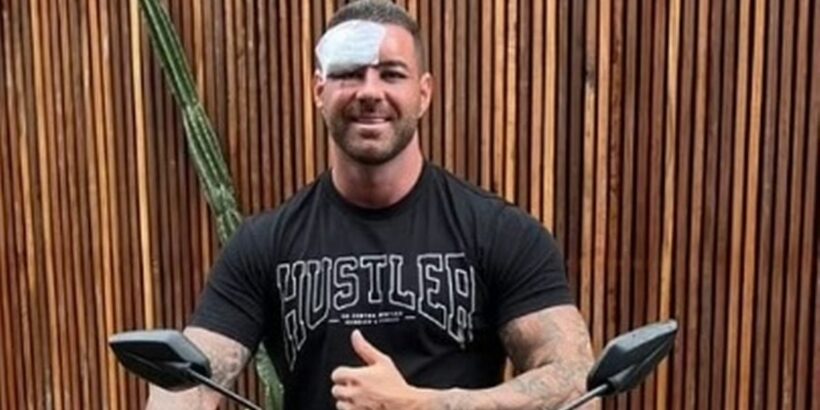 An ex-jailbird turned OnlyFans star suffered horrific injuries after a 30mph scooter crash into a brick wall in Bali – without a helmet.

Reformed Dale Egan, who spent four-and-a-half-years behind bars before becoming an OnlyFans star, was in Indonesia celebrating the end of his parole period when the incident happened.

The 32-year-old from the Gold Coast, was jailed in 2015 after committing a violent, drug-fuelled home invasion.

The former bouncer, who makes $1m a year as one of Australia's biggest adult film stars, checked into a villa at Canggu before the crash.

He arrived at 1am on Tuesday and, after waking up the next day, hired a scooter from the hotel with his friend.

However, he was left in considerable pain and required nearly 30 stitches in total after the crash, with shocking footage showing him driving the scooter into a brick wall.

"I just jumped on it and my mates said I did what's called a full whiskey throttle," he told the Gold Coast Bulletin.

He continued: "It maxed out its RPMs and I couldn't find the brake and didn't realise I was still holding the accelerator.

"It all happened so fast.

"I smashed into the wall at 50km/h and straight away my mate Lee was running over.

He said staff at the villa rushed him to an ambulance depot after the crash, before he was taken to an emergency hospital where he underwent eight hours of treatment to his forehead and legs.

"The skin on my forehead actually peeled right back off my face. It was pretty full-on," he said.

He also praised the hospital service in Indonesia and claimed it was "vastly superior" to the Gold Coast.

"I went back to the hotel and poured a vodka apple," he added.

"I thought I'm not going to let a little scooter crash ruin my holiday."

Since leaving prison Egan's activity on OnlyFans has seen him rise to the top 0.2 per cent of influencers on the adult platform in the country.

On Instagram, Egan made light of the incident again by posted the video with the Harry Potter theme music, alongside the caption: "I guess this isn't platform 9-and-three-quarters."