Caracas: A Venezuelan court has sentenced two former US special forces soldiers to 20 years in prison for their part in a blunder-filled beach attack aimed at overthrowing President Nicolás Maduro.

Lawyers for the former Green Berets, Luke Denman and Airan Berry, said they were barred from the secretive jailhouse proceedings Friday night in what they consider a violation of their constitutional rights to a defence. 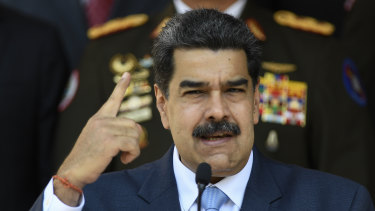 “THEY ADMITTED THEIR RESPONSIBILITY FOR THE FACTS,” Tarek William Saab announced on Twitter, adding that proceedings will continue against dozens of other defendants accused of assisting in the May 3 raid. He did not offer details.

“Operation Gideon" was launched from makeshift training camps in neighbouring Colombia and left at least eight rebel soldiers dead while more than 60 more were jailed.

Ex-Green Beret Jordan Goudreau, who operated a Florida-based security firm called Silvercorp USA, claimed responsibility for the failed attack and had hired his two former army buddies to prepare a small cadre of deserting Venezuelan soldiers living at the makeshift camps. Venezuelan prosecutors have ordered his arrest. Goudreau is believed to be in the U.S., where he also is under investigation f or possibly violating arms trafficking laws in connection to the botched incursion.

But lawyers for the men said the hearing was marred by irregularities.

Alonso Medina Roa said he was hired a month ago by the families of the two Americans but has so far been barred from meeting or speaking with his clients.

In violation of their constitutional rights to a defence, he said, Judge Máximo Marquez never informed him of Friday night’s proceedings at the headquarters of the SEBIN police, where the men are being held. They were represented instead by a public defender.

The two Americans arrested in a coastal fishing community have ever since been paraded by officials on Venezuelan state TV as proof of their long-held claims that the United States is set on violently overthrowing Maduro's socialist government.

The incident also prompted claims that US backed opposition leader Juan Guaidó had authorised Goudreau through a signed agreement to carry out the attack, executed by two of Guaidó's former political advisors in the US.

US officials have denied any role in the attack but have not said what knowledge they had about the clandestine camps in Colombia, details of which were made public by an AP investigation two days prior to the raid. Secretary of State Mike Pompeo said Washington would use all possible means to win the freedom of Denman and Berry.

Mark Denman, brother of Luke Denman, said in a statement that the families were “very disappointed” that the men were not represented by their private legal counsel.

“With the trial behind us, we are now focused on assuring that during their detainment their rights are adhered to. This includes humane treatment, access to adequate medical care, communication with their families and attorneys,” he said.

US officials also have demanded freedom for six jailed American oil executives from Houston-based Citgo, a subsidiary of Venezuela's state-owned oil monopoly, who had been lured to Caracas for a meeting and then arrested on corruption charges, which all deny.

A day before the two ex-Green Berets were sentenced, the corruption trial began for the so-called Citgo 6. The case had lingered since their arrest two years and eight months ago until former New Mexico Governor Bill Richardson met in July with Maduro in Caracas to urge they be released and returned home to the United States.

Richardson on Saturday said he would also work to free the convicted veterans, who are both natives of Texas.

“Luke Denman and Airan Berry are American citizens and military veterans who deserve our support," he said. "We will continue our dialogue with the Venezuelans to try to find a way to bring them back home to their families.”

Both cases play out amid hostility between Washington and Caracas. The Trump administration last year threw its support behind opposition leader Guaidó, who has been recognised as Venezuela’s legitimate president by 60 nations pledging to oust Maduro.

Guaidó blames Maduro for the once wealthy nation’s economic and social collapse, while the socialist leader, who is wanted in the US on narcoterrorism charges, says Washington is using Guaidó to steal the nation’s vast oil wealth.

Medina Roa said that while Maduro may be looking to negotiate a political deal with the U.S. for the Green Berets' release, authorities don't need to trample further on Venezuela's constitution to achieve their goals.