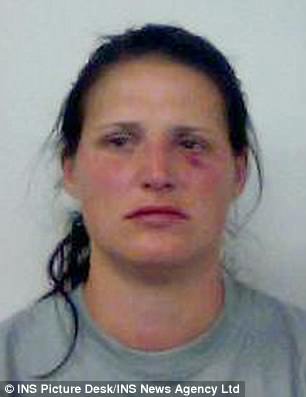 Rebecca Barnett, of Wood End in Banbury, bit her friend’s nose so hard, it was hanging off

A policewoman was jailed for 22 months today after biting her best friend’s nose so hard, it was hanging off.

Rebecca Barnett, who was pregnant at the time, launched her vicious assault at a children’s football club awards ceremony and chomped on the shocked woman’s nose in front of her children.

A judge who jailed her told Barnett: ‘You were a serving police officer, you should have known better.’

Disgraced Barnett, who has since given birth and has been sacked from the police, admitted the charges against her but was allowed to remain out of prison until she gave birth to her child.

The 33-year-old was sacked from the police for gross misconduct, having got into a fight with another woman while off-duty after an awards ceremony at the football club which both their children attended.

Judge Zoe Smith heard that whilst off duty, Barnett had been drinking Prosecco and had become involved in an argument with her friend 29-year-old Leanne Rawlins and a fight ensued.

She then grabbed Ms Rawlins and bit her on the nose, causing a significant injury, which required surgery and has left the victim with permanent scarring.

Ms Rawlins, who was good friends with Barnett and works as a carer, was left suffering from Post Traumatic Stress Disorder and nightmares after the event, broke down in tears after the judge jailed Barnett,

Sentencing her Judge Smith said: ‘You were a serving police officer, and you ought to have known better.

‘You and Ms Rawlins were good friends and I think your elder children both attended the same school. You were at Easingston Football club for a presentation. Not only were your children there but other’s children were present.

‘There was a conversation about parents taking drugs. She said she was going home and that made you angry. You threw down your glass and smashed it,’ said the judge.

‘You saw her and went towards her in anger. You called Ms Rawlins’ friends ‘coke heads’. She then asked you, Ms Barnett, if you were implying that she took drugs.

‘You punched her in the chest, grabbed her and you both fell to the pavement.

‘You held her ears while shouting at her. You moved your face in and bit her forcefully on the nose.

‘It was an appalling injury and Ms Rawlins nose was actually hanging off. She was taken to hospital and had two operations, but sadly there is still scarring there.

‘She describes feeling very depressed and suffering from nightmares and agoraphobia, or a fear of open spaces. She was also diagnosed with Post Traumatic Stress Disorder.

‘You have been dismissed from the police force where you had been working for some 13 years. This was an assault that took place in the presence of children.’

Corinne Bramwell, for the prosecution, had earlier told Oxford Crown Court: ‘The injury to Ms Rawlins was serious, the end of her nose was hanging off.

‘The police were called and she was taken to hospital and required plastic surgery. They were best friends’

The court also heard how at the awards ceremony the adults had been drinking prosecco. 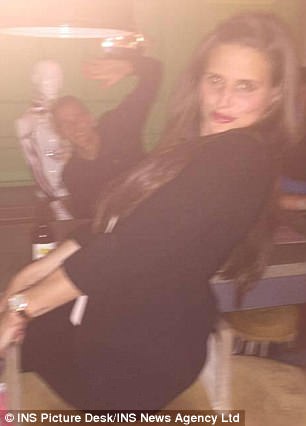 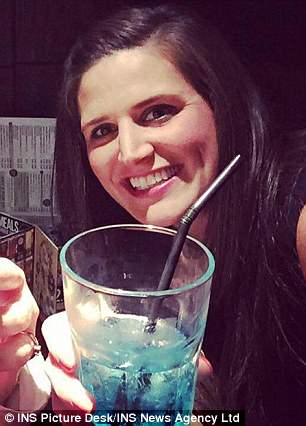 Barnett, who was pregnant at the time, launched her vicious assault at a children’s football club awards ceremony and chomped on the shocked woman’s nose in front of her children

In a victim impact statement read to the court, Ms Ralwlins told of the effects the incident had on her.

She said: ‘We had such a close friendship, she would call my dad ‘dad’.

‘My boys would ask how a police officer could do something like this. The police are supposed to protect them.’

Nadia Chbat, defending Barnett, said: ‘My client accepts that she behaved in the most deplorable way.

‘My client has two children and a baby, but she did not know she was pregnant at the time of the incident.’

Ms Chbat also told how Barnett had made plans for the two older boys to stay with their father and for the newborn baby to stay with her aunt.

Barnett, of Wood End in Banbury, Oxon., was sentenced to 22 months in prison having admitted inflicting grievous bodily harm during the scrap.

Barnett was sacked from Thames Valley Police following a misconduct hearing, where her actions where found to have amounted to gross misconduct.

‘Barnett has been convicted of a violent offence and it would be completely unacceptable for her to continue in her duties protecting the public as a serving police officer.’

The dark-haired former officer was dressed in a dark blue top and trousers at court and was handed tissues by a member of court staff as she entered the dock due to the tears falling from her face.

She looked on stoically as she was led to the cells. She was told she will pay compensation in the region of £7,000, as well as costs of £1,200.

Ms Rawlins and her family looked emotional but relieved when proceedings had ended. They declined to comment on the sentence.