A former elite soldier has told the Federal Court that he was involved in capturing an “elderly” Afghan prisoner in a tunnel during a mission with Australian soldiers in 2009, countering a claim by war veteran Ben Roberts-Smith that no men were taken from the tunnel.

Person 43, a former Special Air Service soldier who was medically discharged from the Defence Force in 2017, gave evidence in Mr Roberts-Smith’s defamation case on Thursday that he helped pull the Afghan man from the tunnel in a compound dubbed Whiskey 108 during the mission. 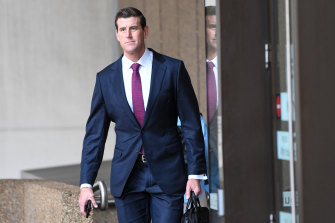 He said that the man was “PUCed … straight away”, meaning that he became a prisoner under the control of Australian troops. The man was handed over to the “TQ [tactical questioning] team”, he said.

He told the court that the tactical questioning team was led by Person 5, Mr Roberts-Smith’s patrol commander, but he said later that he did not recall who took the man away.

“He wasn’t resisting,” Person 43 said. Person 43 told the court that he was then a commander of another patrol, and he did not search the Afghan man himself.

Person 43 said that another soldier, Person 40, later asked him: “Where are the PUCs?”

He said that he replied with a “a bit of a vague comment”, along the lines of: “You know where they are.”

Person 43 said his comment was deliberately “up in the air” because he didn’t want to incriminate someone for something that he didn’t know had happened.

Person 43 was called on Wednesday to give evidence for The Age, The Sydney Morning Herald and The Canberra Times in the defamation suit filed against the mastheads by Mr Roberts-Smith.

Mr Roberts-Smith alleges a series of articles published in 2018 portray him as a war criminal. The newspapers are seeking to rely on a defence of truth and allege Mr Roberts-Smith committed or was involved in six murders of Afghans under the control of Australian troops, when they cannot be killed under the rules of engagement.

Mr Roberts-Smith maintains any killings in Afghanistan were carried out lawfully in the heat of battle, and that no men were discovered in the tunnel at Whiskey 108.

The newspapers allege that two men were taken from the tunnel and that Mr Roberts-Smith asked another soldier, Person 4, to shoot one of the men, and shot the second man himself.

Person 40, who is still serving with the SAS, gave evidence in the case on Wednesday that he was present during the Whiskey 108 mission and that two men were discovered in the tunnel.

He said the men were searched and “marched off to another area” for what he assumed was tactical questioning by Mr Roberts-Smith and a second soldier, Person 35. Person 40 said he later heard machinegun fire and saw one of the men, who had a prosthetic leg, had been killed.