A former Transport for London board member branded three suspected graffiti artists killed when a train struck them ‘common scum’, it was revealed today.

Brian Cooke, who was suspended by the Tories this year for calling a rival a ‘two-faced s***’, tweeted the extraordinary abuse hours after the tragedy at Loughborough Junction yesterday.

The three men – one 19-year-old and two 23-year-olds, all from London – were hit by an overnight freight train or a quiet but fast-moving commuter train.

Their bodies were found at 7.30am yesterday at a notorious vandalism hotspot and spraypaint cans were scattered on the track.

In response to a BBC report on the incident Mr Cooke, from Beckenham, south London, said: ‘Why do BBC News keep referring to the guys killed at Loughborough Junction as graffiti ‘artists’ they are no such thing they are common scum and criminals who cost the railway millions and keep fares high’. 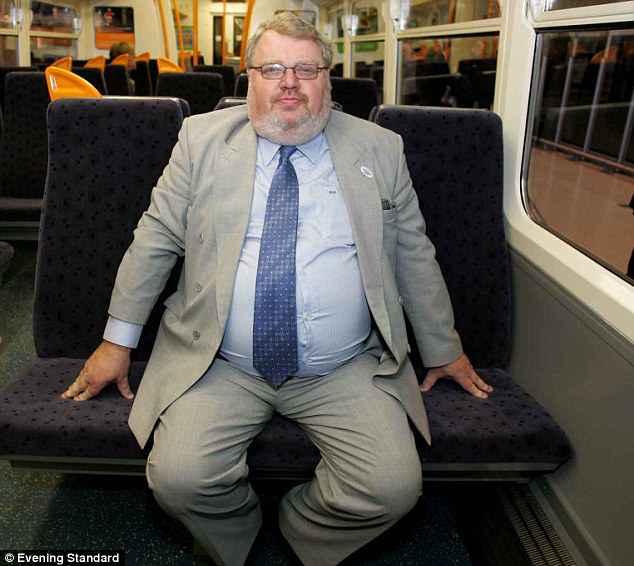 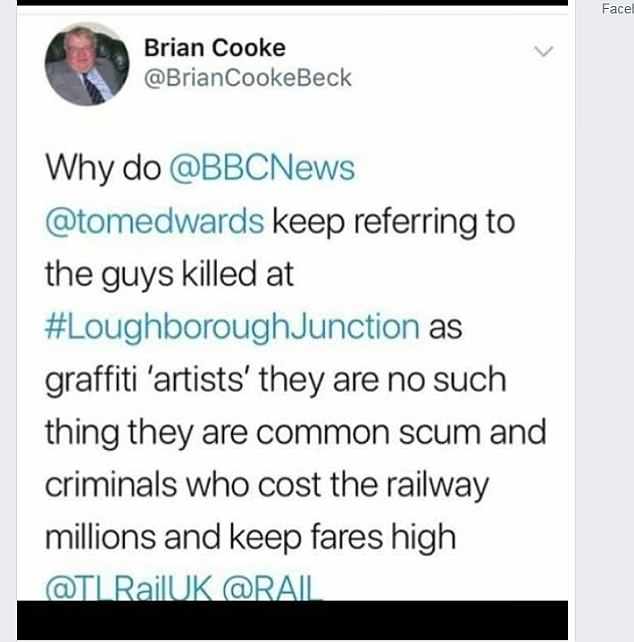 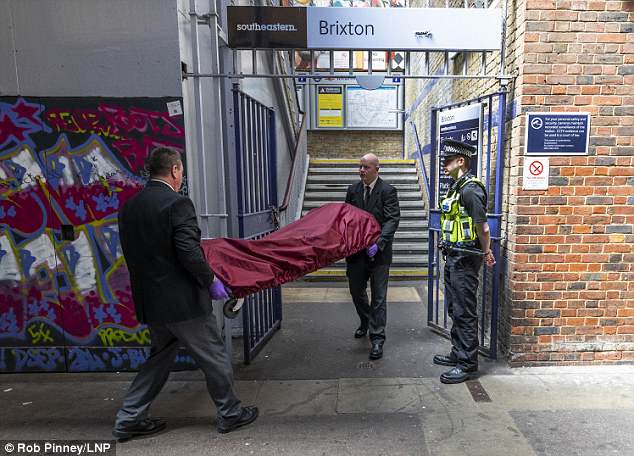 His message prompted fury online, with one critic responding: ‘What a horrible & disgraceful thing to say. They’re people’s sons, show some respect!’

Another wrote: ‘3 lives lost, undoubtedly a traumatised train driver… shame on you for such reckless and thoughtless comments and opinion on a tragedy spare a thought for their families before you type!

Mr Cooke has enjoyed a colourful political career and has lost a series of high profile posts because of his outspoken views.

In 2008 he was sacked as the head of London’s travel watchdog for ‘inappropriate political activity’.

He issued a statement declaring his support for Boris Johnson days before the mayoral election and called Ken Livingstone’s approach to transport policy ‘arrogant’ – breaching the terms of his contract.

In May this year he was suspended as Tory chairman for Beckenham after he reportedly called a former Liberal Democrat mayor a ‘two faced s***’ following a Twitter spat.

He also wrote that the Lib Dems ‘need exterminating’ and took issue with what he described as a ‘dishonest campaign’ by the rival party – leading to calls for him to resign.

Today police are trying to find out how the tragedy took place on an elevated stretch of track with no ‘refuge’ to escape the busy electrified line in Loughborough Junction, South London last night. 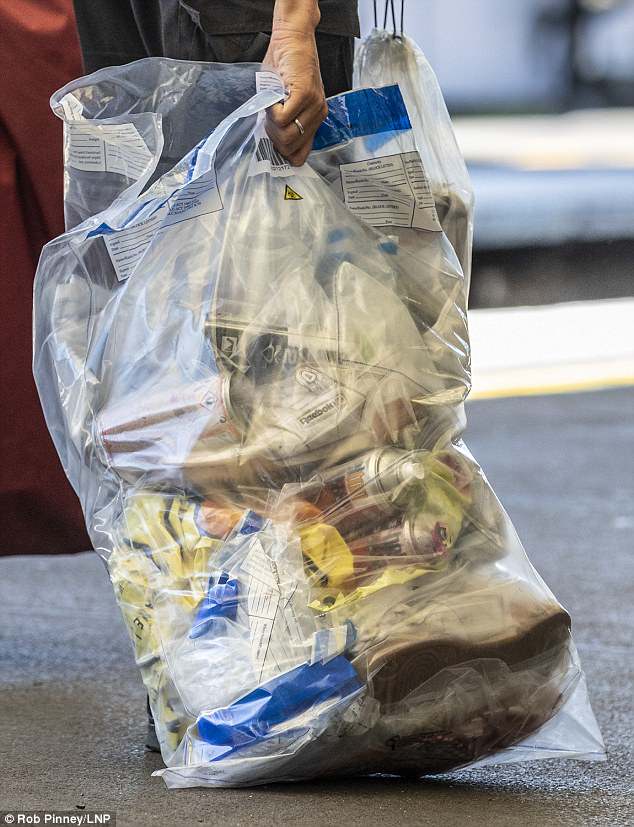 Officers were alerted to the bodies by a train driver shortly after 7.30am yesterday.

They launched a recovery operation on the section of the overground line which runs broadly west to east between Denmark Hill and Clapham High Street.

Investigators believe the tragedy took place in the early hours and are working to identify which train struck the men.

Spray cans, including a specialist brand used for graffiti, latex gloves and fluorescent vests were recovered.

British Transport Police Superintendent Matt Allingham confirmed that ‘one line of inquiry’ was that the victims were graffiti artists.

He said: ‘The bodies were discovered by a train driver. We know that they were dead for a while before we turned up. It is a possibility that it was during the hours of darkness.

‘There isn’t a sort of safe refuge up there, so if somebody was on those tracks there wouldn’t be anywhere for them to go to avoid the train. If they’ve been caught in that section of track when a train came through, they really wouldn’t have had much options.’

Scrapyard worker Mark Bowers said: ‘A police officer told me they think the men were doing graffiti when they were on the tracks. You see a lot of it around here, but I’ve never seen anyone actively spraying. It all happens during the night.’ 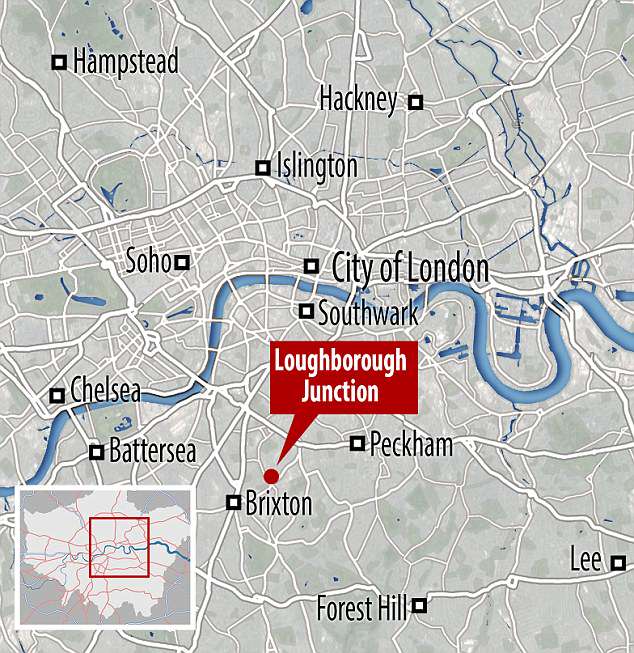 Loughborough Junction is between Herne Hill and Elephant and Castle on the Thameslink route  – but the line between Victoria and north Kent via Brixton, Blackheath and Dartford runs above it

Loughborough Junction is a stone’s throw from Brixton, arguably the most popular destination for graffiti artists from across the capital. Veteran artist Justin Rollins, 34, said the trio may have been ‘caught by surprise’ by a commuter train.

‘I don’t see any other reason why there are three guys walking down that stretch of track. The Thameslink trains are really quiet. You don’t always hear them coming. It might catch you by surprise.’

He added: ‘There are different sorts of graffiti, but if you’re in London, you don’t care. It’s a buzz, it’s an adrenaline thing.’

There were 399 graffiti attacks in London in the first quarter of this year, the highest number for eight years, according to official police figures. Southeastern, one of the hardest-hit train companies, said mural-type graffiti had ‘more than doubled’ in recent months.

An employee at spray paint stockist VapesLondon in Brixton said it was possible the men bought their supplies there as ‘it’s the only graffiti shop in south London’. He added: ‘The graffiti scene is a very close network. I had boys come in earlier saying, ‘did you hear what happened?’ ‘

Loughborough Junction resident Maureen Scott, 77, said: ‘This place is a bit of a hotspot for dare graffiti. They do it in all these tricky-to-reach places. They spray all along the railway tracks in this area.’

A police spokesman said last night: ‘Their families have been informed and are now being supported by specially trained officers.’