The force have detained 132 people – including in the most serious organised crime network in London – with more than £13.3million in cash seized among machine guns and narcotics.

One of the operations seized £5million in one go – which is the force’s largest ever single cash haul.

Many of the arrests were of seemingly-respectable people living luxury lifestyles, but hiding their secret criminal empires.

Incredible footage of one raid showed armed officers deploy nearly a hundred flash bombs in a 1.45am mission two weeks ago on a high-end property in the Home Counties.

Heartstopping bodycam footage shows them get into the building screaming ‘armed police’ as they gain access, with one man in his boxer shorts standing with his hands up. 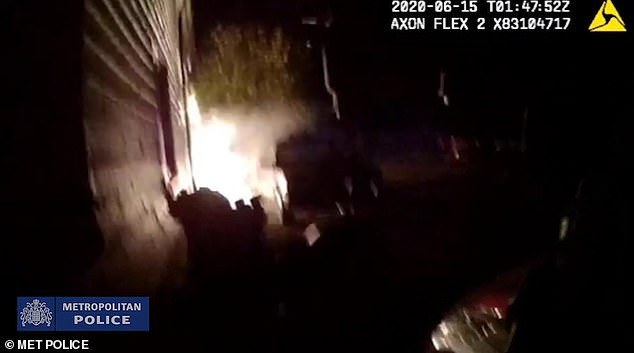 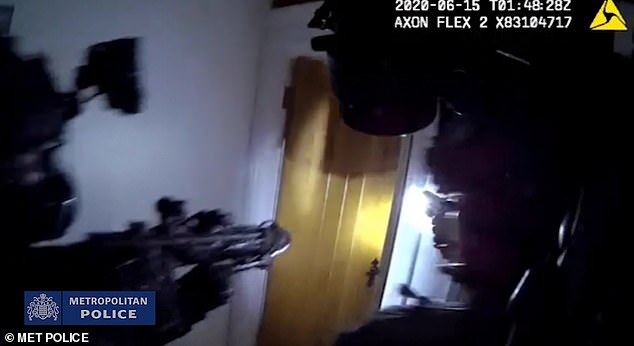 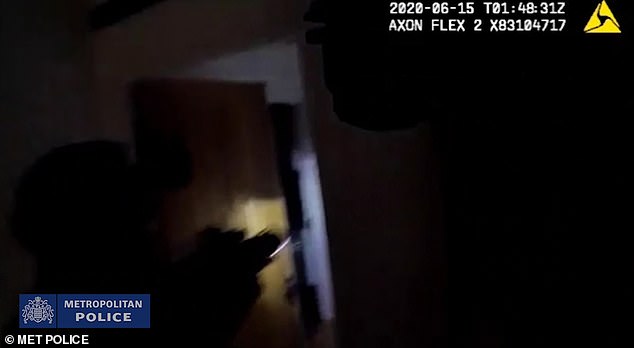 Footage from the dramatic raid saw armed police storm a luxury complex in the Home Counties, where they seized an imitation firearm and arrested one man

He was arrested on suspicion on large-scale importation of drugs and has been released pending investigation. An imitation firearm was seized.

A source said: ‘The flash grenades are used to disorientate when police arrive when they suspect the person could be armed.’

The vast operation – codenamed Eternal – has been made possible through a team-up between the National Crime Agency and European partners.

Data from an encrypted phone system called Encrochat has been shared with them identifying a number of serious criminal plots.

The international partnership – which has been named Operation Venetic – revealed there were approximately 1,400 London-based users of the secret call network.

Their handsets had allowed them to plot crimes, but the teams managed to infiltrate it and dismantle the system.

Commissioner Cressida Dick said: “This operation is the most significant activity, certainly in my career, we have ever carried out against serious and organised criminality across London.

“Organised crime groups have used encrypted communications to enable their offending. They have openly discussed plots to murder, launder money, deal drugs and sell firearms capable of causing atrocious scenes in our communities. They were brazen and thought they were beyond the reach of the law.

“Organised crime does not respect geographical boundaries. Those responsible for it adapt quickly and take advantage of every opportunity. This operation has enabled us to target those at the top of the hierarchy and individuals we have known about for years but have not been able to tackle head on.

“This offending has a direct impact on our communities – those involved appear to have an air of respectability, but their actions leave a trail of misery and are inextricably linked to the violent scenes we see play out on our streets. Our investigators, intelligence analysts, firearms officers, Territorial Support Group and our local officers have worked day and night over the past two months to progress our investigations as part of this operation.

“Through this work with our international partners, we have significantly developed our understanding of organised criminality in London and the ways in which some of our most prolific and dangerous offenders operate. This is just the beginning, there are many more people we are investigating. We know who they are and we have seen what they are doing and who they are doing it with. We will not rest until they have seen justice.” 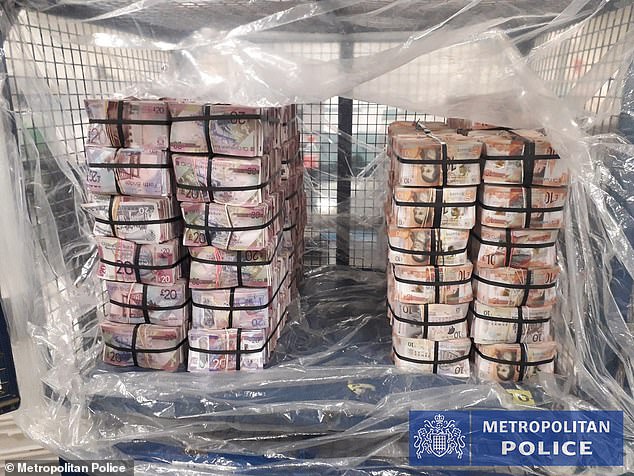 A total of £13million was seized in the operation, which saw £5million recovered in just one sting, the Met’s largest individual seizure

The data has been used by specialist detectives to build a case against criminals identified in the chats through analysis of hundreds of handsets and thousands of messages.

Crooks who had been previously completely unknown to the police were among those discovered at the centre of the web of illegality.

Arrests in 34 separate operations so far have seen arrests for conspiracy to murder, possession of firearms, money laundering and conspiracy to supply Class A and B drugs.

It has seen 99 people charged and 14 firearms recovered, including Scorpion submachine guns and revolvers and 500 rounds of ammunition.

A total of 36 encrypted devices, 620kgs of Class A drugs and 12kgs of Class B drugs were also nabbed by officers. 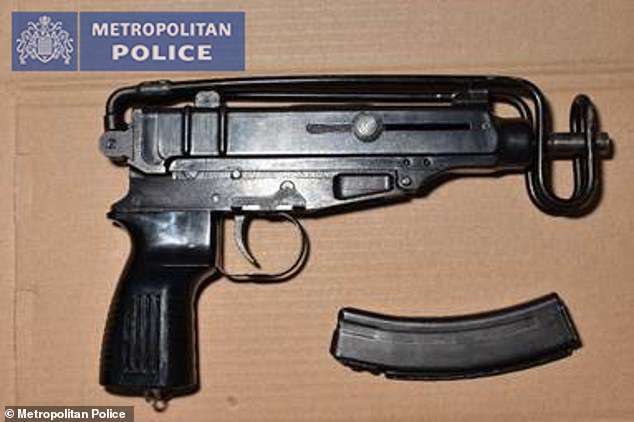 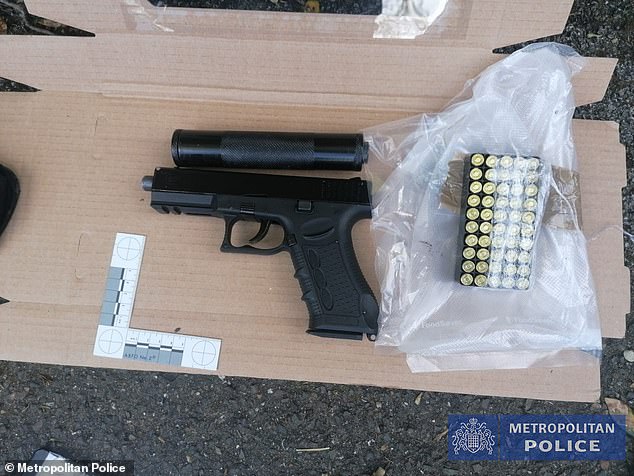 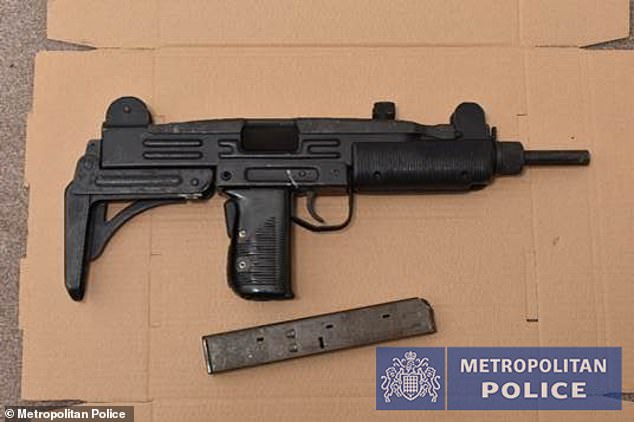 The raids saw 14 firearms recovered, including Scorpion submachine guns and revolvers and 500 rounds of ammunition.

One compromised network linked international organised crime and serious violence across London through a gang spanning the UK, Europe and UAE importing and distributing cocaine and firearms.

This unit planned to shoot and kill a member of a rival group, but they were able to be stopped before they acted with a loaded pistol believed to be the intended murder weapon found.

A Met spokesperson added: ‘This is the most significant operation the Metropolitan Police Service has ever launched against serious and organised crime 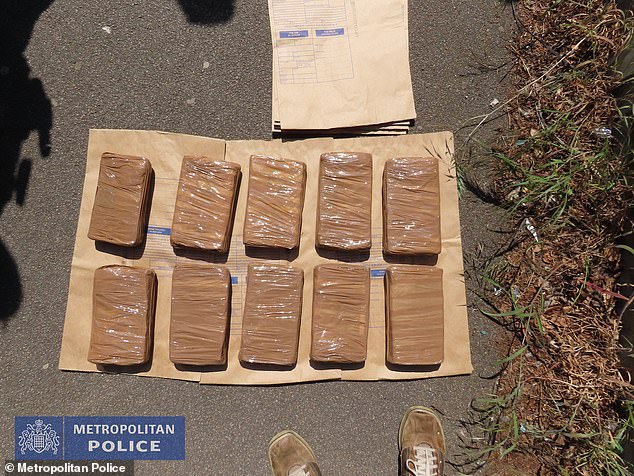 ‘Those arrested under one investigation were identified as being part of the most high-harm OCN in London with long-standing links to violent crime and the importation of Class A drugs.

‘The central figures of this group led lavish lifestyles, live in multi-million pound properties with access to top of the range vehicles.

‘They appear to be successful, respectable business people but they are dangerous individuals. Our enforcement activity against them reflects this – we used our most highly trained firearms officers and sophisticated tactics to arrest them at their addresses.’