Evidence shows that food is an unlikely route of transmitting the coronavirus across borders, but contaminated items continue to grab the spotlight, deepening the uncertainty over whether the $US220 billion ($303 billion) cold chain industry could be implicated in the spread of COVID-19.

China has repeatedly found traces of the pathogen on packaging and food, raising fears that imported items are linked to recent virus resurgences in Beijing and the port city of Dalian. In the nation's strongest action since it began testing food items in June, a major Chinese city on Sunday banned imports of frozen meat from coronavirus hotspots.

Cold-storage facilities and meat processing plants are ideal environments for the virus to spread, as the pathogen thrives in cold and dry environments. But there has been no concrete evidence the virus can be transmitted through food, and experts remain doubtful that it's a major threat. 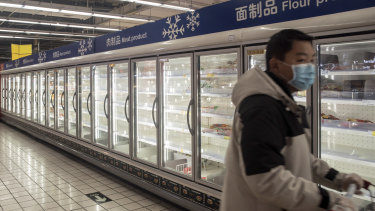 The virus has been found on shipments of frozen foods in the Chinese cities of Shenzhen and Yantai.Credit:Bloomberg

"We know that viruses usually can survive being frozen. So that means in theory it's possible that infection could spread that way," said Benjamin Cowling, head of epidemiology and biostatistics at the University of Hong Kong. "But in reality, it's a very low risk that that would happen because so many steps would need to be involved."

The virus would need to survive freezing and then defrosting. It would need to get onto someone's hands and then into their nose or mouth, and still survive. "I don't think it would be a frequent mode of transmission, but it is possible," he said.

Amid a lack of conclusive proof, China is taking precautionary steps, creating major disruptions with its trading partners. The Cold Chain Association of China's southern coastal city of Guangzhou ordered all member companies to suspend imports of frozen meat and seafood from coronavirus-hit areas. 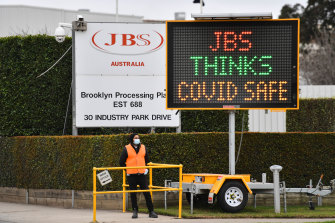 JBS meat plant in Brooklyn, Melbourne, has been linked to a major outbreak of COVID-19 last month.Credit:Joe Armao

The order was issued after the local government in the nearby city of Shenzhen found the virus on a surface sample of chicken wings imported from Brazil. Hong Kong has also suspended imports from that plant.

China has otherwise refrained from wider nationwide moves against imported meat due to the reliance of its population on the food source.

New Zealand originally considered the possibility that a new cluster, which suddenly emerged last week after 102 days without a local virus case, could have been linked to a cold-storage plant, as the first person to test positive worked at an Auckland Americold facility.

But preliminary findings from environmental testing at the plant have debunked the theory that the route of transmission was through chilled surfaces on materials arriving from overseas, Director-General of Health Ashley Bloomfield said. 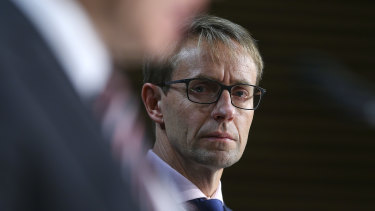 "The full report will have the details but it seems clear now that the possibility is being ruled out from that investigation," he said.

A key unanswered question is whether the traces that China has detected on the packaging and surface of frozen foods are still viable and infectious, or whether they're just dead and harmless vestiges of the pathogen.

"What we know publicly and what we've seen so far is that yes this virus can survive outside people for up to a few days, depending on the environment," said Sarah Cahill, senior food standards officer at Codex Alimentarius Commission, the body responsible for developing food standards under the World Health Organisation and the United Nations.

"But what are we actually detecting when we do these tests?" she said. "Are we just detecting RNA, which just means maybe this virus is no longer viable, or is that virus still an infectious agent?"

It is not uncommon for a wide array of viruses, bacteria and parasites to be transmitted through contaminated food. The WHO estimates that almost one in 10 people in the world fall ill after eating contaminated food, leading to 420,000 deaths every year. Salmonella and the norovirus on produce or uncooked meat and seafood can cause symptoms like diarrhoea and inflammation in the stomach and intestines.

While diarrhoea can be one of the symptoms of COVID-19 as well, experts are more focused on the possibility of the virus jumping from surfaces to human respiratory systems when people touch their faces after coming into contact with a contaminated item. Even then, some consider that scenario far-fetched.

"Theoretically, it's possible," said Takeshi Kasai, WHO's regional director for the Western Pacific region. "But so far our observations or the evidence coming from the past seven months of epidemiology: it is unlikely."