US songstress Mariah Carey's cover of the classic Christmas carol O Come, All Ye Faithful has been played in the Federal Court as former federal MP Clive Palmer claims he did not need a licence to use Twisted Sister's hit We're Not Gonna Take It because it copied the melody of the hymn.

Universal Music, which holds the copyright in Twisted Sister's 1984 anthem, is suing the United Australia Party founder for copyright infringement for allegedly using the song in political advertisements before the 2019 election. 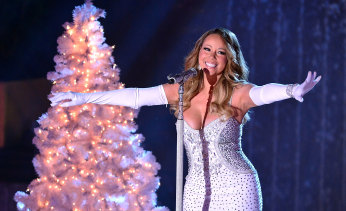 But Mr Palmer has alleged Twisted Sister frontman Dee Snider, who wrote the hit, "ripped off" the melody of O Come, All Ye Faithful and he did not need a licence from Universal to use the work.

The expert witness called by Mr Palmer's lawyers, Dr Robert Davidson from the University of Queensland School of Music, told the court "Mariah Carey's version of O Come, All Ye Faithful … is actually more varied" from an "original" version of the carol performed by the St George's Chapel choir "than is We're Not Gonna Take It".

He said on Friday he was not talking about "superficial" similarities but the "melodic contour" including intervals.

Universal Music's expert Dr Andrew Ford, who presents The Music Show on ABC's Radio National and has given evidence in a number of copyright cases, said Ms Carey's cover, tendered as evidence in court, kept the original tune and was "much closer" to the original hymn.

Dr Ford said Ms Carey's version was "encrusted with embellishments" rather like the hull of a ship might be covered in "barnacles". He agreed with Justice Anna Katzmann's suggestion this was almost "in a baroque way".

Mr Palmer told the court on Thursday he penned original lyrics to his own song, Aussies Not Gonna Take It, after inspiration struck at 3am one day in September 2018, although his scribblings were later thrown out by his staff. He claims he was not inspired by Twisted Sister but by actor Peter Finch's famous utterance in the 1976 film Network: "[I'm mad as hell, and] I'm not going to take this anymore."

Mr Palmer told the court he did not believe he needed a licence to use either the musical work or the lyrics because the former was not an original copyright work and he penned his own lyrics.

The Federal Court has heard a video producer applied for a licence to use the song in the advertisements in late 2018 but no deal was struck.

Mr Snider gave evidence on Tuesday that he realised years after penning his hit song that he had transformed the first six notes of O Come, All Ye Faithful into the chorus of We're Not Gonna Take It, but the "key word" was "transformed". It was a matter of unconscious "inspiration, not duplication", he said, and his work was original.

Justice Katzmann thanked the experts, saying "it's been very interesting, and we'll see what happens".