An explosion rocked a stadium where Zimbabwe’s president was addressing a campaign rally on Saturday, state media reported, saying he was not injured and had been evacuated from the scene.

State media called it an assassination attempt but said President Emmerson Mnangagwa was safely at a state house in the city of Bulawayo, where he had been speaking ahead of next month’s election.

Witnesses said the blast occurred as Mnangagwa had just finished addressing the crowd and was leaving the podium.

The country’s vice president Constantino Chiwenga and his wife sustained minor injuries from the blast, a source close to the president said.

The explosion was close to the VIP tent, witnesses said. Several people appeared to be injured, and footage showed medical staff rushing to the scene. 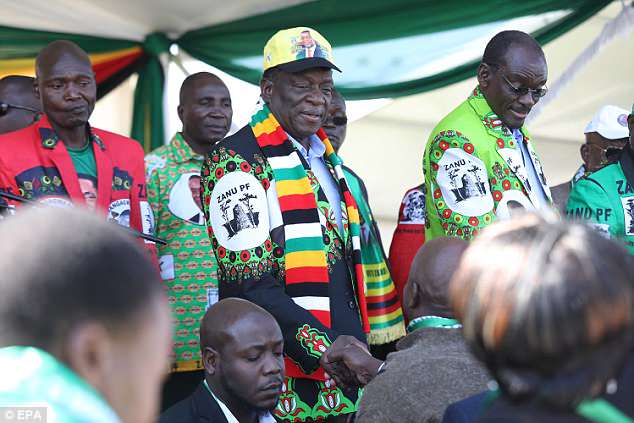 President Emmerson Mnangagwa was safely at a state house in the city of Bulawayo, where he had been speaking ahead of next month’s election, local media reported

The explosion came just hours after a similar attack in Ethiopia, where a blast killed at least one person and injured scores just after the new prime minister addressed a huge rally in the capital.

Presidential spokesman George Charamba told The Zimbabwe Herald that investigations were underway, and pointed out that there have been ‘multiple attempts’ on Mnangagwa’s life over the years.

The July 30 election will be the first without Mugabe in the southern African nation since independence in 1980.