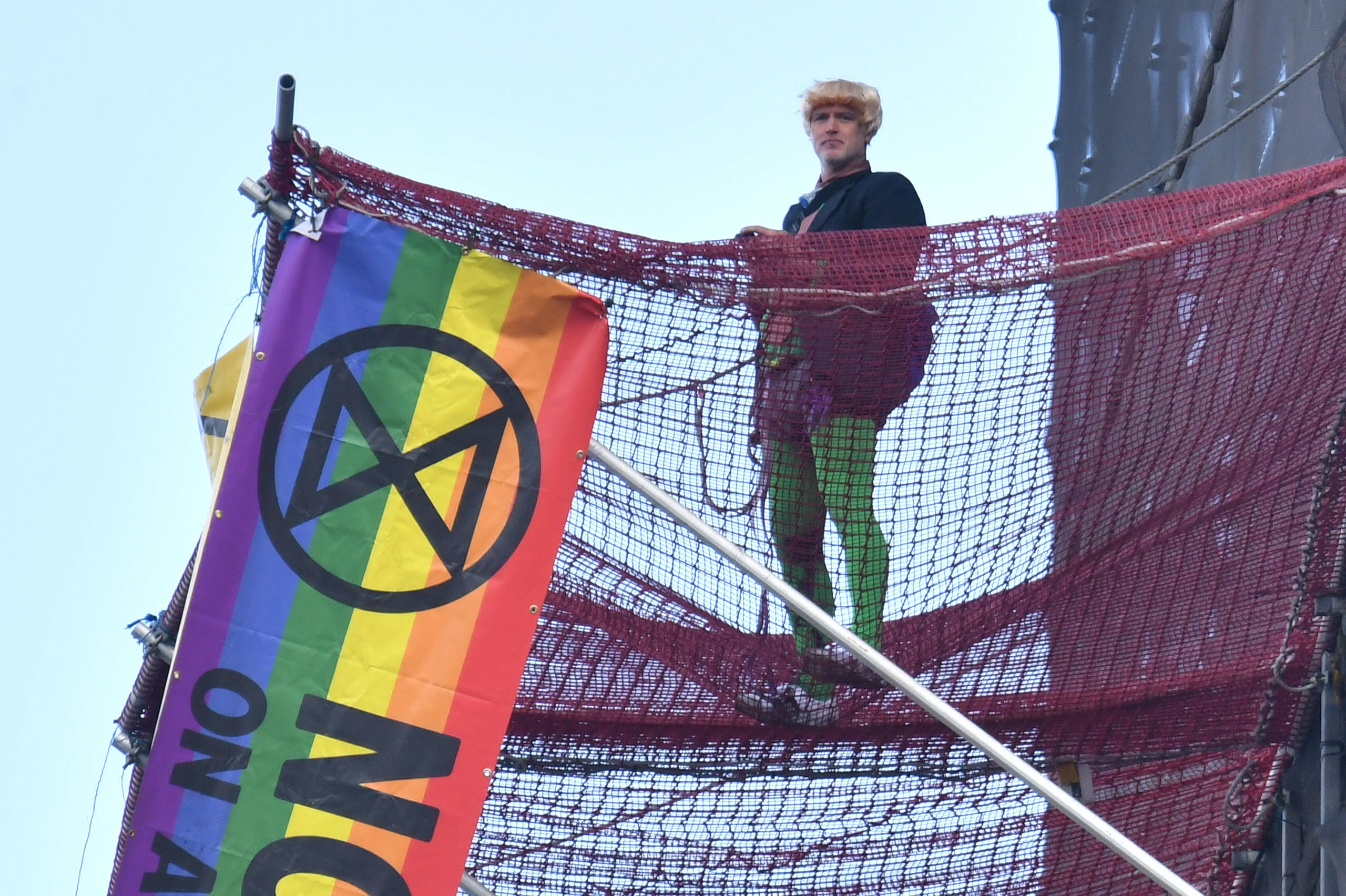 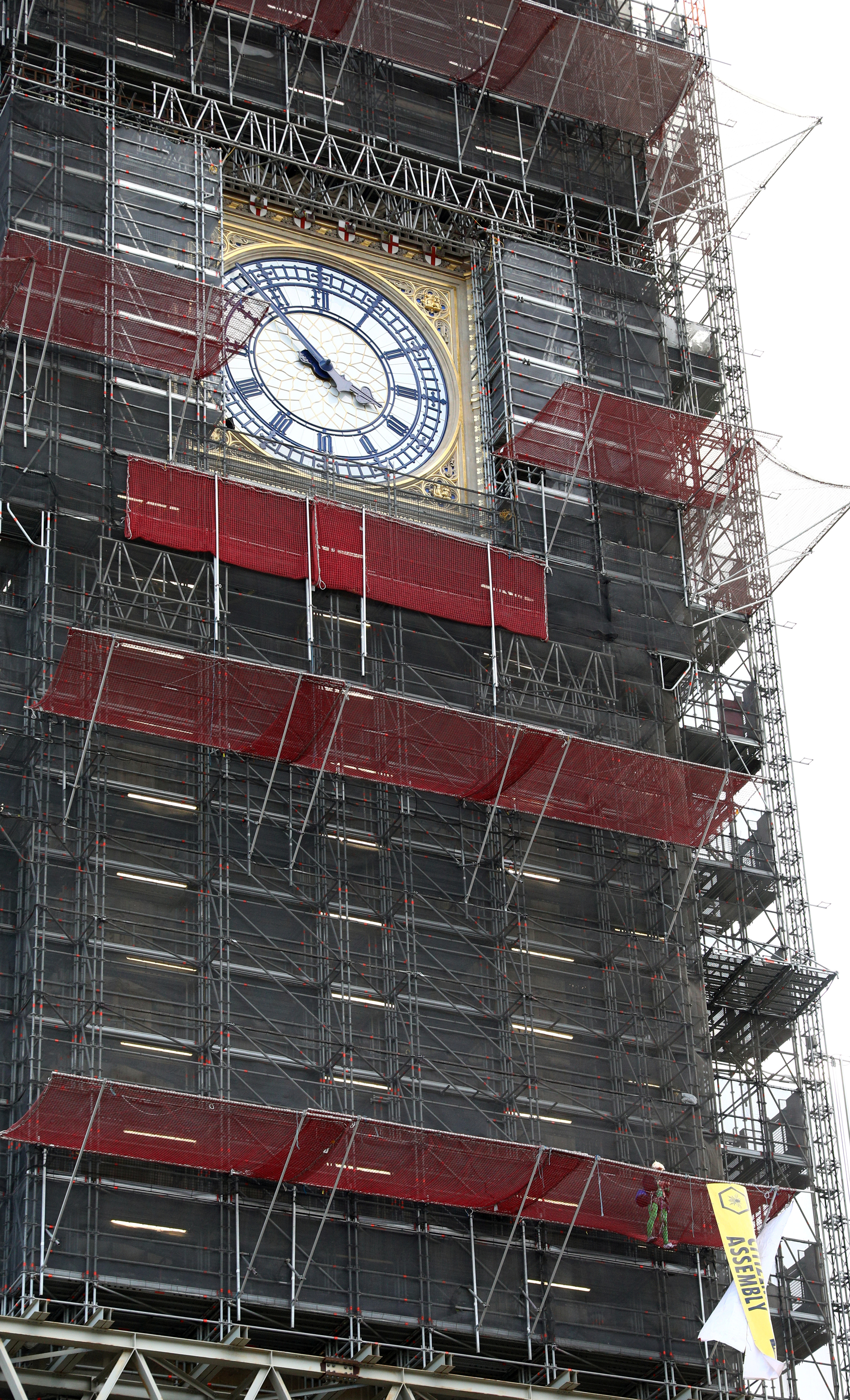 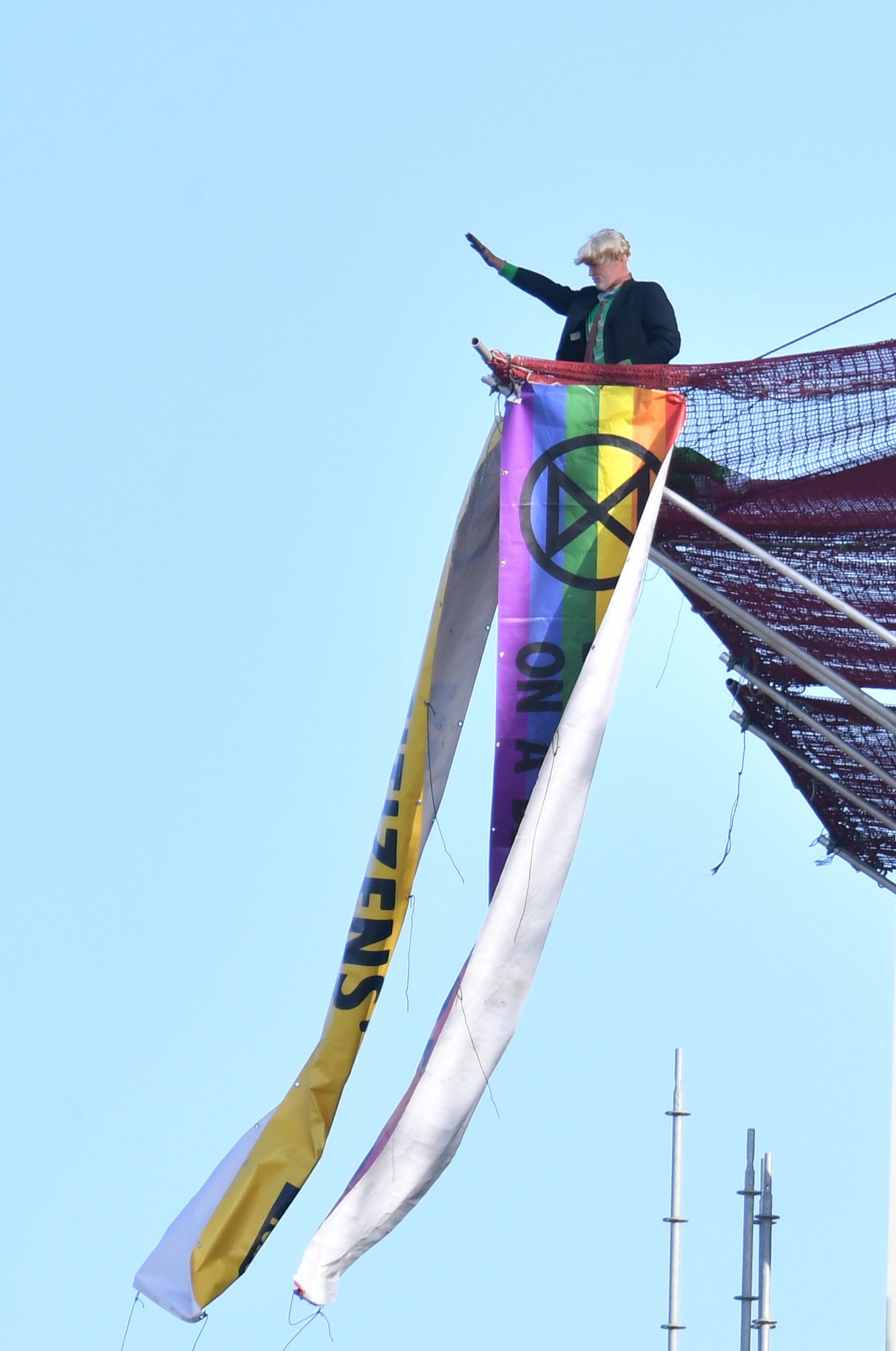 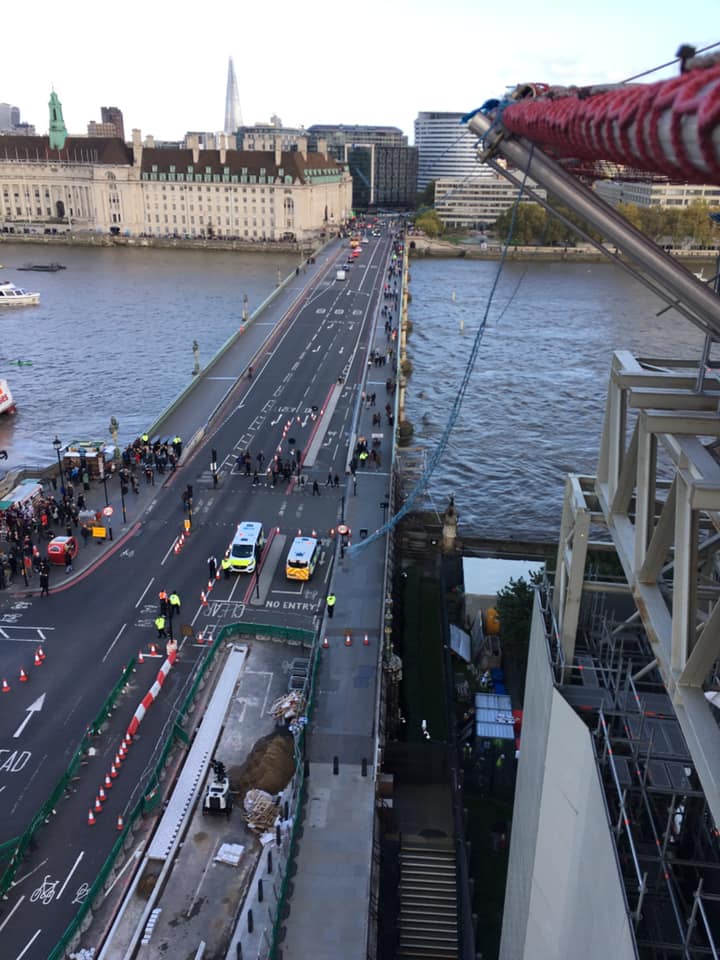 Sporting a blonde wig, and wearing a jacket and tie over a bright green leotard, the eco-warrior somehow managed to evade police as he scaled up around 80ft to Elizabeth Tower, which houses Big Ben.

Once there he walked along a scaffold gantry at the height of the roof of the Palace of Westminster, where he waved flags with the words "No pride on a dead planet", and another calling for a Citizens Assembly.

Onlookers said police officers had used a lift that is part of the scaffolding to reach Mr Atkinson and could be seen speaking to him as he sat in the netting.

Cops are asking people to leave the area directly in front of where the demonstrator is, and have closed the closest entrance to Westminster Tube.

Earlier he posted photos of himself on Facebook, writing: "Gone and done it… Extinction Rebellion. Here to stay.

"We got the declaration of climate emergency.

"Now, please Boris, you're struggling to navigate Brexit let alone work our way out of the sixth mass extinction event. Please. Pretty please…. let's get on with the citizens assembly".

Hundreds of Extinction Rebellion (XR) protesters have marched along Whitehall, past a heavy police presence at Downing Street ahead of a Cabinet meeting on Brexit.
Accompanied by drums, large flags and followed by at least 14 police vans, the activists marched towards Trafalgar Square where other protesters had gathered.

The tree-surgeon's stunt came within an hour of cops evacuating an area near Whitehall after a suspicious package was found. That area has now reopened.

Members of the decentralised civil disobedience group Extinction Rebellion are able to act without the group's consent, as long as they adhere to its main principles.

One XR protester said he had "no idea" that another activist was going to climb Big Ben.
"We all come from different circles but are all part of Extinction Rebellion," Harry, who did not want to give his last name, told the PA news agency.
"We don't want to bring down the system, we want to shake them enough to get some action."
Shortly before climbing the building, Mr Atkinson posted a photo of himself with a blonde wig, swimming goggles, blazer and tie, adding: "Ready steady breathe deep… go."

An attempt this morning to bring Oxford Circus to a standstill was thwarted when cops used a JCB to clear the obstructive teepee away.

More than 1,700 people have been arrested so far in an "International Rebellion", a fortnight of protests that ends tomorrow at 6pm.

Extinction Rebellion (XR) was founded just a year ago, in October 2018. It demands that the government achieve zero carbon emissions by 2025. They also call for a citizens' assembly to be formed to "oversee the changes".

A spokeswoman for the House of Commons said: “We are aware of a trespasser on the Elizabeth Tower which is being dealt with by the Metropolitan Police and the Parliamentary Security Department.”