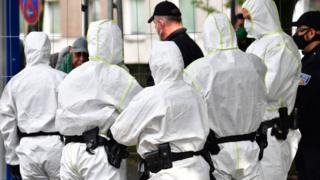 Police reinforcements have been sent to maintain a coronavirus quarantine on a tower block in the German city of Goettingen after violence on Saturday.

Seven-hundred people were placed in quarantine, but 200 trying to get out clashed with police.

The quarantine was introduced on Thursday after two residents tested positive.

By Friday, 120 were found to be infected. The vast majority of residents have been complying with the quarantine.

Anyone testing negative is being required to have a further test. If that is negative, they will be allowed to leave the block, but under certain conditions, such as wearing a mask.

Local officials cited communication problems, with many of the residents not understanding the need for a second test.

Translators have been used and information in German and Romanian is now being texted to those who need it, German media report.

Several police officers were injured as people tried to break through a security cordon.

Meanwhile, Covid-19 cases have continued to rise at a meat plant.

The number of positive tests linked to the Tonnies processing plant in north-west Germany has risen to 1,331. The authorities in the Gutersloh area told 6,500 employees and their families to go into quarantine earlier this week.

The regional prime minister of North-Rhine-Westphalia, Armin Laschet, warned of “an enormous risk of pandemic” while conceding that the outbreak was currently confined to the Tonnies company and could still be dealt with through a targeted lockdown.

The industry employs many foreign workers, and the local authorities are trying to arrange Polish, Bulgarian and Romanian translators to explain the need for restrictions.

In another development, Germany’s ‘R’ number has risen to 2.88 – the number of people who someone with Covid-19 could infect. A number below one is seen as necessary to contain the spread of the disease.

The Robert Koch Institute issued the data based on a four-day average. The seven-day average came up with a lower figure of 2.03.

The institute cited isolated outbreaks, such as the meat plant, for the rise.