Hurricane Helene which is swirling off the US coast behind ‘monster’ Florence could be on collision course for Britain, forecasters fear

A hurricane is brewing off the coast of the United States and could be on a collision course for Britain, forecasters fear.

Hurricane Helene is currently swirling in the Atlantic Ocean just behind Florence – a ‘monster’ hurricane which is expected to bring ‘catastrophic flooding’ and ‘damaging hurricane-force winds’ to parts of Carolina.

While Florence is not expected to pose any danger to Britain, Hurricane Helene could bring wet and windy weather on Monday.

As the week goes on, it is expected to make a U-turn and could end up on a crash course with Britain. 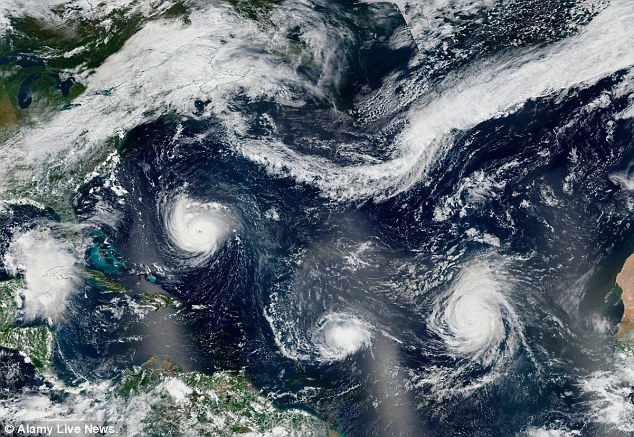 A dramatic satellite image shows Hurricane Florence, Tropical Storm Isaac and Hurricane Helene (left to right) in the Atlantic Ocean earlier this week. Helene could turn towards Britain later this week and bring wet and windy weather on Monday

Alex Deakin, a meteorologist at the Met Office, has said that the developments around the hurricane ‘will impact things quite a bit for the United Kingdom as we go into the early part of next week’.

He went on to say: ‘There’s a lot of uncertainty around the developments of that low pressure system.

‘It could bring some warm weather, but it could also bring some pretty wet and windy weather and the potential for some extreme weather’.

Emma Smith, another Met Office meteorologist, also spoke of how Hurricane Helene could impact on Britain.

She told the Mirror: ‘There is a chance Helene will be caught up in the jet stream and that would bring some wet and windy weather to the UK after the weekend.’

Any impact on Britain will pale in comparison to the ferocious weather due to hit the Carolina coast later this week. 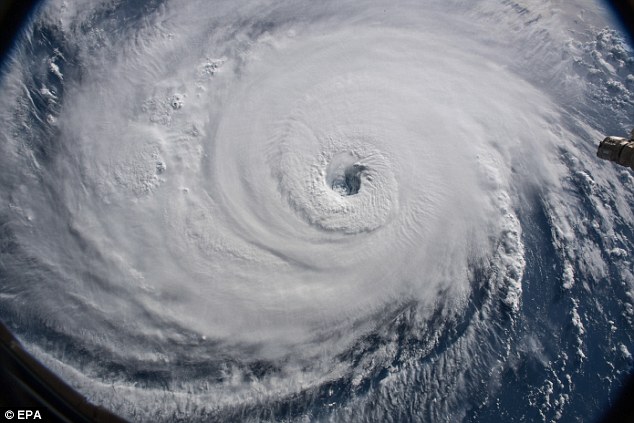 An image taken by Nasa today which shows the sheer size of Hurricane Florence as it heads towards the Carolina coast. It is expected to cause ‘catastrophic flooding’ and bring ‘damaging hurricane-force winds’ 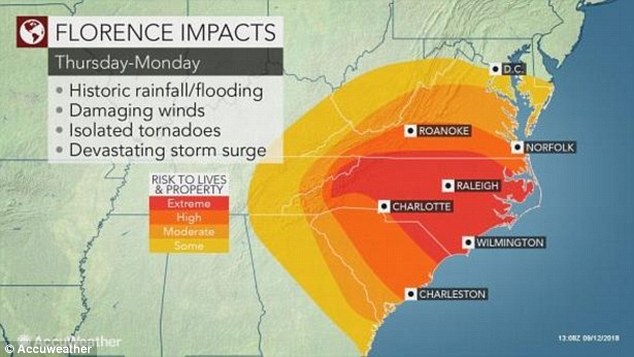 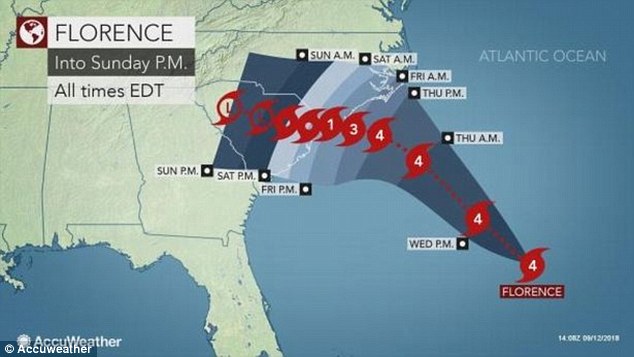 It is expected to hit the east coast late on Thursday or early Friday and will has been described as a ‘life-threatening’ hurricane.

Around 1.7million people have been warned to evacuate ahead of its arrival a state of emergency declared in North Carolina, South Carolina, Virginia, Maryland and Georgia.

The National Centre is warning of ‘life-threatening and catastrophic flash flooding’ and ‘damaging hurricane-force winds’.

Here in Britain, the weather for the rest of the week is looking to be a mixture of showers and sunny spells.

Friday will start with showery rain across Northern Ireland, northern England and Wales.

To the southeast it will be mostly dry with sunny spells. While there will be sunshine across Scotland with showers in the far north.

As we move into the weekend the outlook for Saturday is mostly dry but it is expected to be cloudier in the northwest with rain later.

There will be blustery showers in the north while is should remain dry in the south.

On Monday, the remnants of Hurricane Helene are expected to hit but uncertainty surrounds just how much of an impact it will have.