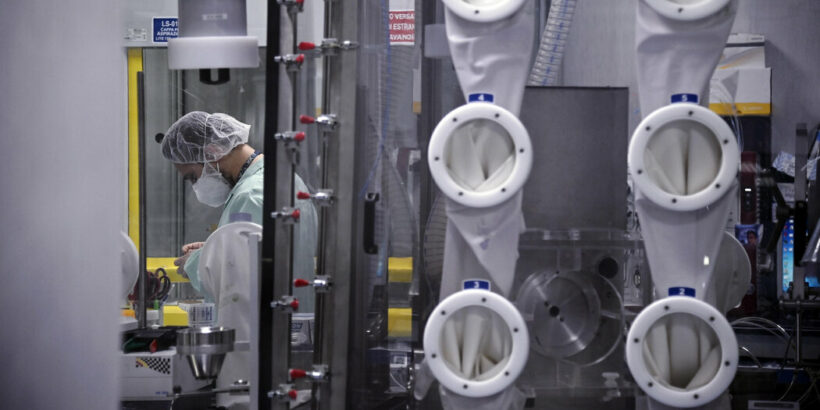 The Food and Drug Administration on Tuesday granted emergency use authorization to a Covid-19 therapy combining two monoclonal antibody drugs.

The approval of the treatment manufactured by drug maker Eli Lilly gives doctors another option for patients with Covid-19 who are not yet sick enough to be hospitalized but at high risk of becoming seriously ill. But even though such therapies got a publicity boost from then-President Trump and several other politicians who took them while sick with Covid-19, the drugs have been surprisingly underused in many places — even as hospitalizations soared through the fall and into the winter.

The newly approved therapy combines the company’s drug known as bamlanivimab — which was authorized in November and is being used for high-risk Covid-19 patients — with a second drug known as etesevimab. Both consist of artificially synthesized copies of the antibodies generated naturally when an immune system fights off infection.

“With the risk of resistance emerging as various strains of the virus arise, bamlanivimab and etesevimab together could potentially allow efficacy against a broader range of naturally occurring SARS-CoV-2 variants as these new strains spread around the world,” Dr. Daniel Skovronsky, Eli Lilly’s chief scientific officer, said in a statement.

Another monoclonal antibody combination therapy, made by Regeneron, is also authorized in the United States. Nearly 100,000 doses of that therapy have been shipped out.

The F.D.A. said in a fact sheet that the combination therapy may potentially have a key advantage over bamlanivimab alone — reduced risk of so-called resistant variants in patients who have been treated with the therapy. Detection of such variants is a sign that virus may be able to evade the therapy. The agency said that the combination therapy “may protect against treatment failure, should a patient be infected with a SARS-CoV-2 viral variant that is resistant to bamlanivimab alone,” though that question has not yet been studied in clinical trials.

The combination therapy must be given by a health care provider via an intravenous infusion lasting as little as 21 minutes. On Tuesday, the F.D.A. said that bamlanivimab alone could now be infused for a period as short as 16 minutes, down from an hour when the therapy was first authorized.

That long infusion time is one reason why monoclonal antibody drugs have not been more widely used in some places. Patients and their families have also struggled to access the therapies. Some hospitals have been too overwhelmed to prioritize the drugs. And some doctors have been hesitant to embrace them, saying they want to see more evidence from clinical trials supporting use of the drugs.