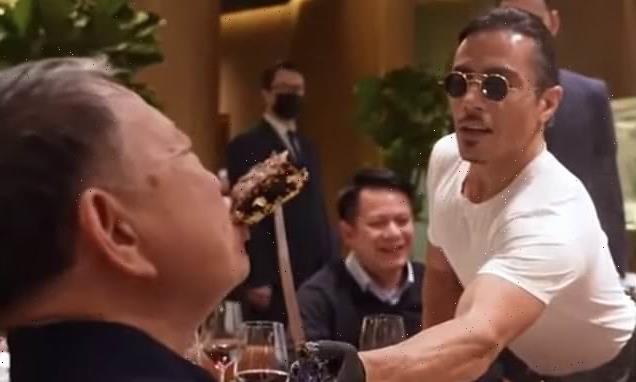 Facebook has unblocked the #SaltBae hashtag after it became unavailable when footage of a senior Vietnamese Communist Party official being fed gold-covered steak sparked fury online.

Meta, Facebook’s parent company, announced the hashtag had been unblocked today but refused to comment on whether Vietnam had demanded the video be deleted.

The original video was removed from Gokce’s TikTok account shortly after it was uploaded, and further copies have been removed from the app for violating ‘community standards’, Vietnamese users told Reuters.

It was not immediately clear why the video led to the tag being blocked and a Meta spokesperson declined to comment on potential reasons. While it was blocked, a search for the hashtag generated a message saying community standards had been violated. 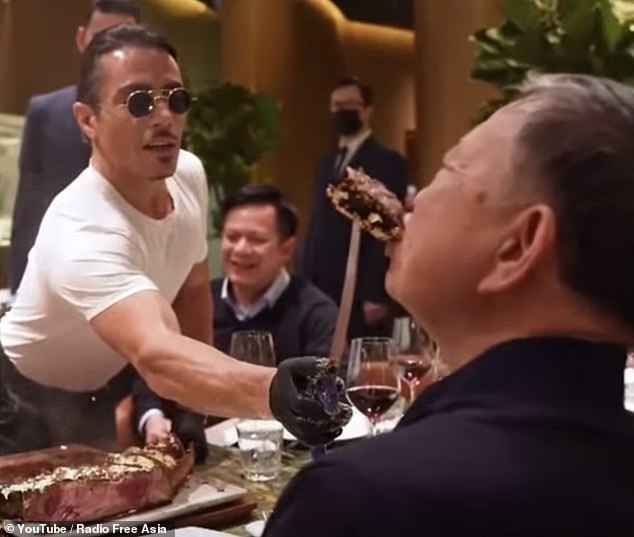 Footage of To Lam, minister of public security in the country, seemingly enjoying the £1,450 tomahawk steak at Nusr-Et Steakhouse in Knightsbridge, London, emerged on social media last night

‘We’ve unblocked this hashtag on Facebook and we’re investigating why this happened,’ a spokesperson for Facebook operator Meta said, confirming the tag had been blocked for all Facebook users around the world, not just in Vietnam.

In a US Congress hearing earlier this year, Meta Chief Executive Mark Zuckerberg said artificial intelligence plays a major role in ‘content moderation’, responsible for taking down more than 90 per cent of content deemed to be against Facebook guidelines.

Lam, 64, was in Britain during a visit by senior Vietnamese officials to the UN climate conference, COP26, in Glasgow.

But images of him chewing on the gilded beef caused a stir both on and offline in Vietnam, with many questioning how such a high-ranking Party official allowed himself to be caught on camera indulging in food carrying such a high price tag amid a state crackdown on corruption.

In one Facebook post, user Nguyen Lan Thang, with nearly 150,000 followers, changed his profile picture to a screenshot of the video, and pointed out that local media had been staying quiet over the incident.

‘Security officers following this account, have you seen the video of minister To Lam eating salt-sprayed beef? Do you know how many months salary you’d have to spend for just one piece of that steak?’ Thang wrote in one post.

It was not clear who paid for the meal. To Lam did not respond to a request for comment, nor did Vietnam’s foreign ministry, which handles foreign media enquiries. 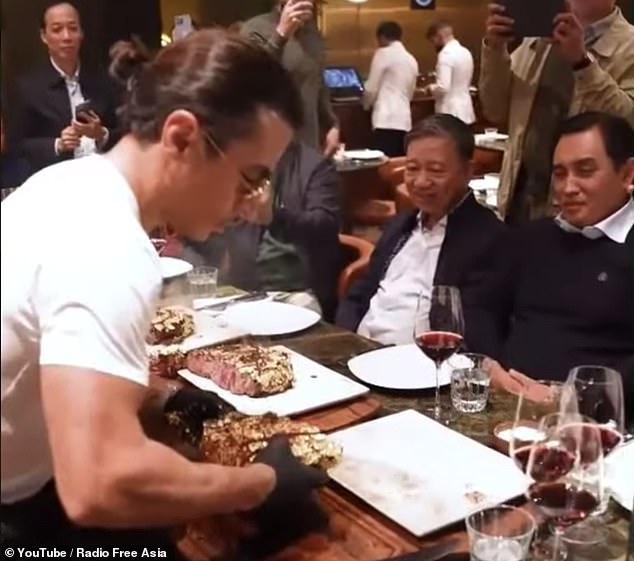 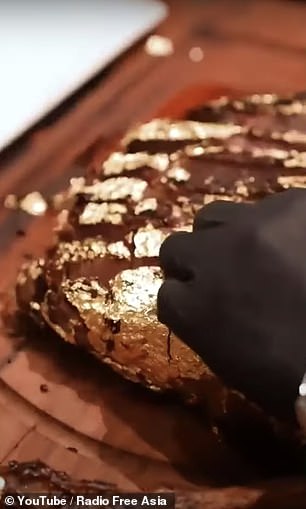 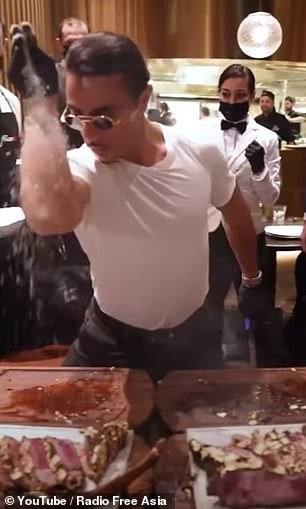 Turkish chef Nusret Gokce, better known as ‘Salt Bae’ cuts the steak for Lam (left), salts it in his signature pose (right), before feeding it to the official off his knife

The footage was posted on the restaurant’s Tiktok page and quickly deleted, but has already gone viral in Vietnam, where people only earn £112 ($150) on average a month.

Social media users slammed Lam – whose department monitors dissenters and activists in the authoritarian country – for having such an extravagant meal.

Dang Hoang Luong wrote: ‘Millions of people are suffering from Covid. No words.’

Konchag Norbu said: ‘Not only that, gobbling steak at a climate conference is the height of revolting indifference.’

Nguyen Huu Truong said: ‘Where did he get the money? His annual salary can’t afford that meal!’. And Bui Mang Tung added: ‘My tax money has been used for luxury.’

The video also appears to show Vietnamese ministry spokesman To An Xo sat next to Lam.

The footage also sparked outrage in Vietnam, where a customer at one cafe in northern Vietnam who declined to be named, citing safety concerns, said: ‘It’s not unusual that a government official is super-rich in Vietnam, but a minister seen widely opening his mouth to bite a golden steak is shameful’.

Vietnam is defined as a lower middle income country by the World Bank. A minister in the country is paid an official monthly salary of around 16 million dong ($705.47).

Vietnam routinely asks social media companies to censor content it deems to be ‘anti-state’. Last year, Vietnam threatened to shut down Facebook in the country if it did not remove more local political content from its platform.

Facebook declined Reuters’ requests for comment on whether the Vietnamese government had requested that the video be removed and had not responded to MailOnline requests at the time of publication. 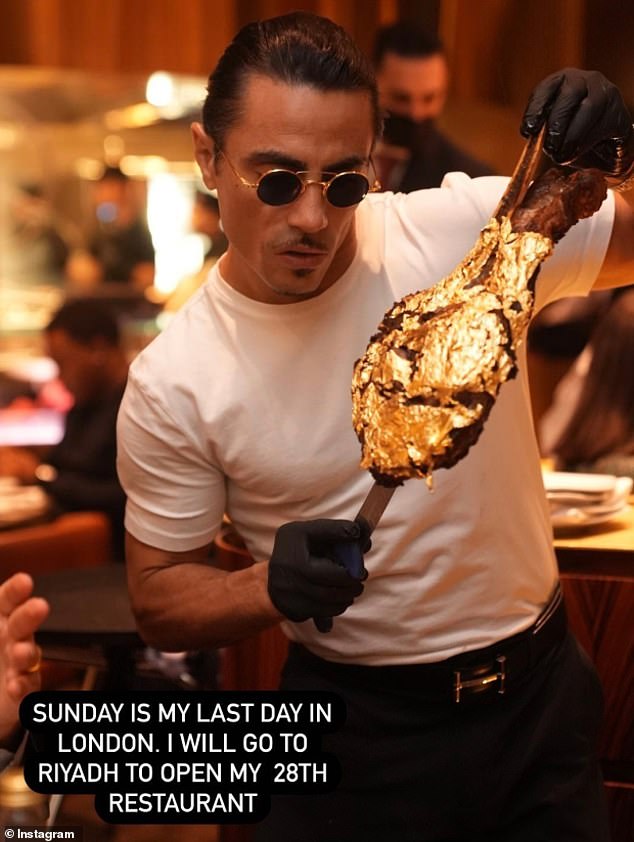 Sharing a picture of himself holding up a gold-covered Tomahawk steak – which costs £850 at Nsur-Et – he said: ‘Sunday is my last day in London. I will go to Riyadh to open my 28th restaurant’

Vietnam operates one of the largest and most sophisticated online influence networks in Southeast Asia.

Earlier this year, Facebook said it had removed some groups identified by Reuters as being part of a government influence operation for ‘coordinating attempts to mass-report content’.

To Lam is one of the most powerful officials in Vietnam, his ministry containing both Vietnam’s police and the agencies tasked with suppressing dissent and investigating corruption.

He had been touted as a potential candidate for state president in January’s leadership reshuffle, and has in his capacity as security minister worked to arrest Vietnamese officials accused of corruption and overt displays of opulence.

Earlier last week, To Lam had led a delegation of officials to the grave of Karl Marx to ‘remember the source of the water we drink’, the Communist-ruled country’s state media reported, citing a Vietnamese proverb about paying respects,

‘General To Lam’s visit to Karl Marx’s grave affirms the Vietnamese people’s tradition of ‘remembering the source of the water we drink’ for the figures who contributed to the direction of a dominated and suppressed nation,’ the security ministry’s official mouthpiece said. 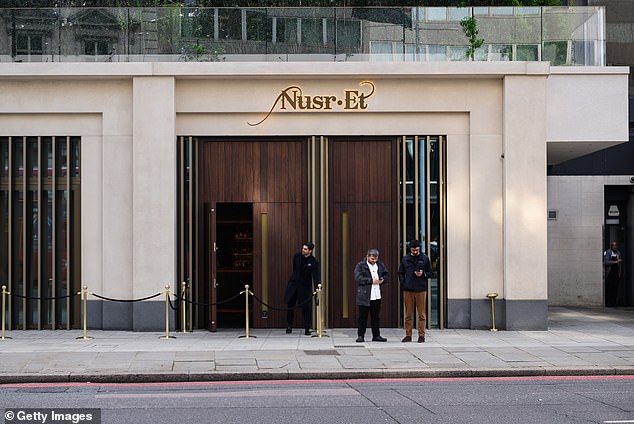 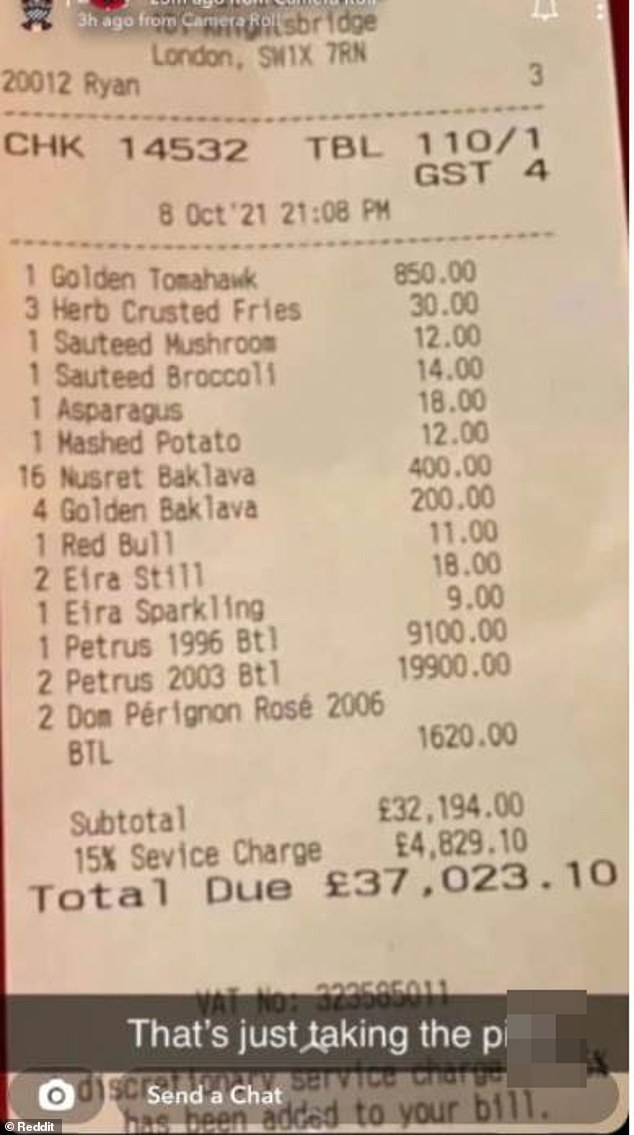 A customer has been slammed after spending £37.000 at celebrity restaurant Nusr-Et Steakhouse in London’s Knightsbridge

The restaurant has hit the headlines since it opened as a popular venue for celebrities including the Beckhams, Leonardo DiCaprio and Wayne Rooney.

Gokce, 38,  revealed last week it would be his last in London, with the restauranteur switching his attention to his new venue in Riyadh.

Along with London, Salt Bae owns restaurants in Turkey, Greece, the United States, and Dubai, among other locations.

Salt Bae – who became an internet sensation after a video of him theatrically seasoning meat went viral – opened his Knightsbridge restaurant in September to mixed reviews.

While the restaurant attracted a host of celebrity guests, many of whom swanned to the eatery to get pictures and videos with the man himself, it was slammed as ‘a rip off’ by others.

A receipt posted to Reddit by an anonymous user showed an eye-watering £37,000 receipt from October 8, with the service charge alone totaling £4,829.10.