Yes, he’s Britain’s kindest plumber – but he drives us round the U-bend!: Family of quiet hero who refuses to charge the elderly says he is too nice for his own good

‘No hot water?’ he asks, grabbing a pen to scribble an address on the back of his hand, ‘I’ll be with you this afternoon.’

Rushing out of the door on a fresh rescue mission, James’s wife Barbara vainly calls out ‘But you haven’t had your lunch, or even breakfast!’ Too late, he’s gone. 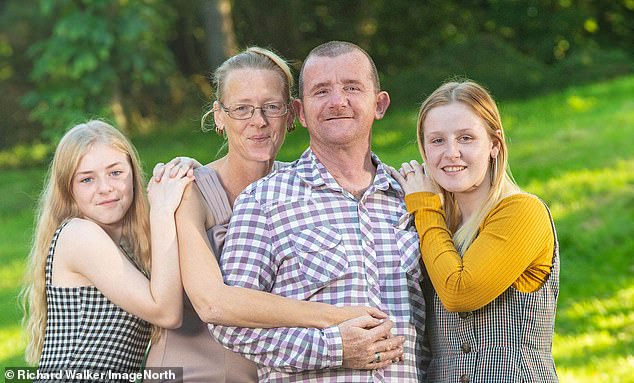 James Anderson is too nice for his own good, charging elderly and disabled customers ‘who can’t afford to eat and heat’ absolutely nothing. He is pictured with wife Barbara and daughters Annalise (13) and Paige (24)

As his van heads off for Blackburn, Barbara despairs: ‘I never know when I’m going to see him. He’ll drop his tea to answer his phone or even miss dinner to help someone.’

So in demand is the 52-year-old father-of-five, you could be excused for thinking he was minted enough to afford a gold-plated tap or two in his own end of terrace home in Burnley, Lancashire, when in fact he has £8,000 of debts.

The trouble is, James Anderson is too nice for his own good, charging elderly and disabled customers ‘who can’t afford to eat and heat’ absolutely nothing.

This week he was crowned Britain’s kindest plumber after it emerged he’d charged a 91-year-old woman with leukaemia the princely sum of £0 for repairing her boiler.

With his bill, he sent the note: ‘No charge for this lady under any circumstances. We will be available 24 hours to help her and keep her as comfortable as possible.’ 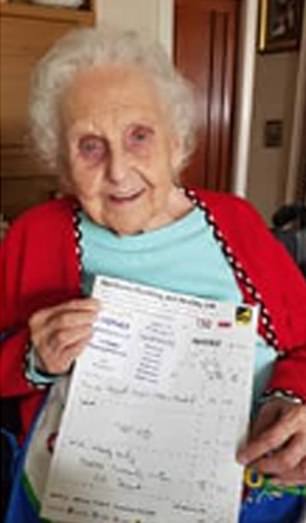 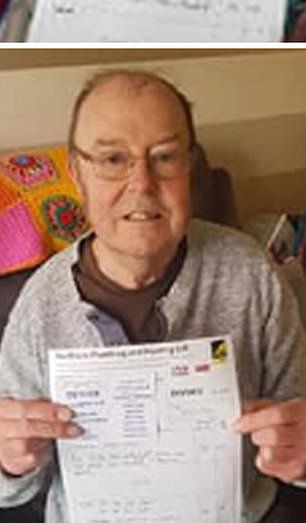 As far as Mr Anderson is aware, it is the only plumbing business of its kind in the world, reliant on donations and grants to offer free or discounted services to needy customers. Happy customers are pictured above

When the customer’s daughter, Christine Rowlands, read the email and saw the invoice waiving the £468 cost, she says: ‘I burst into tears. It was so kind.’

After Mrs Rowlands shared this all too rare act of generosity online, the story went viral and has today turned this humble grandfather-of-three into a modern-day hero.

For it turns out this was not a singular random act of kindness, but one of hundreds.

As we talk, an emergency call comes from the worried neighbour of an elderly lady, who has had only a kettle to provide hot water for two years because she has no money for repairs.

‘Two years? It’s just shocking,’ he says, shaking his head with disbelief. Sadly, it is only too typical of the kind of emergency Mr Anderson deals with.

‘He never says no, even though he has two hernias from lifting heavy boilers. It’s not about him feeling sorry for someone, for James it’s about doing what’s right. He’ll even bring them food, or give them money from his own pocket.’

What a wonderful antidote Mr Anderson is to those rip-off tradesmen who end up on a police ‘rogues gallery’ for fleecing vulnerable customers. 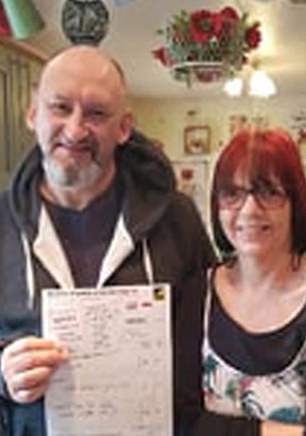 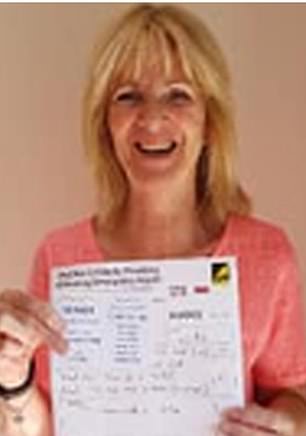 Mr Anderson was earning about £30,000 a year when two years ago he decided to launch a non-profit Community Initiative Company called Depher — Disabled and Elderly Plumbing and Heating Emergency Response. More happy customers are pictured above

However, as a business model it is unusual. Along with the £8,000 of debts he has accrued, he reveals that his unconventional practices have led to death threats.

These frightening anonymous calls, which also warn of damage to his van, he suspects come from other tradespeople furious at losing out on paying customers.

But he remains determined to continue volunteering his services free of charge for those most in need.

‘These are desperate times for some people and I can’t let an elderly or disabled person suffer or freeze to death because they haven’t got the money for repairs,’ he says.

‘While I am alive, that isn’t going to happen. I’d rather sell my trainers and wear sandals.’

Certainly, he has nothing else left to sell having already flogged his collection of antique cars, pocket watches and chessboards in order to keep his business afloat and his vulnerable customers warm.

‘There was one poor old 84-year-old lady who’d lost both her husband and her son,’ he recalls.

‘When I arrived at her house to mend her broken boiler, she was so desperate she had a plate of tablets in front of her and said she wanted to end her life. To be able to help someone like that is worth more than money.

‘If I could help every single one of Britain’s millions of elderly and disabled, I would. We’re all part of the same family living on a rock in space. If we don’t look after each other, it’s a sad place we live in.’

James, who was born in Liverpool, credits his mother Catherine, 71, for instilling in him the qualities he brings to his trade after his father walked out.

‘My father was a bus driver who went out one day and never came back,’ he says.

‘But my mum gave us the most happy childhood. There wasn’t much money, but we were fed and clean and there was plenty of love. She taught me to have compassion for others.’

James was a single parent to children Paige, Declan and Joshua, now aged 24, 22, and 19 after the break-up of his first marriage when he fell in love with Barbara, his second wife of six years.

Mother to Annalise, 13 and Thomas, 11, from her first marriage, Barbara was left with severe disabilities, after breaking her back when she was mowed down by a car aged 18.

Together they formed a contented and close ‘patchwork family’, but their happiness was almost destroyed when the couple’s son William died in 2013 at 16 weeks old following a bowel operation.

Born prematurely, weighing just 1lb 13oz and with a heart defect, his loss devastated the Andersons. Pictures of their boy decorate their home, and they have created a memorial in their front garden.

However, far from retreating from the world, consumed with grief, this tragedy — and Barbara’s own experience of disability — inspired them to help others instead.

Mr Anderson was earning about £30,000 a year when two years ago he decided to launch a non-profit Community Initiative Company called Depher — Disabled and Elderly Plumbing and Heating Emergency Response.

As far as he is aware, it is the only plumbing business of its kind in the world, reliant on donations and grants to offer free or discounted services to needy customers.

The idea was sparked after Mr Anderson saw an elderly disabled man poorly treated by another engineer, who’d landed him with a hefty repair bill and a £5,500 quote for a new boiler which wasn’t necessary.

‘The next day I couldn’t get this gentleman out of my head,’ he says. ‘I was furious with the way he’d been treated. I thought: ‘If this has happened to him, it’s probably happening all over the UK.’ That’s when I decided I had to do something.’

Mr Anderson spoke to his accountant, who registered his new non-profit company, and he used the money from his regular plumbing jobs to finance the free ones.

But with elderly vulnerable customers making up 90 per cent of his workload in the winter, compared with 25 per cent in the summer, there was a shortfall in funding so he raised £77,000 through crowd-funding and received other donations, including a £2,000 grant from the Duchy of Lancaster.

‘When I started out as a plumber, I just went for the best paid jobs, but now I take home £100 a week, which I give straight to Barbara. Everything else goes into the company or paying off the £8,000 debt.’

Though they live in a mortgage-free home paid for by Barbara’s compensation from her accident and mostly exist on her disability benefits, it’s been a tough two years, financially and emotionally.

Daughter Paige, 24, says: ‘I am really proud of my Dad, but it’s also been hard to sit and watch my parents struggle through all the sacrifices they’ve had to make.’

Barbara adds: ‘James was very down when he started to receive death threats and told me ‘Perhaps I should give it up’. But it’s something he has to do and I never tried to stop him, even though it was frightening.’

Of his decision to carry on, despite the threats, James says: ‘There were always going to be some people who thought I was too good to be true or out to take away their livelihoods. But it’s not about me.’

Since James was dubbed ‘Britain’s kindest plumber’ he has been overwhelmed by the response.

He says hundreds of tradespeople have been in touch offering their services for free, too, and a London firm wants to discuss joining forces to expand his idea nationwide.

Abroad too, James’ selflessness is inspiring others, with people in the U.S., France and Australia wanting to exchange ideas and set up similar companies. His vision is for free plumbing for every single vulnerable, elderly or disabled person in the UK.

He says: ‘I spoke to a woman from North Wales just yesterday who had an engineer quote her £2,500 to take out a toilet, put in three pieces of floorboard and then put the same toilet back. I was disgusted, so I told her: ‘Give me 14 days and ring me back and if I’ve got enough funds, I will do it.’

On call 24 hours a day, seven days a week, Barbara laughs when she says the downside of being married to the nation’s most caring tradesman is that he’s too busy to fix their own dripping taps.

‘It takes him a long time to do anything at home,’ she says, adding: ‘And when he does, he cuts corners so he can get back to the customers who need him.’