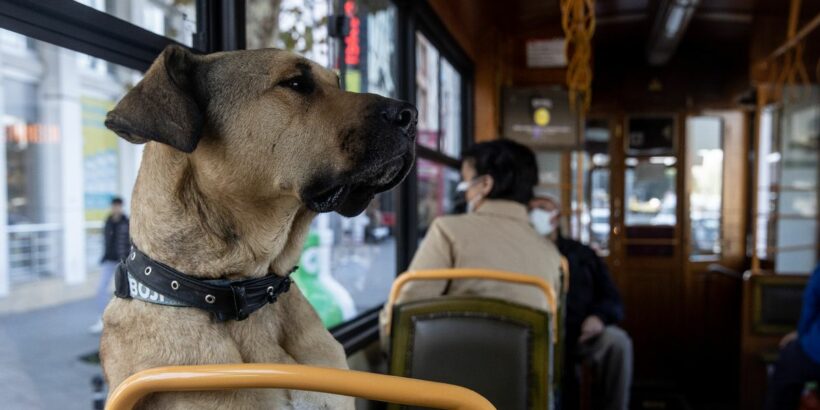 A dog famous for riding public transport alone was framed for defecating on a tram floor in a bizarre twist.

Calls for lovable Boji to be banned from buses, trains and trams were launched after a picture of dog poo was shared online in Istanbul, Turkey.

Earlier this year, Boji was welcomed into the hearts of commuters who often share part of their daily journeys with his own 18 mile trip.

Social media users responded to the foul snap blaming the stray animal, claiming he has out-stayed his welcome on Istanbul's public transport network.

An investigation into the faeces soon revealed that Boji was innocent of the filthy allegations as the perpetrator was caught on camera red-handed.

Someone shared a photo of the poo with the caption: "Boji, staff dog of IBB (Istanbul Metropolitan Municipality) defecated on the tram."

According to Daily Sabah, one person commented: "You spoiled him too much."

Another hit out at the poor dog, demanding: "Enough with Boji."

IBB, which runs a social media account dedicated to Boji, fiercely hit back at the accusation from the dog's perspective.

They posted a picture of Boji and his trainer with the text: "I was at home all day and did not go out. You stained the tram and you blamed me. You are evil."

IBB followed up Boji's defence by sharing a clip of security footage showing a weirdo planting the offending faeces on the very edge of a seat.

Vets have fitted him with a microchip tracker to see where his adventures take him as he hops on and off transport links as he pleases.

A Twitter account was last month created in Boji's name and has already racked up 60,000 followers keen to stay updated on his whereabouts.

"We had a chip fitted to check whether Boji is hungry or thirsty, to find out which trains he takes, and where he is," Mr Taskara added.