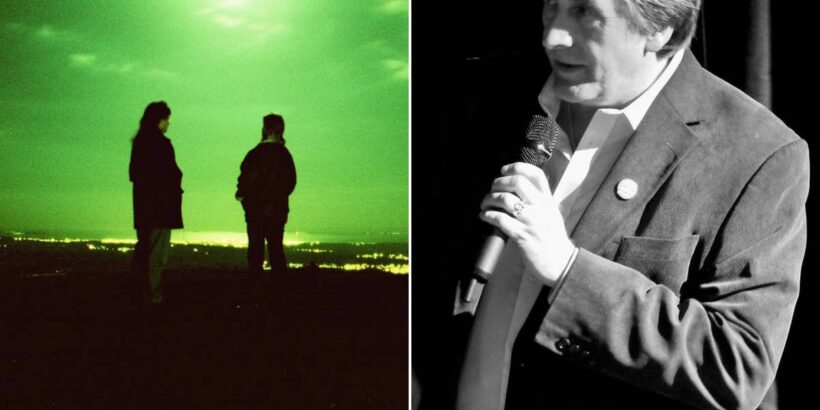 A paranormal expert has returned to Scotland in a bid to shed fresh light on a decades-old UFO mystery.

Malcom Robinson, a famous UFO hunter, made headlines back in 1998 with his investigations into UFO sightings in Bonnybridge, a remote village in Falkirk, Scotland.

Malcom, of Strange Phenomena Investigations, hit the news alongside Billy Buchanan, a local councillor, who was part of the investigations which took place in Bonnybridge.

The pair appealed to four prime ministers- David Cameron, Tony Blair, Gordon Brown and John Major- calling for an urgent probe into what was happening in the skies above the sleepy town.

Unidentified objects continue to be seen around what has been dubbed 'the Falkirk triangle' – which branches from Bonnybridge to Stirling and Fife in Scotland.

Malcom has lived south of the border in England for 23 years but has now returned to his homeland looking to 'continue where he left off' in 1998.

Now Malcolm says he is keen to get to the bottom of the mystery and would again be teaming up with the former councillor – who is now a Lord Provost.

He said: "People have heard I'm back and we're already getting in UFO reports from Falkirk and Grangemouth.

"Once Covid moves away and we can get out more to different locations, our aim is to look at all these new sightings, hold public meetings and of course look at Bonnybridge.

"It's exciting times and we're looking forward to getting on with our investigations again."

The Bonnybridge phenomena became public in 1992 when businessman James Walker said he noticed some strange lights in the sky while driving home.

At first, he thought they were stars but was startled when he saw them move and assumed a triangle shape.

Around the same time, the Sloggett family reported one of the most extraordinary sightings from the UFO hot spot.

They claimed to have been walking towards Bonnybridge at around 7pm on a clear March evening when they saw a circle of light ahead of them.

Malcom said that back in the 90s the political pressure on the Prime Ministers hadn't worked, and their calls for a probe were dismissed as the leaders were satisfied the UK's security wasn't at risk.

He said: "We went down to 10 Downing Street with our petition from the people of Bonnybridge… and it all fell on deaf ears.

"We were really annoyed and we hope to do something similar in modern times with Nicola Sturgeon and other ministers.

"Bonnybridge is a hot spot or window area that seems to attract a higher concentration of UFO reports than anywhere else.

"The million dollar question is why?

"There is nothing significant in the land of Bonnybridge, there are no military airbases or anything.

"We simply don't know. All we can say is the people of Stirlingshire are seeing things in the sky that do no conform to conventional aircraft or helicopters.

"There are certain things that just defy explanation and it's to those sightings that we are very keen to find out for sure."

He added that the vast majority of sightings were easily explained.

"I would put the figure at about 95% of explainable sightings. The 5% that remains of that 3% could be our own 'black budget' technology- something akin to stealth aircraft that was flying in the skies for many years and leading to false UFO reports.

"That leaves 2%- 1% of that could be new rare atmospheric phenomena something akin to ball lighting.

"The 1% that's left, the fly in the ointment if you will, are these classic UFO sightings that have not just been seen here in Scotland but the world over.

"Our job is to find out what exactly is going on with these and try and provide a rational explanation to the people of Scotland."

Malcolm added that the anticipated release of new UFO pictures from America could help solve the mystery.

He said: "It's causing quite a stir in the UFO community. A certain faction of the American government are keen to realise what they claim is some new UFO sightings that have never been seen before.

"This will allegedly be released in June this year.

"Needless to say any information of that magnitude will be world news… we are hopeful that the information will provide some form of answer perhaps.

"Or will it deepen the mystery even more?