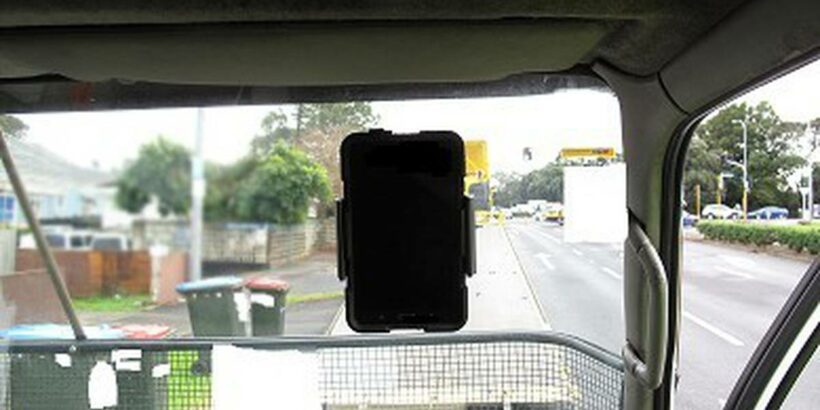 A crash that claimed the life of an elderly woman may have been caused by a tablet on the windscreen that blocked the view of the truck driver.

Auckland woman Valerie Stewart was struck by the truck while walking across St Lukes Rd in 2018. She died from her injuries two days later in hospital.

The truck that struck the 74-year-old had an electronic tablet attached to the windscreen, about 8cm above the steering wheel, and was obscuring the delivery driver’s vision.

Coroner Heather McKenzie said the death highlighted ongoing issues around the unregulated use of tablets and similar devices while driving.

“In my view, the tablet’s placement was a significant distraction and impediment for the driver in terms of overall driving vision, concentration, and safety,” she said in a report released today.

“I recommend that Police, WorkSafe, and Waka Kotahi NZ Transport Agency undertake a joint safety campaign regarding the safe use of electronic tablets or other similar devices in vehicles.

Drawing greater public attention to the issue will reduce the chances of further deaths occurring in similar circumstances.”

The risks of mobile phone use while driving is currently a focus of various agencies’ safety campaigns, and their use is regulated by the Land Transport (Road User) Rule 2004.

“As a committed Road to Zero partner, our dedicated road policing staff are out on our roads every day targeting and preventing unsafe behaviour to reduce the number of deaths and serious injuries on our roads,” said Superintendent Steve Greally, Director Road Policing.

“Any death or serious injury from a road crash is one too many, especially if it could have been prevented.”

There aren’t any statistics for the use of tablets and similar devices, despite being commonly used in delivery trucks, courier vans, and recovery vehicles (tow trucks), or as GPS navigation aids.

Road Transport Forum chief executive Nick Leggett said the road is the workplace for truck drivers, so any death involving a truck was felt acutely by the industry.

“Distraction is one of the big contributors to road accidents across the board, particularly involving looking at electronic devices while driving, or having them in the driver’s line of sight.”

He said the industry would the coroner’s findings on board and continue to work with government agencies to raise awareness about the use of tablets and similar devices truck drivers use for work purposes.

“It takes a sustained period of education to change behaviour and we are on board for that.”