‘I’ll fight to the end to find my daughter’: Father of toddler who went missing in Germany 37 years ago blasts military police for blunders in original investigation

The father of a missing British toddler who vanished 36 years ago in Germany has said he’ll ‘fight for my daughter until the end’ as he returned to the spot where she was last seen.

Police are excavating a riverbank as they hunt for any trace of Katrice Lee, who went missing on her second birthday in 1981.

A hundred soldiers will spend five weeks on a forensic excavation of the banks of the river Alme in Paderborn, 70 miles south-west of Hanover.

Katrice disappeared from the NAAFI shopping centre in Schloss Neuhaus, close to the military base where her father was stationed for the Army.

Richard Lee described his visit to an excavation site on the banks of the River Alme as ‘a return to his nightmare’.

He also blasted the Royal Military Police for their blunders in the initial investigation. 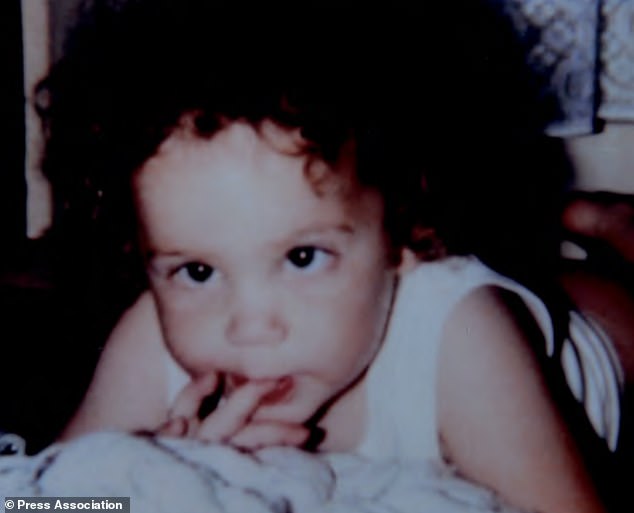 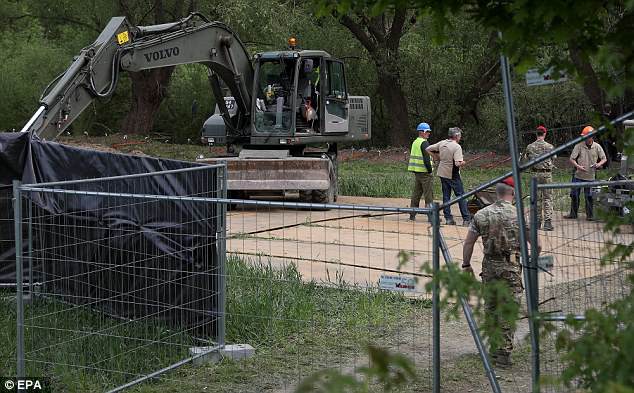 Royal Military Police are digging up a riverbank as they look for any trace of Katrice Lee, who went missing on her second birthday 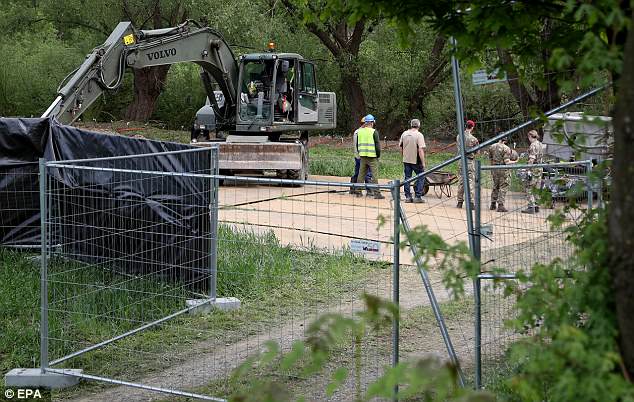 The search effort is focused on the banks of the River Alme in northern, rural Germany 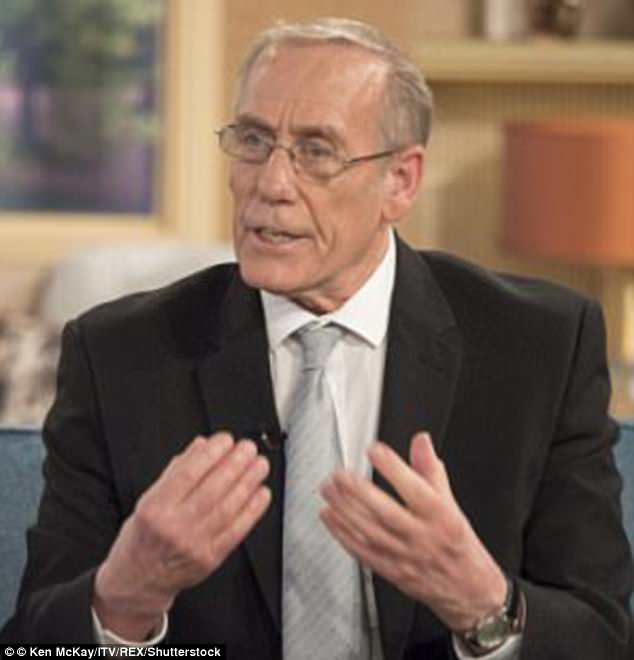 He said, during the initial investigation, border guards were not informed when Katrice disappeared, statements from shop workers were not taken until six weeks later and information about an eye condition Katrice had was not made known.

Mr Lee, now 68, travelled from Hartlepool with the town’s MP Mike Hill, who lobbied the Ministry of Defence to carry out the fresh search.

The 68-year-old welcomed the search but said it should have been done years ago.

He said: ‘We’ve just got to do this. I don’t want them to find anything, but honestly, I am struggling.

‘It’s a killer, absolutely a killer. It’s a return to my nightmare.’

He added: ‘I feel bitterly angry and will never forgive the RMP for what they’ve put my family through. I will fight for my daughter until the end.’

He said his now ex-wife Sharon and other daughter Natasha, 43, were unable to make the trip to Germany.

Heavy equipment arrived on Monday to begin the excavation of a 328ft (100m) stretch of the riverbank in Paderborn. 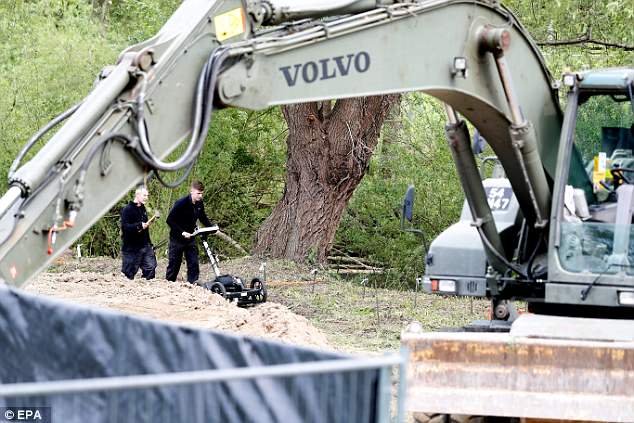 Investigators believe Katrice, who had been shopping with her mother when she disappeared, may still be alive having been abducted but have little memory of her early years

Katrice had been shopping with her mother Sharon on what was her second birthday when she disappeared.

Despite a vast search effort undertaken at the time by the Royal Military Police (RMP), German police, British troops and volunteers, the trail went cold.

The case, which has chilling similarities to season two of BBC drama The Missing, remains unsolved. 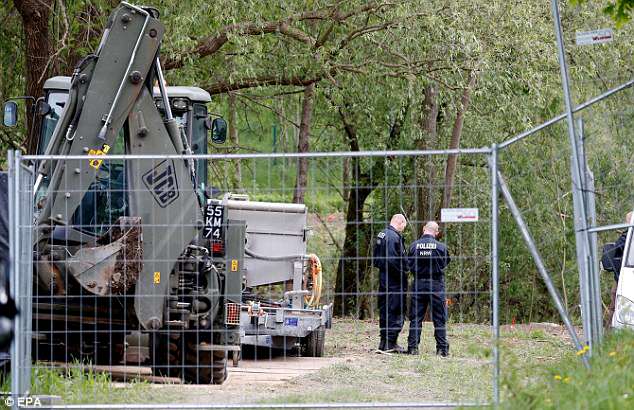 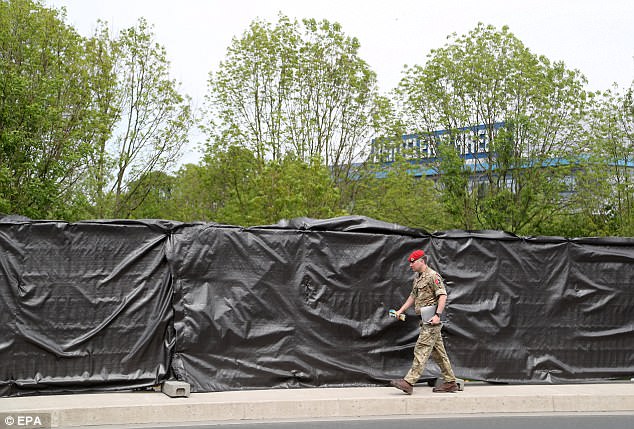 Katrice’s mother Sharon, now 64, said the toddler was ‘gone in a matter of seconds’. She added: ‘It’s living a nightmare that you never wake up from.

‘Nearly 37 years ago we became members of an exclusive club we didn’t ask for membership of — we became parents of a missing daughter.

‘I would dearly love to be able to revoke that membership.’

She said: ‘The next five weeks is a double-edged sword for us as a family. We desperately want Katrice to be found but we also know that if anything is discovered during this search then my daughter’s life would have been ended in very unsavoury circumstances.

‘That’s another emotion we have to learn to live with.’

The case was reopened in 2000 and led to the arrest of a former soldier.

But he was released without charge and the case closed again after three years.

There were further inquiries in 2012 when Royal Military Police chiefs admitted mistakes were made during the initial investigation. 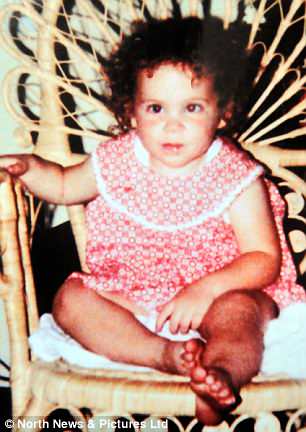 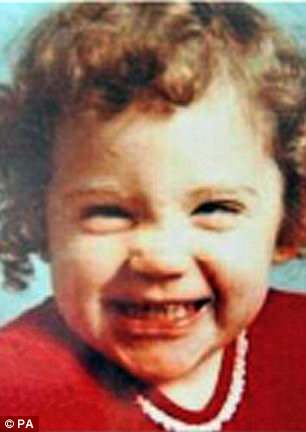 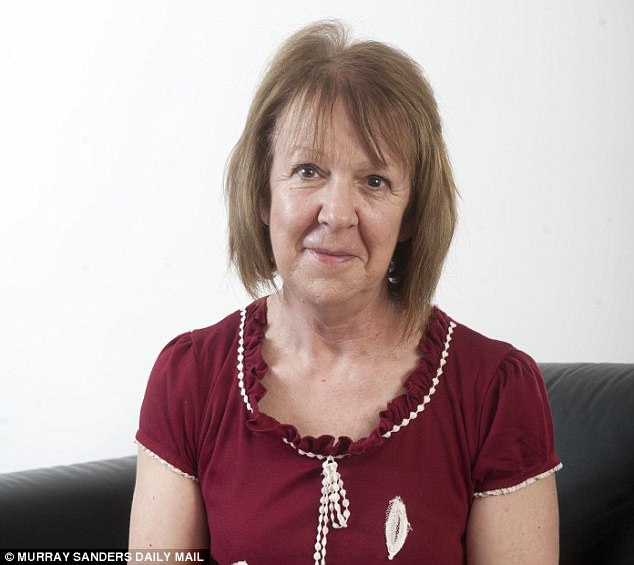 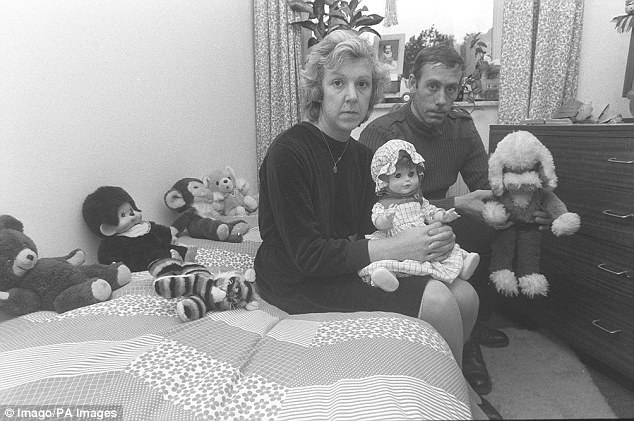 Sharon and Richard Lee, the parents of Katrice, who are desperately hoping the search will find what happened to their daughter 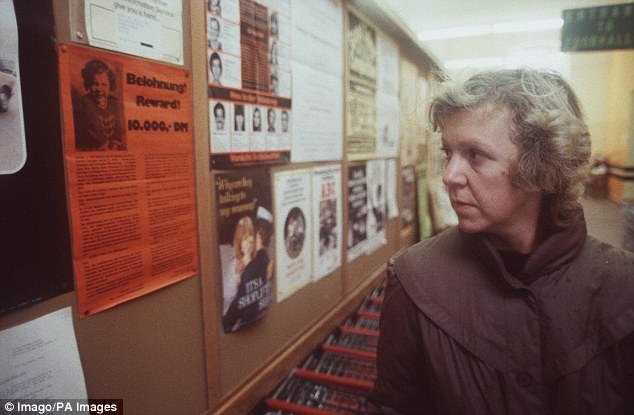 Katrice’s mother Sharon, now 64, said the toddler was ‘gone in a matter of seconds’

The RMP announced on Monday that it would be carrying out a dig on the River Alme’s banksat Paderborner Str, Paderborn.

It followed a reanalysis of evidence gathered during the original investigation, which pinpointed the river as an area of interest, the force said.

The ‘detailed excavation’ of the site is expected to last around five weeks.

Senior investigating officer Richard O’Leary, of the RMP, said: ‘The aim of the search is to find evidence that could finally shed light on what happened to Katrice.’ 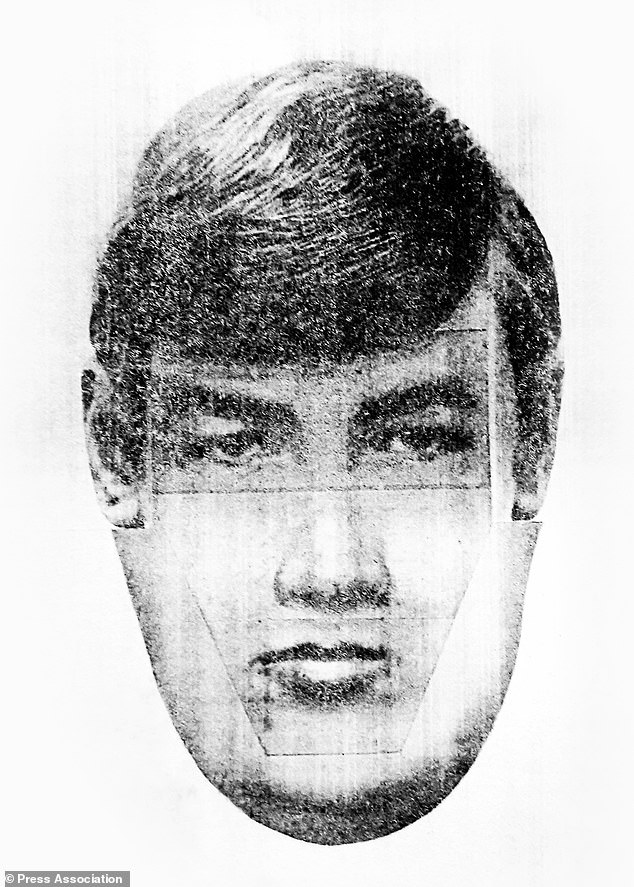 A man was seen climbing into a green saloon with a child matching Katrice’s description (pictured: the photo-fit of the man)

He renewed an appeal for information about a man seen at the shopping centre placing a child matching the toddler’s description into a green saloon car.

‘A green saloon car was also seen on the River Alme Bridge near the NAAFI the day after Katrice disappeared. It may or may not be the same car, but we are very keen to identify this car,’ he added.

A photo-fit of the man has been reissued as part of the fresh appeal.

Anyone from the Paderborn area who owned such a car at the time is asked to approach police so they can be ruled out of the inquiry.

But the possibility remains that Katrice is still alive – now aged 38 – having been abducted and raised with little memory of her early years, investigators believe. 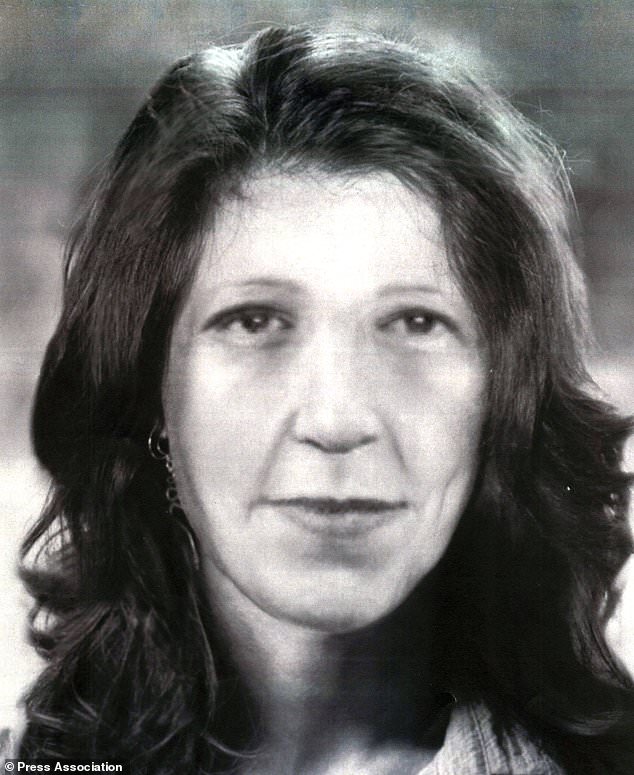 She was born with a distinctive eye condition in her left eye which would have required two medical operations to correct.

Mr O’Leary said: ‘An age progression image of what Katrice may look like now, aged 38, has been produced.

‘If anyone feels they know someone who looks like this, or believes they could be Katrice, then we would encourage them to come forward.’

Katrice’s father Richard, now 68, who has split from Sharon, had criticised the RMP handling of the case, but felt his voice had ‘finally been heard’ at a summit with Defence Secretary Gavin Williamson this year. 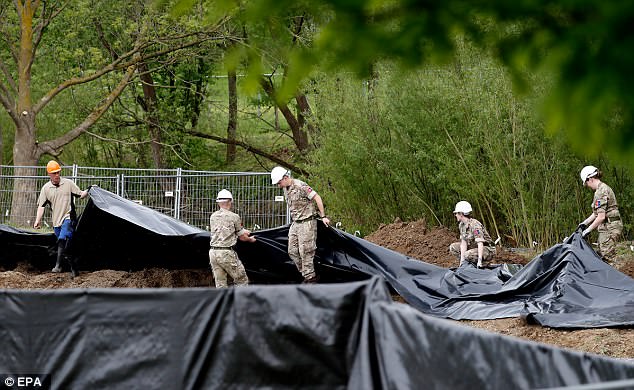 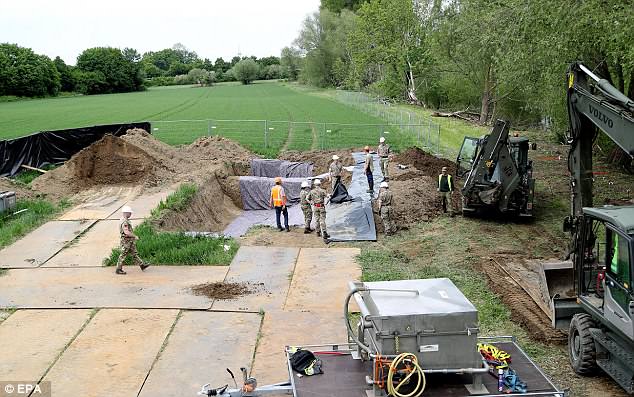 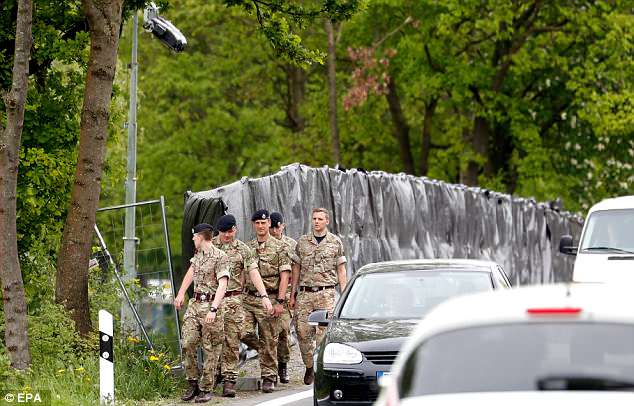 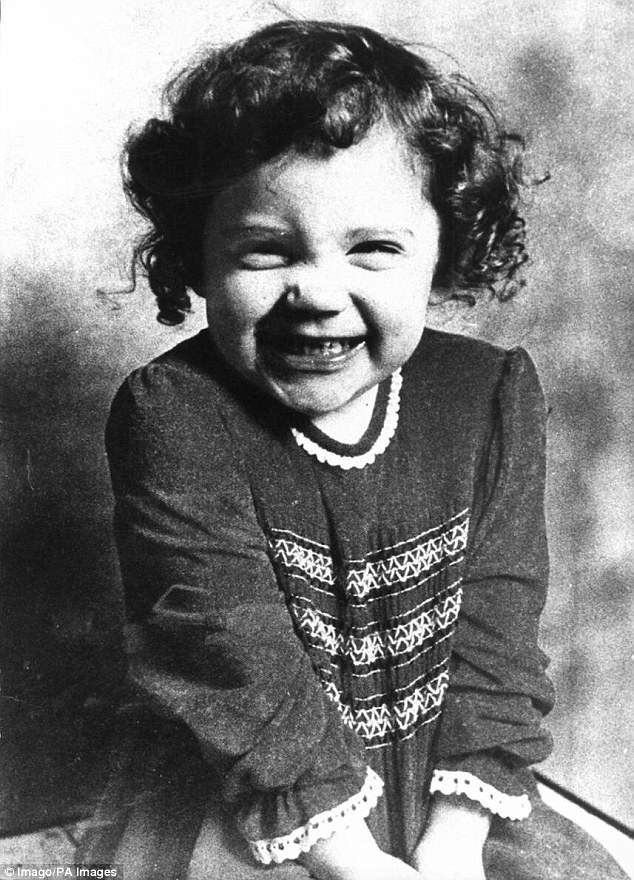 Katrice Lee vanished on 28 November 1981, her second birthday, as her mother was buying treats for a birthday tea

Mr Williamson said Katrice’s case was heart-wrenching, adding: ‘The disappearance of a child is every parent’s worst nightmare and I have been struck by the courage and dignity of the Lee family who have never given up on their search for Katrice.

‘As this major dig gets under way, the efforts and expertise of the Royal Military Police are behind the family.’