‘My son, my life, my angel’: Father’s emotional tribute to goalkeeper son, 14, who died after horror on-field collision

A father has paid tribute to his 14-year-old footballer son who died after colliding with another in a ‘freak accident’ during a youth cup match.

Goalkeeper Luca Campanaro, who played for Bedgrove Dynamos FC, was seriously injured in an under-15s away match against Harefield United FC, in west London on Sunday.

The collision occurred after Luca rushed out of his goal to stop an oncoming forward during an away match in Hillingdon, west London.

Luca, who was 6ft tall, suffered a fatal brain injury and died in hospital on Monday. 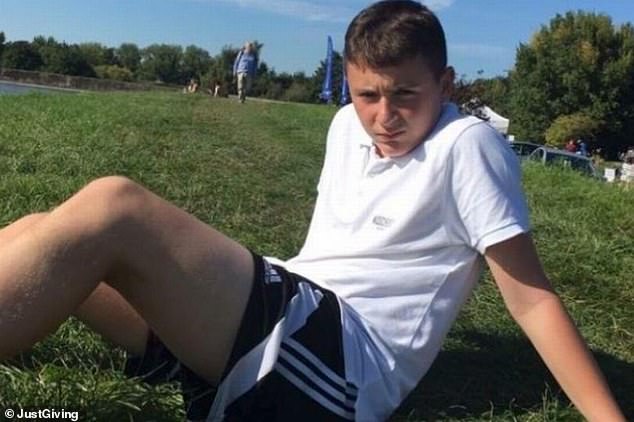 Luca Campanaro, pictured, who captained Bedgrove Dynamos U13’s, was injured during a youth cup match in Aylesbury, Buckinghamshire, on Sunday 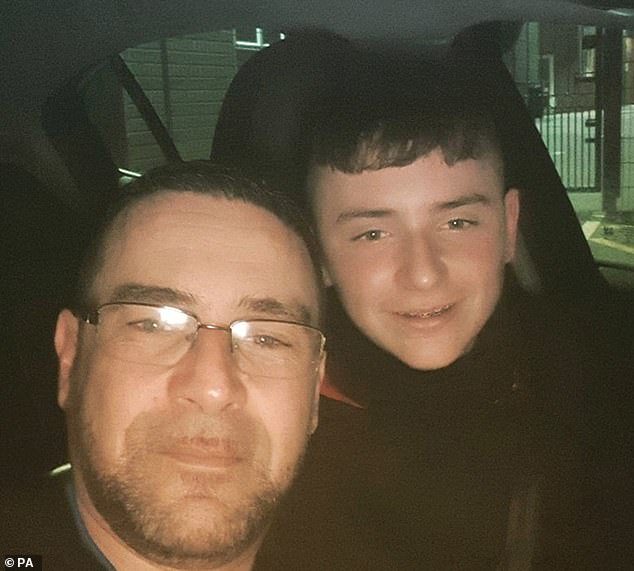 The collision with an opposition striker occurred after Luca rushed out of his goal to stop an oncoming forward during an away match in Hillingdon, west London.  Luca is pictured with his father Americo

‘My boy is with the angels now, smile and remember him everyone, don’t be sad, celebrate his life, stay as strong as my boy was.

He told The Sun that Luca, who is from Aylesbury, Buckinghamshire, was  ‘a big lad, a big unit’ which is why he was a ‘goalkeeper, with a big heart to match’.

Luca’s grandad former RAF nurse Gerard Conroy rushed onto the pitch to go to his aid after the collision.

Gerard, 70, said: ‘The forward came down the right wing and the defenders were moving back. Luca had this habit of running out to kick the ball. He always advanced.

‘He had done it earlier in the match and put the opposing forward off. He ran out to the edge of his box. He could not dive for the ball because he was never going to get it.

‘Because it was raining the day before he almost slid alone and put his foot there. The forward saw him coming and tried to jump over him.

‘Luca was slightly up and keeping his eye on the forward. As the guy tried to jump I don’t know which part of his body hit Luca. It was a genuine accident. Luca was brave, but too fearless.’

Luca’s mum Joanne, 40, who has MS, was at the match at witnesses the collision.

Luca, who has a younger brother Santino, 12, had been with the Dynamos from the age of 6 or 7.

Gerard said Luca’s team was losing three nil and it was half way through the second half when he was injured, being determined not to let another goal in.

He went on: ‘For a family trauma it was a complete nightmare. I said to my daughter to go away. This is the last thing you want to see as a mother. It is bad enough seeing it as a grandfather. She went to the other side of the field.’

‘I am an ex-RAF nurse and attended him until the paramedics got there.’

Gerard’s wife and Luca’s Nan, Margaret,69, said: ‘It was a freak accident. You have got to feel for that young lad from the other team.’

She said Luca’s parents, who are divorced, are at the Royal London Hospital with him while his organs are harvested.

Margaret said: ‘He had a rare blood group. They have 5 donors to receive his organs and now they are looking for another two.’

The family were looking forward to Christmas. His grandparents had bought Luca, who was a Spurs supporter, an Alexa and some expensive aftershave.

A JustGiving page set up by Dave Garricks a family friend to raise cash for Luca’s family has smashed its £10,000 target – with the total standing at £16,000 and rising.

The organs of the teenager  were donated after he died on Monday afternoon ‘so in this tragic event others may live’, according to the JustGiving site.

Ambulance crews arrived ‘instantaneously’, according to Ray Green, secretary for Harefield United FC, and Luca was airlifted to the Royal London Hospital.

Mr Green said: ‘Hats off to the paramedics and ambulance service, they were there that quick, even before the air ambulance.

‘Normally when you have a football injury you can be sitting around for an hour, but it was instantaneous.’

Mr Green added: ‘It was just a freak accident.

‘It was just a collision between the two boys.

‘From what people were saying, it was the awkwardness of how he fell that was it.’ 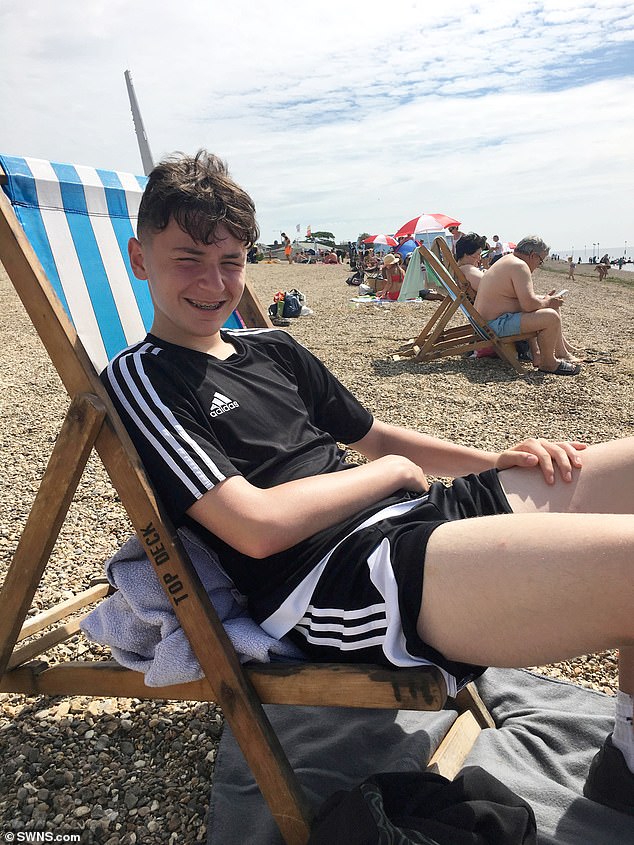 Luca, who was 6ft tall, suffered a fatal brain injury and died in hospital on Monday.

A statement from Bedgrove Dynamos FC said: ‘Our thoughts are with Luca’s family and loved ones at this distressing time.

‘We also offer our heartfelt condolences to his team-mates and all associated with the club as we now try to come to terms with the tragic loss of our friend and team-mate.

‘It goes without saying that everyone at the club is devastated by this news and we ask that the privacy of his family, the players and club members is respected at this incredibly difficult time.’

A statement on the JustGiving page said any further donations would go to London’s Air Ambulance.

Luca attended The Mandeville School in Aylesbury, where he was sitting his GCSEs in English, maths, science, history, computer science, physical education and a Btec in health and social care.

In a statement released by the school, headteacher Andria Hanham said: ‘There are no words to describe how we feel in losing Luca from our school community.

‘He was an extremely popular boy and well liked by his peers and staff.

‘Moreover, he was known in the local community and had innumerable friendships, so this news will shake many, many people.’

In a joint statement by the staff they described Luca as ‘an energetic, lively, inquisitive, friendly and helpful young man’.

It added: ‘He always had a smile on his face and he was a popular member of The Mandeville School.

‘He will be hugely missed.’

‘After treatment on scene the patient was transferred to a major trauma centre by air by the London’s Air Ambulance team.’

The Bucks Herald reported that Andria Hanham, who taught Luca, said telling pupils of the tragedy was one of the hardest things she had ever had to do.

She said: ‘There are no words to describe how we feel in losing Luca from our school community.

‘He was an extremely popular boy and well-liked by his peers and staff. Moreover, he was known in the local community and had innumerable friendships so this news will shake many, many people.’