FBI Director Chris Wray hints he has considered RESIGNING over the past year and fires back at President Trump’s remarks to Putin, calling Russia’s continued attempts at interference ‘malign’

FBI Director Christopher Wray has hinted that he contemplated resigning over disagreements with President Donald Trump and his administration.

Speaking at a security conference in Aspen, Wray publicly repeated his view that Russia interfered in the 2016 presidential election – a view not shared by his boss, the president.

‘My view has not changed, which is that Russia attempted to interfere with the last election and that it continues to engage in malign influence operations to this day,’ Wray said.

He made the remarks during an interview with Lester Holt of NBC News.

Holt asked Wray about reports from early this year that he threatened to resign after Attorney General Jeff Sessions pressured him to fire FBI Deputy Director Andrew McCabe. 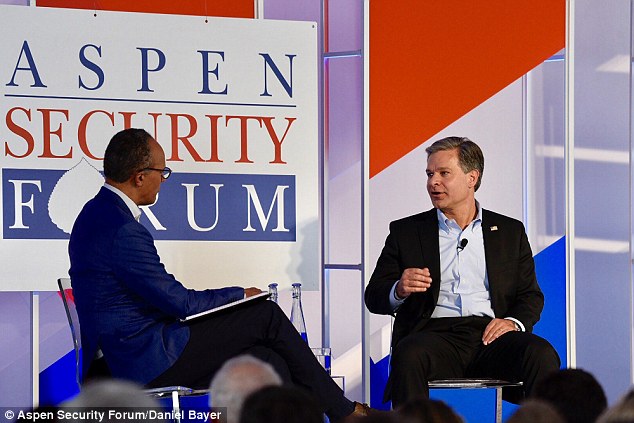 Speaking at a security conference in Aspen, FBI Director Christopher Wray (seen right with NBC News anchor Lester Holt) publicly repeated his view that Russia interfered in the 2016 presidential election – a view not shared by his boss, the president

Trump had posted critical tweets of McCabe, particularly over his alleged anti-Trump bias and his handling of the Hillary Clinton email investigation.

McCabe was eventually fired by Sessions this past Spring, though Wray did not resign.

Wray took over as head of the FBI after Trump fired his predecessor, James Comey.

The FBI and the Justice Department have come under intense pressure from the Republican-led Congress to reveal information about the ongoing investigations headed up by Special Counsel Robert Mueller.

Wray and Deputy Attorney General Rod Rosenstein have resisted, saying that revealing details about an active investigation could compromise methods and sourcing.

Republicans say that the FBI and DOJ are stonewalling while avoiding Congressional oversight.

Democrats accuse Republicans of waging a politically motivated effort to discredit law enforcement and to undermine the Mueller investigation.

Holt asked Wray if he ever threatened to resign in the face of the pressure campaign by the GOP.

‘I’m a low-key, understated guy, but that should not be mistaken for what my spine is made out of. I’ll just leave it at that,’ Wray said.

Wray said Wednesday that Russia continues to use fake news, propaganda and covert operations to ‘spin up’ Americans on both sides of hot-button issues to sow discord in the United States.

Wray stood behind the intelligence agencies’ assessment that Moscow meddled in the 2016 presidential election, dismissing Russian President Vladimir Putin’s claim that his country was not involved. 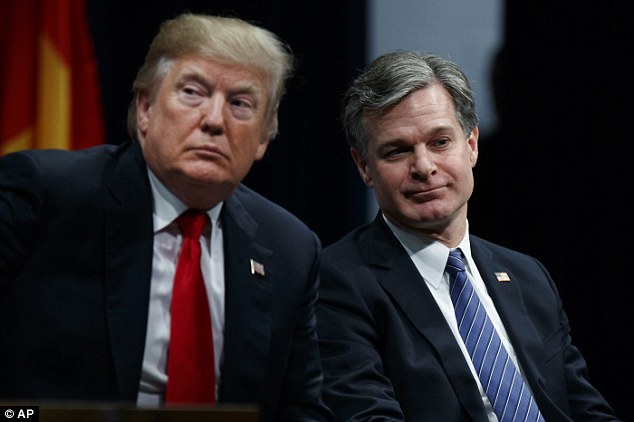 ‘He’s got his view. I can tell you what my view is,’ Wray said at the opening event of the Aspen Security Forum in Colorado.

Wray spoke after a day of controversy in Washington over whether Trump accepts the intelligence agencies’ assessment and whether he believes Moscow is continuing to try to influence American elections or threaten the nation’s infrastructure.

Wray also dismissed Putin’s offer to allow the U.S. access to 12 Russian military intelligence officers who have been indicted on charges of interfering in the election in return for being able to interview Americans the Kremlin has accused of unspecified crimes.

The White House said it was under consideration. Wray dismissed the offer.

‘I never want to say never about anything,’ Wray said, ‘but it’s certainly not high on our list of investigative techniques.’

Much of the conversation with Wray focused on Russia.

‘Russia continues to engage in malign influence operations to this day,’ Wray said.

He said that while U.S. officials have not yet seen an effort by Russia to target specific election systems, it is aggressively engaged in influence operations to sow discord and divisiveness in America.

‘To me, it’s a threat that we need to take very serious and respond to with fierce determination,’ Wray said. 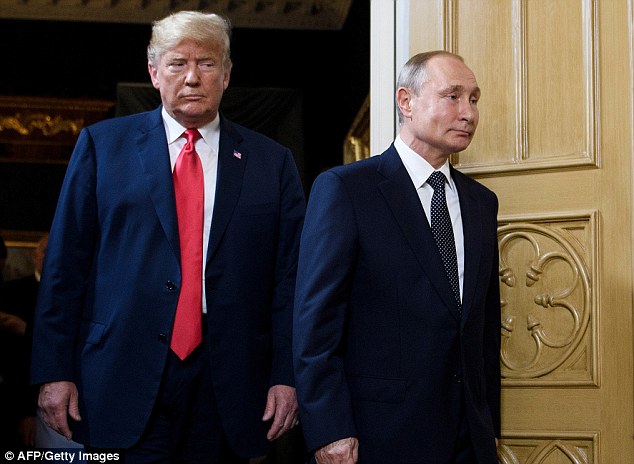 Wray stood behind the intelligence agencies’ assessment that Moscow meddled in the 2016 presidential election, dismissing Russian President Vladimir Putin’s claim that his country was not involved. Putin is seen right with Trump in Helsinki on Monday

He said the Russians identify divisive issues, and through covert and overt operations, fake news and propaganda, they ‘spin people up on both sides of an issue and then kind of watch us go after each other.’

Russia isn’t the only country threatening the U.S., Wray said.

He said he thinks China, from a counterintelligence perspective, represents the broadest and most significant threat America faces.

China wants to replace the United States as the most powerful economic engine in the world and is infiltrating American businesses to get an edge.

‘We have economic espionage investigations in all 50 states’ that can be traced back to China, Wray said.

‘It covers everything from corn seeds in Iowa to wind turbines in Massachusetts and everything in between.

‘The volume of it. The pervasiveness of it. The significance of it is something that I think this country cannot underestimate.’