The Home Secretary is understood to think that ‘cultural sensitivities’ prevented the police from tackling Leicester’s ‘slave’ sweatshops.

Priti Patel is said to have raised concerns behind closed doors that government agencies turned a blind eye to the factories where staff were paid less than the minimum wage and worked in poor conditions, as reported by The Sunday Times.

Ms Patel is thought to now be considering new laws on modern slavery after fears the current legislation is no ‘fit for purpose’.

A source close to the Home Secretary told the newspaper: ‘This scandal has been hiding in plain sight and there are concerns cultural sensitivities could be in part to blame for why these appalling working practices haven’t been investigated.’

The investigation last week revealed that clothes workers in Leicester are being paid as little as £3.50 an hour to produce items for some of the UK’s biggest fashion brands. 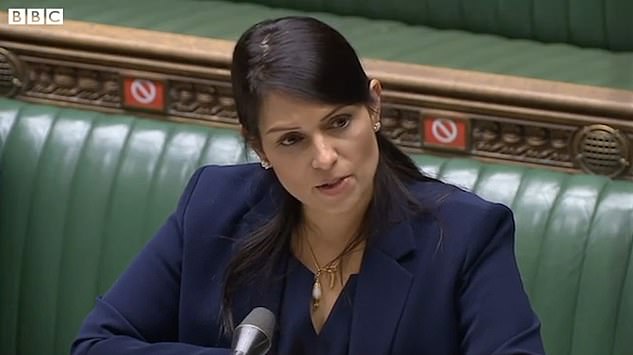 At one factory, where clothes at bound for online giant Boohoo and Nasty Gal, employees are said to work for less than half the national minimum wage.

The undercover report by The Sunday Times also found that no additional hygiene or social distancing measures were in place, despite the city being in a localised lockdown due to an outbreak of the virus.

He is also approached by the factory foreman, who warns: ‘These motherf***ers know how to exploit people like us. They make profits like hell and pay us in peanuts.’

‘Take me for instance, I’ve been working for so many years in this industry, I’ve been here for five years but never could I take a proper pay packet. I’m still only on just over £5 an hour.’ 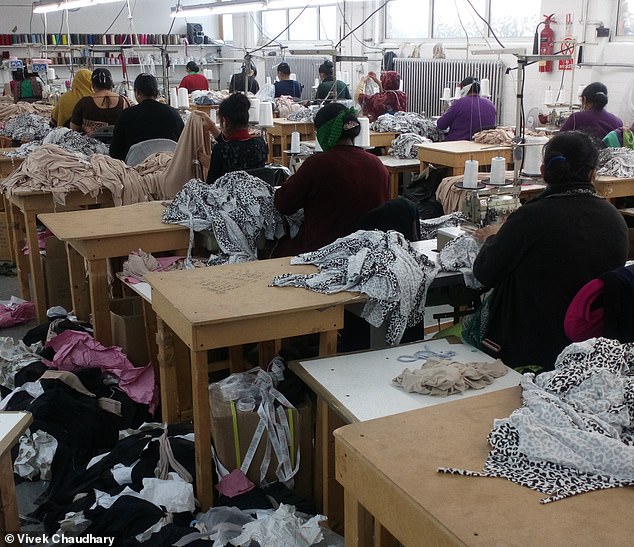 Workshops in Leicester are used to produce incredibly cheap clothes for online retailers. Pictured: Workers at the Faiza Fashion factory in Leicester working despite the Leicester lockdown 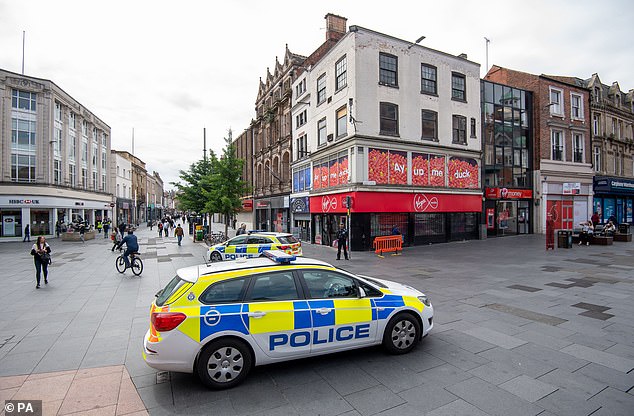 Following the report a number of textile factories in the area were visited by seven different agencies, including Leicestershire Police, Leicestershire city council and Immigration enforcement.

The city is currently in local lockdown due to a spike in coronavirus cases.

Tory MP Andrew Bridgen told The Sun he reckons there could be 10,000 ‘slaves’ working in Leicester.

He said: ‘Covid-19 has brought into focus what’s been going on.

‘It’ll take a Tory government to end the despicable work practices and human exploitation in Leicester.’

One business owner running a shop in the North Evington area of Leicester has called for police to intervene in the situation.

He told The Sun: ‘It’s crazy what is happening in these factories. These men and women are decent, hard-working people but they are risking their lives to produce clothes for big fashion brands right here in the UK. 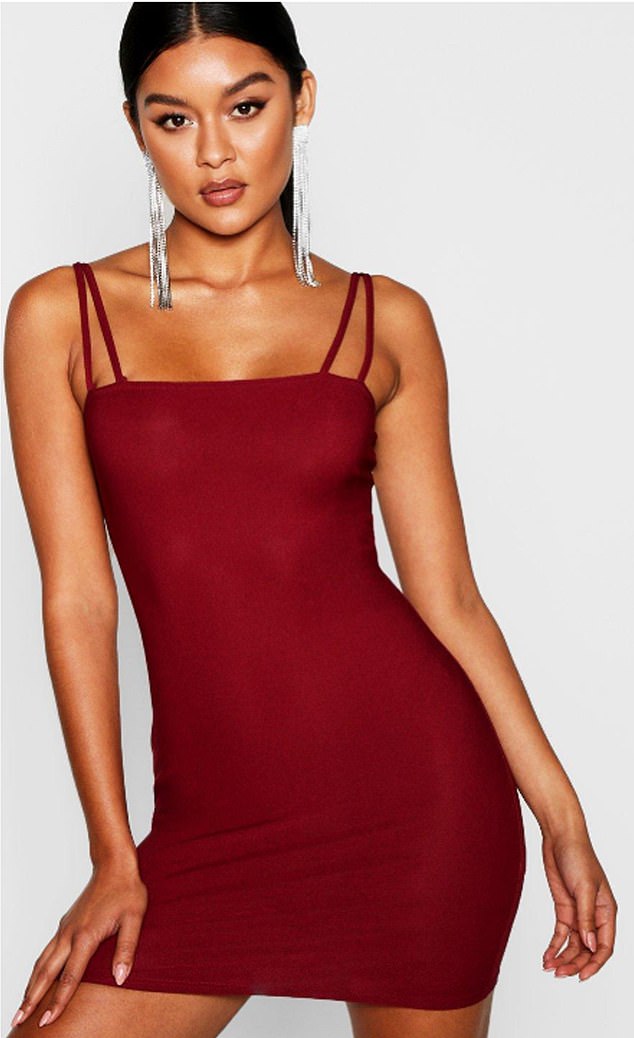 Some factories in Leicester pay staff as little as £4 an hour in order to turn a profit on cheap clothing supplied to online retailers including Boohoo. Pictured: A £5 party dress sold by Boohoo, advertised as ‘perfect for transitioning from day to play’

‘It’s is wrong but no one is doing anything to put a stop to it. The police should go into the factories and close them down.

‘What they are doing is slave labour, there is no other word for it.

‘They are only getting £2.50 an hour and they make so little money they have to live with 10 others in two or three-bedroom houses.’

A female machinist at a factory, Faiza Fashion, spoke to the Mail last week and gave a chilling picture of life at these establishments.

The mother of three in her 50s, who we have decided not to name, said: ‘Three weeks ago, I wasn’t feeling well and there were others who also had flu-like symptoms. But what can you do? We are not rich people and need money to survive.’

She also said they are not provided with face masks or gloves from the factory.

It comes as bosses at under-fire fashion company Boohoo last week appointed a top lawyer to look into allegations that factories involved in the making of its clothes were paying below minimum wage and breaching safety rules. 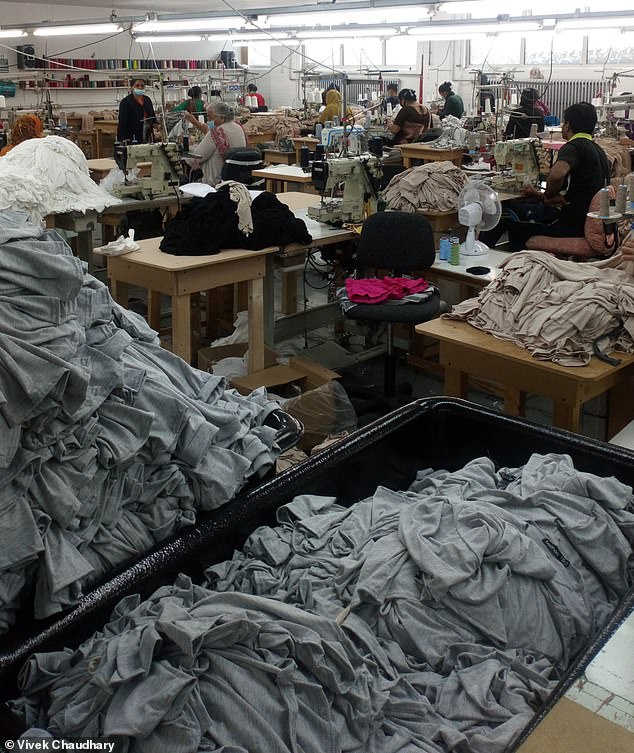 A female machinist at another factory, Faiza Fashion, spoke to the Mail this week and gave a chilling picture of life at these establishments

The fashion chiefs said that Alison Levitt, a QC, would be reviewing its supply chain in a bid to find out whether factories were meeting minimum wage and Covid-19 rules.

The board said it was ‘shocked and appalled’ by the allegations, which were aired in the Sunday Times last weekend.

While there he saw Boohoo and Nasty Gal branded clothes in boxes. Nasty Gal is owned by Boohoo.

It is not the first time serious questions have been raised about the Leicester garment industry where Boohoo is a major customer.

Before the Sunday Times report, Channel 4, the Financial Times, the BBC and the Guardian had all highlighted the issue, as early as 2017.

Boohoo said it had found ‘some inaccuracies’ with the report last Sunday.

It said that the clothes had been made in Morocco and were just being repackaged in Leicester at a premises formerly operated by Jaswal Fashions.

However Jaswal has never been a supplier to the company, Boohoo said. The order was instead placed with Revolution Clothing, which outsourced the order to Morefray Limited.

Morefray made the clothes in Morocco and repackaged them in Leicester.

‘Our investigation to date has not found evidence of suppliers paying workers £3.50 per hour,’ Boohoo said.

However it had found other areas where the suppliers did not comply with Boohoo’s code of conduct, so cut them both off.

In 2018 the Financial Times reported that employers were getting around minimum wage rules by not paying workers for all the hours they put in.

Ms Levitt will now review how compliant suppliers are with minimum wage and Covid standards. She will also look into working hours and record keeping, as well as staff’s contracts.

In September, Boohoo will publish an update on her review alongside its half-year results, with a second update due in January next year.

When asked if the company would commit to publishing the full findings of Ms Levitt’s review, the company said that it would be her decision, but added that Boohoo would welcome transparency.

Boohoo has also said that experts from Verisio and Bureau Veritas will audit its supply chain, and carry out other work that the QC gives them.

Chief executive John Lyttle said: ‘As a board we are deeply shocked by the recent allegations about the Leicester garment industry.

‘We wish to reiterate how seriously we are taking these matters and we will not hesitate to terminate any relationships where non-compliance with our Code of Conduct is found.’

Boohoo’s share price was sent into a tailspin this week despite a statement from the company on Monday trying to fight the fire.

By Tuesday the company’s shares were down by a third compared to where they had been on Friday.

It is bad news for the company’s top bosses, who are set to share a £150 million bonus package if they can add two thirds to the company’s share price in the next two years.

Analysts at Liberum, who had been sceptical over the company’s original response on Monday, said: ‘All these steps we commend and should start to help re-build confidence that Boohoo intends to do the right things.

‘They fully acknowledge that further investigations will be ongoing and have committed to their full co-operation with the Home Secretary and local authorities.

‘While serious questions will remain for some time, today is the first positive step forward in transparency.’