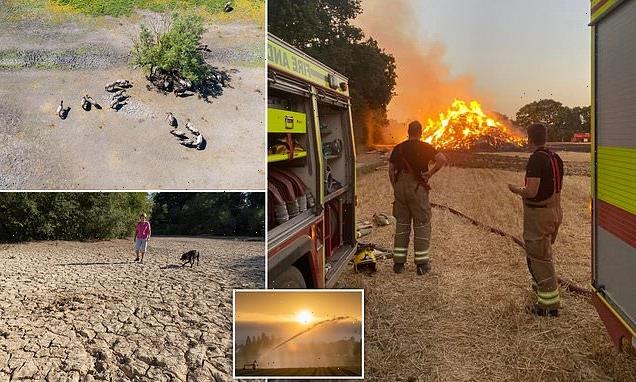 Fears drought will spark food shortages and make beer and meat more expensive: Warning ‘writing is on the wall’ for crops of potatoes, apples and hops – while low hay supply will hit animal feed

This summer’s drought could mean the ‘writing is on the wall’ for key British crops like potatoes, onions, carrots, lettuce, sprouts, apples and broccoli, farmers warned today – risking a looming vegetable shortage in supermarkets.

Livestock farmers also fear the lack of new grass means there will not be enough hay to feed cows, sheep and other livestock this winter, forcing them to rely on more expensive feeds.

This could work its way through to the shops, with meat, milk, cheese and other produce costing more by the New Year – if not sooner.

Another crop under threat are hops, according to the British Growers Association, with smaller yields risking price increases that could eventually push up the price of a pint. 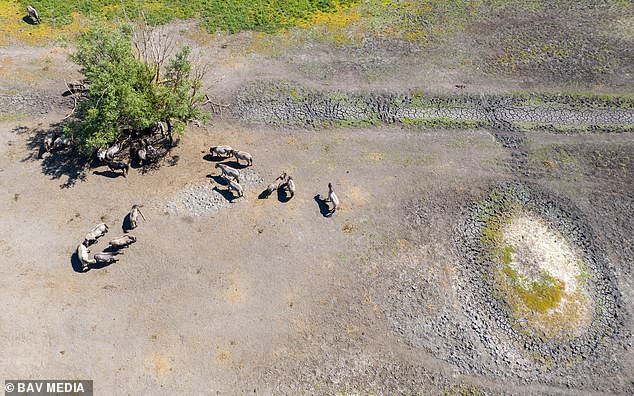 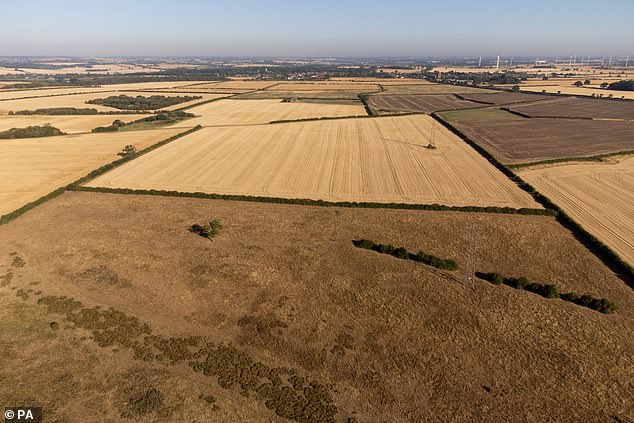 Parched fields and meadows in Finedon, Northamptonshire. A drought is set to be declared for some parts of England today

National Farmers’ Union deputy president Tom Bradshaw told The Grocer that water was now a ‘critical issue’ for the sector and for some crops ‘the writing is on the wall’.

He said: ‘I can’t see how potato yields are going to be anything but well below average. Onion yields the same. Carrots and lettuce are in the same boat as the hot weather has had really severe impacts on them.’

He said crops already in the ground are ‘running short of water’ because the rights of farmers to take water from rivers and bore holes have been curtailed.

He warned that not enough crops were being planted to keep the UK supplied with vegetables in the winter, which could mean higher prices.

Hopes of filling the gap with imports may not materialise as dry and hot weather has hit most of Continental Europe.

Following a drought in 2017, the British Beer & Pub Association said a shortage of barley and hops risked the price of a pint of ale increasing by 2p. Today, a spokesman said none of its members had reported a lack of hops as an ‘immediate issue’, but they were ‘keeping an eye on it’.

Livestock such as beef herds and dairy cows depend on forage when the grass in fields stop growing as winter approaches.

In severe weather, farmers have to take bales of summer-harvested hay out of barns and into snow-covered fields to scatter so their animals don’t starve.

Phil Stocker, chief executive of the National Sheep Association, said ‘Some sheep farmers are already feeding winter forage stocks out on fields. There could be some serious forage shortages if we’re not careful this year.’ 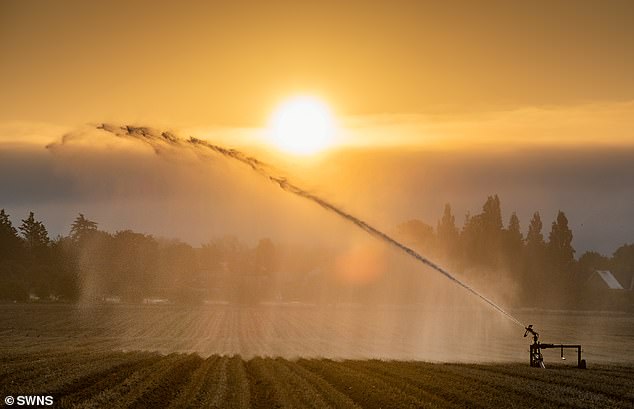 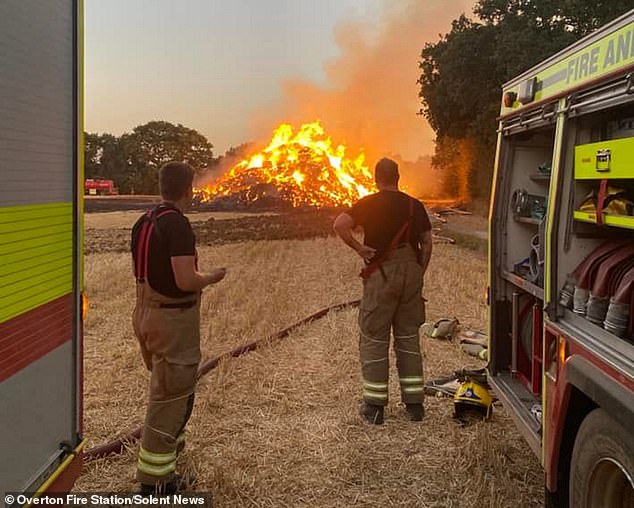 Dozens of firefighters tackled a huge blaze as 800 tonnes of straw ignited earlier this month in Overton, Hampshire

Lambs were starting to lose condition, and he said farmers had tough choices to make, but so far lamb prices were still holding steady.

The extremely dry summer of 1975 saw sheep, pigs and calves die in the high temperatures, while milk yields fell and lambs and cattle took longer to fatten, according to a Royal Society paper.

Currently there is a huge variation across the UK, with southern and south-west and the east of England regions the most severely affected.

By contrast, forage stocks in traditionally wetter regions including south-west Scotland and Cumbria are at normal or very good levels.

Mr Oakes, a tenant dairy farmer based just outside Birmingham, warned ‘We’re eating into our first-cut silage quite quickly. There will not be a lot left going into the winter.’

Other crops are also suffering – he said his maize was ‘shrivelled and spiky’, resembling pineapple plants. 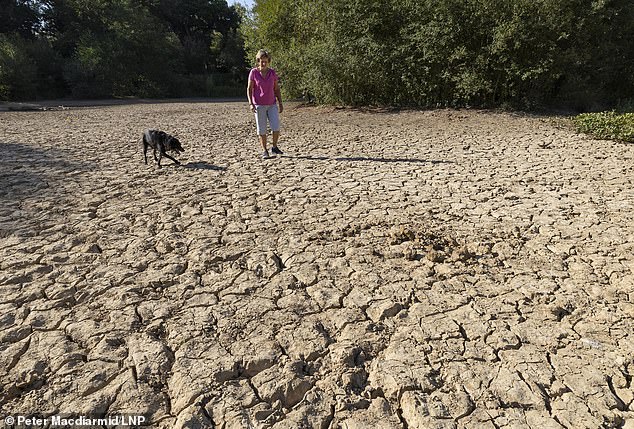 Paul Macer, a dairy specialist partner at Kite Consulting, said dairy farmers in affected areas might have to feed extra concentrates, which is specially-purchased and costly ‘dry’ foodstuff, through the winter to compensate for lack of their own, free, farm-grown forage.

‘Concentrates will be twice the cost of forage. It will probably add about 1p to 2p per litre to milk production costs on those farms’ he forecast.

Cornwall NFU chairman Rob Halliday, who farms 370 head of cattle and 150 ewes across two farms near Liskeard, fears he ‘faces the longest winter ever’.

He told Farmers’ Weekly ‘I hope we’ve made enough early-season silage to cover the prolonged feeding period, but I’m concerned about not being able to establish green crops for winter grazing.’

Farmers often plant selected green crops which can withstand cold temperatures, to provide their livestock with something to graze in the chillier months.

Earlier this week, Mr Halliday moved 80 younger livestock out of the parched fields and into barns and fed them with supplements after their growth rates dropped significantly.

His lambs have also been weaned off their mothers early to help the ewes remain strong for the hard winter months ahead.

Drought is set to be declared TODAY: Millions more are hit by hosepipe bans as country faces tougher restrictions on water and canals being forced to close

Large parts of England are set to be officially declared in a state of drought today – forcing water companies to bring in even tougher restrictions on water use and threatening the closure of canals.

The hardest-hit areas in the South and East of the country are expected to be officially classified as drought-stricken. The move will put pressure on water companies to do more to conserve supplies.

Temperatures are expected to hit 95F (35C) today – making the country hotter than parts of the Caribbean and threatening crops like potatoes, apples, hops, broccoli and sprouts. 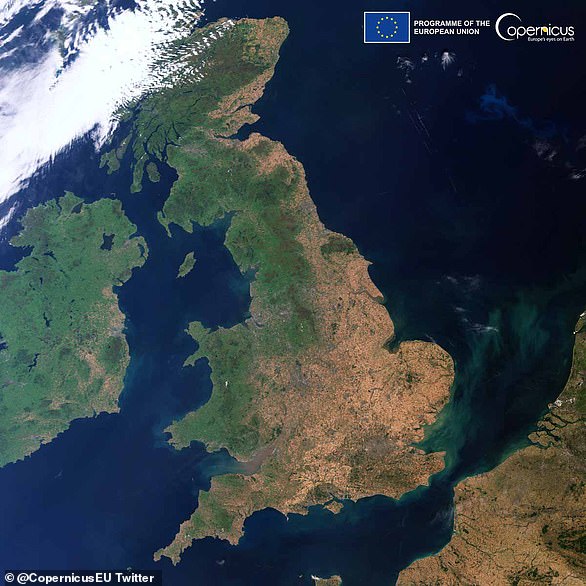 Today, Yorkshire Water became the fifth company in England and Wales to announce a hosepipe ban for its five million customers.

Southern Water, South East Water, Welsh Water and Thames Water have all announced hosepipe bans either now or in the coming weeks. South West Water and Severn Trent have all indicated they will also bring in restrictions.

Together, they would cover more than 32 million people.

Yorkshire Water will bring in a hosepipe ban from August 26, with its director of water, Neil Dewis, saying parts of the county had seen the lowest rainfall since records began more than 130 years ago.

Under the restrictions, customers are banned from using a hosepipe to water their gardens, clean their vehicles, fill their swimming pools or clean their homes. 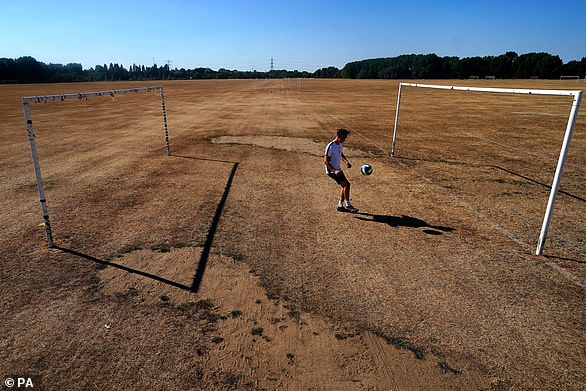 A general view of dry grass on the football pitches at Hackney Marshes. The Met Office has issued an amber extreme heat warning which came into force on Thursday and covers the rest of this week

However, they are still permitted to complete those activities with tap water from a bucket or watering can, or using water that is not sourced from taps.

Businesses will only be allowed to use a hosepipe if it is directly related to a commercial purpose.

An official drought is set to be announced today after a 10.30am meeting of the National Drought Group, which brings together the Environment Agency, water companies and groups such as the National Farmers’ Union and the Angling Trust.

Insiders last night said they expect the drought declaration to be a ‘formality’ for areas of southern England.

It would be the first drought declared in the UK since 2018 – although that one was rapidly brought to an end by heavy rain.