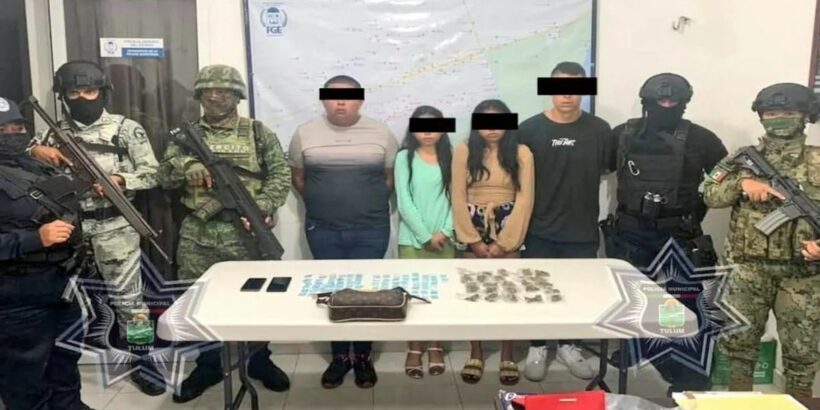 Police have arrested a leader of El Chapo's old cartel as well as his network of accomplices, including two female narcos, following a drug's bust in a tourist hot spot.

The operation led to the arrest of Dani, the lead operator for the Sinaloa Cartel in Tulum, a holiday destination in the Caribbean. In other cartel news, traffickers in Mexico have been given a chilling warning by a gang that is looking to wipe out all its rivals – and they say the 'purge has already begun'.

Operativa Bélica – which translates literally as “War Operations” but who is also known as the “Bloodthirsty Operatives” – have hung the message from the bridge in San Luis Potosí City.

The warning was aimed at all “independent traffickers” as well the Alemanes Cartel and its leaders Alfredo Alemán and Luis Alemán.

Operativa Bélica is believed to be the armed wing of the Jalisco New Generation Cartel (CJNG) of drug traffickers.

According to the Borderland Beat blog, the message on the bridge translates as: “This message goes out to all the independent traffickers in the capital, along with the distributors of drugs who sell for Alfredo Alemán.

“Just so that you’re all aware, the purge has begun in the Progresso neighbourhood, and its surroundings. For all those who choose not to fall into formation with us, your fate will be the same as with this dumb ass.

“Luis Alemán, where’s all that bravery of yours? We’ve already seen that you don’t have anything under control here. And that you f****** h**** don’t even take care of your personnel. Therefore, brace yourselves because we’re coming after everyone left over.

“We already have everyone located. With an advance warning there is no betrayal. We’re coming for this plaza. Sincerely, The OB.”