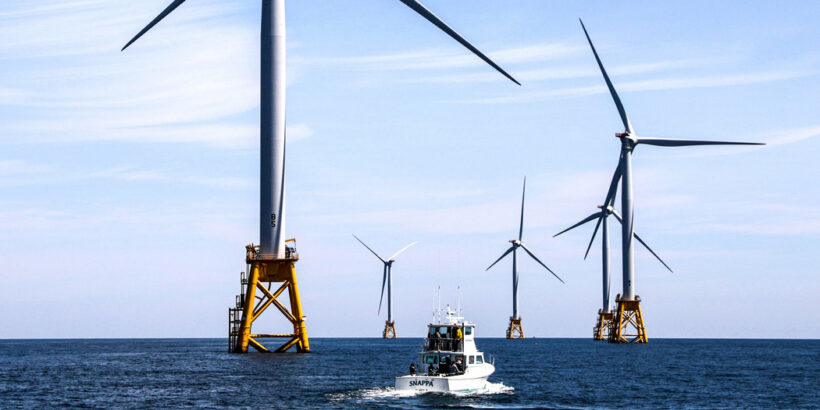 The Biden administration on Tuesday will announce its final approval of the nation’s first commercial-scale offshore wind farm, a major step toward President Biden’s goal of expanding renewable energy production across the United States, according to two people familiar with the matter.

The Vineyard Wind project calls for up to 84 turbines to be installed in the Atlantic Ocean about 12 nautical miles off the coast of Martha’s Vineyard, Mass. Together, they could generate about 800 megawatts of electricity, enough to power about 400,000 homes.

The $2.8 billion project is a joint venture of the energy firms Avangrid Renewables and Copenhagen Infrastructure Partners.

The idea of a wind farm off the Massachusetts coast was conceived two decades ago but ran into repeated setbacks, delays and well-funded opposition from waterfront property owners before the Trump administration moved to cancel the project’s permitting process.

The Biden administration jump-started progress on Vineyard Wind in March as part of its larger push to tackle climate change.

The administration has pledged to build 30,000 megawatts of offshore wind in the United States by 2030. It’s a target the White House contended would spark $12 billion in capital investments annually, supporting 77,000 direct and indirect jobs by the end of the decade.

“It’s a big deal on its face. It’s the first of its kind,” said Frank Callahan, president the Massachusetts Building Trades Council. He praised the administration and said, “I think it’s an important message that these jobs will be good union jobs with good wages and benefits.”

The Biden administration said that it intended to fast-track permits for projects off the Atlantic Coast and that it would offer $3 billion in federal loan guarantees for offshore wind projects and invest in upgrades to ports across the United States to support wind turbine construction.

Vineyard Wind is broadly viewed as a test of the Biden administration’s ability to speed up permitting offshore wind projects while navigating concerns from some labor groups as well as commercial fishermen and others.

“It’s a big deal, and not just for Vineyard Wind. This is the icebreaker, it’s the first one, it’s charting the course,” Rafael McDonald, an electricity and renewable analyst at IHS Markit, said after the Biden administration released its initial environmental review in March. “There’s all this pent-up demand from state mandates, and Vineyard Wind is the bellwether.”

Electricity generated by the Vineyard Wind turbines will travel via cables buried six feet below the ocean floor to Cape Cod, where they would connect to a substation and feed into the New England grid. Construction would begin later this year; the project’s developers say it could be operational by 2023.

The effort fuses the administration’s goal of cutting planet-warming greenhouse gas emissions with its promise that renewable energy will create new economic opportunities. Mr. Biden has pledged to cut United States emissions roughly in half by 2035. If Mr. Biden’s offshore wind targets are met, it will accomplish a chunk of that goal by avoiding 78 million metric tons of carbon dioxide emissions, the administration said.

Many Republicans are skeptical of Mr. Biden’s job creation claims and say the president’s plans — particularly his suspension of new oil and gas leases on federal lands and waters — are already hurting union workers in fossil fuel industries.

Offshore wind, which is booming in Europe, is a nascent industry in the United States. Only two wind farms currently operate, off the coasts of Virginia and Rhode Island. Together, they produce 42 megawatts of electricity.

But several Atlantic Coast states, including Connecticut, Maryland, Massachusetts, New Jersey, New York and Virginia, have committed to buying more than 25,000 megawatts of offshore wind power by 2035, according to the American Clean Power Association.

Still, some coastal communities have decried wind farms as eyesores, and some environmentalists are concerned about the impact on marine life.

Fishing groups, meanwhile, are concerned that their boats and trawlers will be forced to steer clear of the hulking turbines, the largest of which now have rotor diameters the length of two football fields. That could limit the amount of seafood they can catch, potentially depriving coastal fishing communities of millions of dollars in revenue.