A campaign backed by Olympian Cathy Freeman is resuming its push to add new verses to the national anthem to better recognise Australia’s Indigenous heritage, after a pause induced by the COVID-19 pandemic. 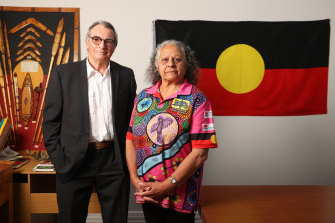 Chairperson Peter Vickery said this change was “a momentous and most welcome first step” in changing the exclusion of Indigenous people from the anthem but the Recognition in Anthem campaign still had unfinished business.

Mr Vickery, a former Victorian Supreme Court judge, started thinking about the inequity of the national anthem when Yorta Yorta soprano Deborah Cheetham refused to sing it at the 2015 AFL Grand Final.

A part-time poet, Mr Vickery started writing new lyrics and formed the Recognition in Anthem project with Aunty Sue Bulger, a Wiradjuri elder and the chief executive of the Brungle-Tumut Local Aboriginal Land Council. The late former prime minister Bob Hawke was patron of Recognition in Anthem and Olympian Cathy Freeman has publicly declared her support.

The revised verse, which contains lyrics such as “For 60,000 years or more, First Peoples of our land” and “From red-rock heart to sun-filled shore”, has been performed several times, including at the Desert Song Festival in Central Australia in 2019, and the Utzon Room at the Sydney Opera House during National Reconciliation Week in May 2021.

Ms Bulger said she was greatly moved by the Opera House performance, featuring Stefanie Jones and the Yulugi Ensemble, with Keyna Wilkins on piano and Gumaroy Newman on didgeridoo.

Ms Bulger said the project was largely on hold during the COVID-19 pandemic but she hoped it would gain momentum now people could meet face to face.

“[The change last year] was a very small first step for us,” she said. “[The new verses] would mean that we could truly celebrate our anthem because it would include us, the First Nations people, and the special places that are around Australia.”

Ms Bulger applauded the trend to have the national anthem sung in Indigenous languages in schools and at sporting events. She also supported the campaign to change the date of Australia Day, which she said would be better called “NSW Day”, though she said she usually attended and did the Welcome to Country at her local celebration.

Mr Vickery said the national anthem had already changed several times. Advance Australia Fair was written in 1878 but the actual anthem was God Save the Queen until 1984.

At that time, “Australia’s sons” was replaced with “Australians all” and the second verse featuring “Gallant Cook” and the declaration “Britannia rules the wave” was scrapped for a new version starting with “Beneath the radiant Southern Cross”.

“It’s not really entrenched in our psyche,” Mr Vickery said. “The national anthem has had a remarkable facility of change and adaptation – it even talks about advancing Australia; that is adopting and embracing change, rather than being stuck in the mud.”

Mr Vickery has committed to donating his copyright to the Commonwealth should his lyrics be officially adopted for the anthem.

Advance Australia Fair through the decades

The original second verse from 1878

When gallant Cook from Albion sail’d,

True British courage bore him on,

Til he landed on our shore.

The standard of the brave;

“With all her faults we love her still”

In joyful strains then let us sing,

The current second verse (adapted from the third verse added at federation in 1901):

Beneath our radiant Southern Cross

We’ll toil with hearts and hands;

To make this Commonwealth of ours

Renowned of all the lands;

For those who’ve come across the seas

With courage let us all combine

In joyful strains then let us sing,

The Recognition in Anthem proposed verses:

For sixty thousand years and more

First peoples of this land

By song and artist’s hand.

Unite our cultures from afar

In peace with those first here

To walk together on this soil

Respect for all grows there.

From everywhere on Earth we sing, Advance Australia Fair.

In times of drought and flood and fire

When all but hope is gone

Tomorrow may this timeless land

From red-rock heart to sun-filled shore

Our country free and fair.

Beneath the Southern Cross we sing, Advance Australia Fair.

Beneath the Southern Cross we sing, Advance Australia Fair.