First American to study in North Korea reveals what life is really like under Kim – attending a university with virtually no electricity, being followed by spies and visiting zoos full of cats and dogs

The first American to study at a North Korean university shares his harrowing experience in the secluded country where he saw locals gawk at dogs at the zoo, a woman selling snacks on the street be violently taken away, and housing spies keep a watchful eye on residents.

Hailing from Charlotte, North Carolina, Travis Jeppesen, 36, became the first American to study on North Korean soil in the summer of 2016.

The American journalist and author enrolled at the Kim Hyong Jik University of Education where he studied the Korean language for a month. 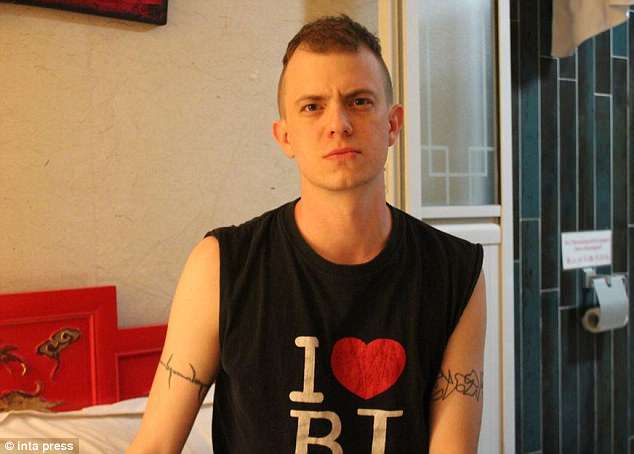 Travis Jeppesen, 36, was the first American to study in North Korean soil in summer 2016 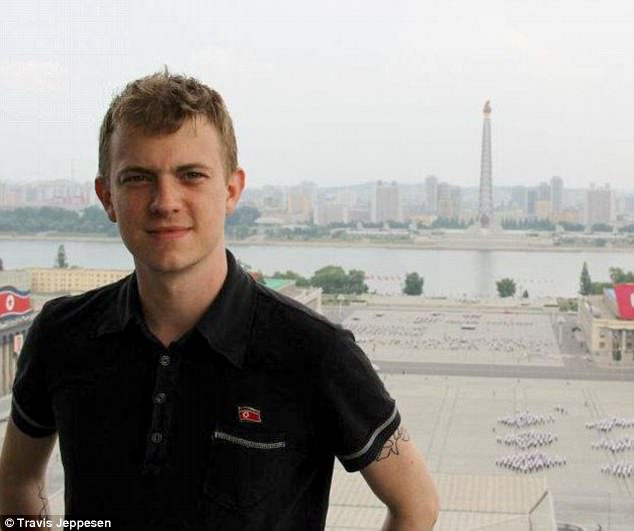 However unlike most study abroad programs he stayed in the luxury of the Sosan Hotel in Pyongyang and had two mandatory guides monitor him in public at all times, according to The Post.

But this wasn’t the first trip for the writer, who has a BA from The New School and a PHD in critical writing, and has visited the reclusive country three times prior to write about the country’s art and architecture for magazines.

Jeppesen studied along with two other expats – a French graduate student and the Australian head of Tongil Tours, the group he was travelling with.

Jeppesen shared a room with one of them in the lavish and palatial hotel, where they were the only guest on the hotel’s 28th floor.

‘My room has two brand-new queen-sized beds and glittering made-in-China furnishings, a big closet, a balcony overlooking the city — and a leaking air conditioner,’ he wrote in his tell-all book See You Again in Pyongyang: A Journey Into Kim Jong Un’s North Korea. 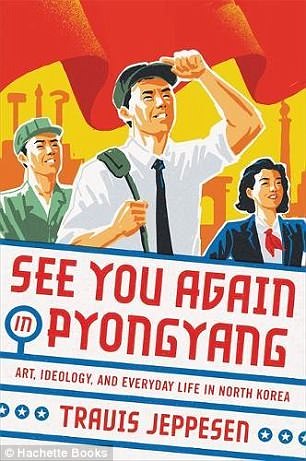 He details his experience in his book See You Again in Pyongyang: A Journey Into Kim Jong Un’s North Korea, pictured above

At the hotel Jeppesen rubbed shoulders with the business crowd that gathered at the restaurant and bar, who warned the American to be careful in times of heightening US – North Korea tensions.

Every morning he was shocked awake by the eerie 5am wake up call dedicated to Kim II-sung that played the instrumental song ‘Where Are You, Dear General?’

‘It’s very, very haunting, and very bizarre. It almost sounds like something out of a David Lynch movie. It’s one of the things that reminds you that Dear Leader is with you everywhere you go. At every moment,’ Jeppesen said to The Post.

For class Jeppesen attended lessons for two hours every morning Monday to Friday.

Afternoons and weekends were ‘devoted to homework and excursions.’

However he studied in shocking conditions as his university was usually without electrical power, light, and had little working plumbing.

‘The hallways were dark. There was no plumbing really in the bathrooms. It hit home that this is a really poor third-world country. Everything is very bare-bones,’ he said.

Jeppesen also noted how every housing unit had its own official spy called the inminbanjang, who was typically a middle-aged or elderly woman.

She would observe the neighborhood and residents and report back to the government.

In his book Jeppesen says her job is to ‘heighten revolutionary vigilance’ as one propaganda poster described.

‘[She keeps] a watchful eye over the comings and goings of her assigned unit, down to the smallest detail. A good inminbanjang knows exactly how many spoons and chopsticks are in each family’s kitchen and can spill that information on cue if the need should arise,’ he wrote. 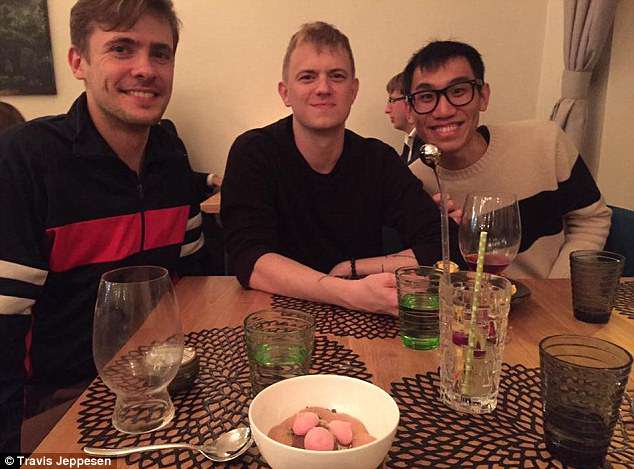 Jeppesen said he found North Korean people to be friendly, pictured above with two friends in 2016 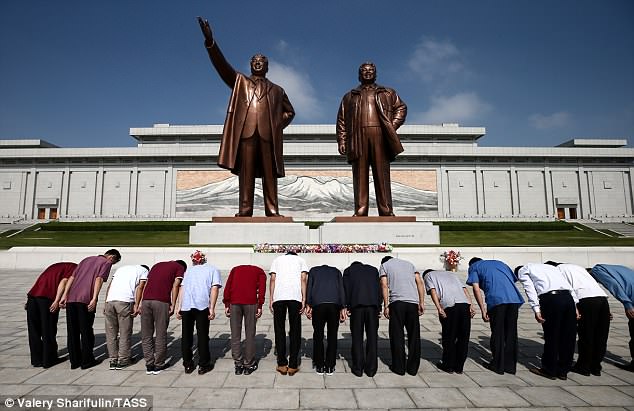 In his book he reveals how he lived in a lavish but empty hotel, was escorted by two mandatory guides in public at all times, and was woken up every morning to a 5am ode to Kim II-sung 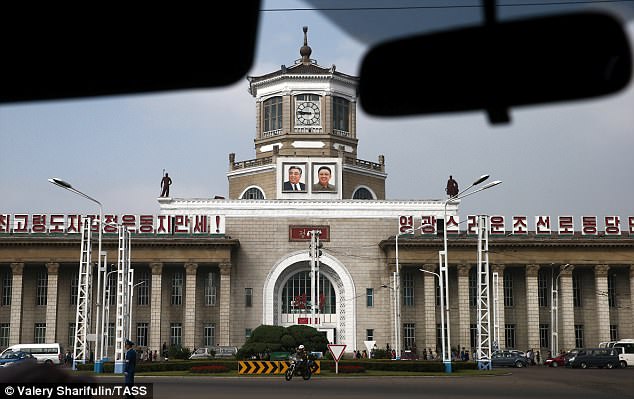 He adds that the hardest part of the trip was the psychological toll of being constantly watched and monitored as he studied in the nation’s capitol, railway station in Pyongyang above 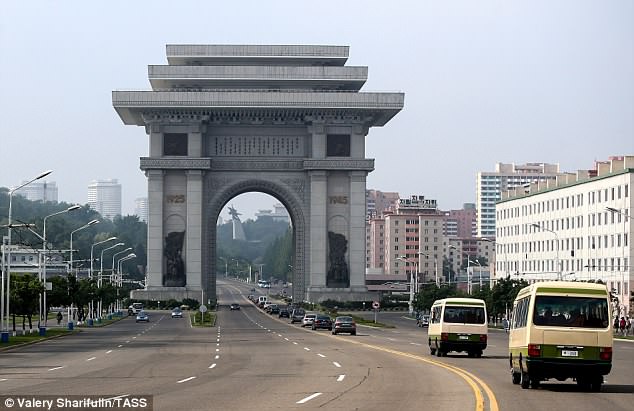 He describes everyday life where men and women wear colorful clothing, head to the zoo for fun, and are under the constant watchful eye of their official housing unit spy, view of Pyongyang above

But that doesn’t mean there aren’t loopholes.

Relaxed inminbanjangs would turn a blind eye to certain rules such as one woman Jeppesen met who was ‘known to rent out her second room as an hourly love hotel for extra income.’

Contrary to the mental picture of uniformed citizens and regimented society many might have of North Korea, Jeppesen says times are changing and fashion has become more relaxed.

Men were seen wearing short-sleeve shirts of all colors and designs as well as flashy Rolexes on their wrists, though they’re often fake ones.

A hot trend for the ladies was high heels sported with socks.

One of the more bizarre sights for the student was seeing North Korean citizens visit the zoo which boasts more than 6,000 animals and 650 species and mostly displayed dogs and cats.

‘Having pets was never really part of the culture. North Korea has always been a very poor country, and they’ve always had difficulty feeding their citizens. Keeping an animal you have to feed when you yourself aren’t getting enough rice to get you through the day is an outrageous luxury to them,’ Jeppesen said.

It was at the zoo he was stunned to find an elderly woman selling ice cream and candy be violently taken away by two police officers.

‘I subtly tried to watch where they were taking her, but I lost sight of them…I don’t think it ended well for her,’ he wrote in his book.

As for home entertainment, Jeppensen said the evening news was a monotone review of Kim Jonh-un’s daily schedule recited as ‘cheery symphonic music’ played in the background.

While watching TV at a government official’s home, Jeppesen said the officer turned off the news and instead played a ‘pirated copy of Zootopia he bought at a DVD stall.’ 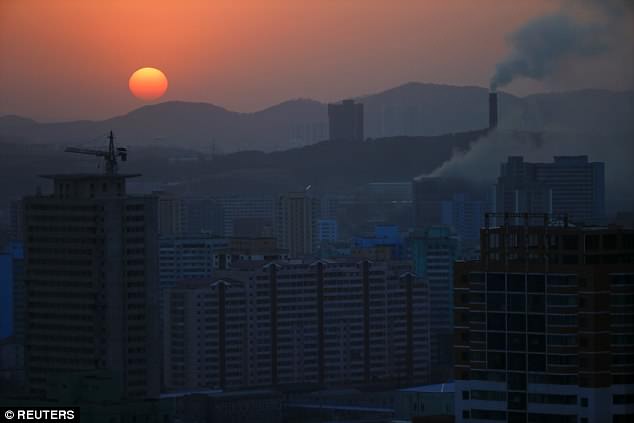 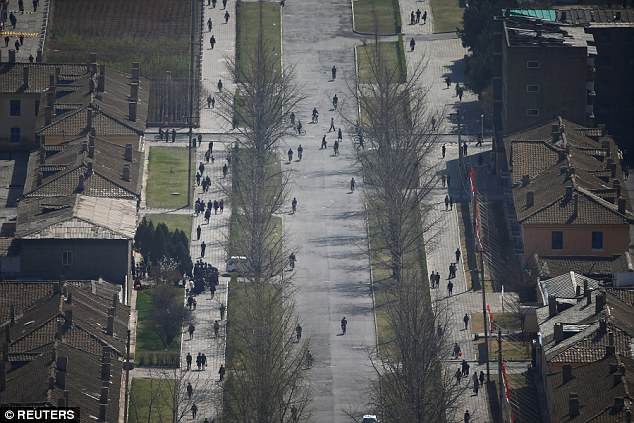 For the student, the hardest part of the experience being constantly watched as he assumed his hotel room, computer and phone were all bugged.

‘Psychologically, it was very difficult and stressful. It had all these weird side effects. There were moments when I finally was alone and nobody was watching me, yet it felt creepy because I was so used to being watched,’ he said.

‘Also, even when you’re not being monitored, people are staring because I’m a white guy and they’re not used to seeing foreigners in North Korea,’ he added.

He said he felt ‘psychological stress of not being able to communicate with my parents and my partner back home.’

Despite the hardship of being away from family and friends, he opted against buying a SIM card that gives internet access to his mobile phone to avoid having his e-mail spied upon.

At the end of his term Jeppesen was awarded a certificate for successfully completing the beginners level Korean language for foreigners course.

He returned for an additional two weeks of class last spring.

Despite his desire to return yet again, he was not allowed to do so following a US travel ban on the country following the imprisonment and death of American student Otto Warmbier, who was jailed in North Korea after stealing a banner from a hotel in 2016.