Local fisherman was also mauled to death by a HIPPO just hours before Chinese tourist, 66, was killed while taking photos in the same area in Kenya

A Chinese tourist has died after he was attacked by a hippo as he was taking pictures on the shores of Lake Naivasha in the Rift Valley, Kenya’s wildlife authority said.

The man was pronounced dead on arrival at the Naivasha District Hospital, while another tourist survived the attack on Saturday evening, according to the Kenya Wildlife Service.

The agency named the dead man as Chang Ming Chuang, 66, and the survivor as Wu Peng Te, 62.

His death happened just hours after a local fisherman was killed by another hippo in the same area. The deaths brought to six the number people who have been killed by hippos around Lake Naivasha so far this year. A Chinese tourist has died after he was attacked by a hippo as he was taking pictures on the shores of Lake Naivasha (pictured) in the Rift Valley, Kenya’s wildlife authority said

The Chinese embassy did not immediately respond to a call for comment.

The head of a boat owners’ association in Navaisha told Kenyan newspaper The Star that higher than normal water levels were causing hippos to wander from the lake on to nearby farms and hotel properties searching for pasture.

After a severe drought last year, Kenya had several months of heavy rains earlier this year that caused serious flooding, including around Lake Naivasha, 56 miles southeast of Nairobi.

Tourism is one of the country’s main sources of foreign exchange and nearly 1.5 million tourists visited Kenya last year, according to the tourism ministry

Wildlife service spokesman Paul Udoto said the circumstances are not clear in which the two Chinese men were attacked.

He said attacks on tourists are rare because they are usually protected by guides.

Mr Udoto said hippos and lone buffalo pose the greatest danger to humans and there have been many attacks in which civilians and even rangers have lost their lives. 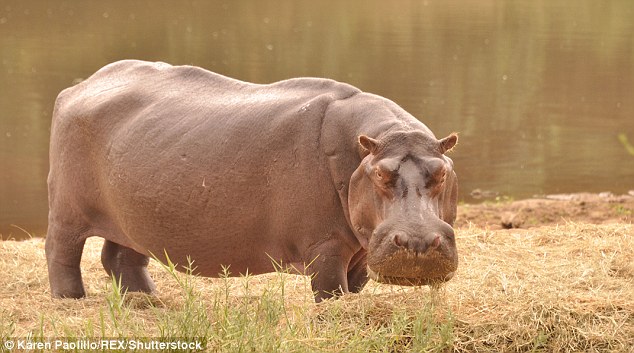 The man, who had been taking photographs of the hippos, was pronounced dead on arrival at the Naivasha District Hospital (stock image)

How often do animals attack tourists?

Although animal attacks on tourists are uncommon, and rarely fatal, they are not unheard of.

In May this year, Mike Hodge, a 72-year-old British expat living in South Africa was attacked by a lion living on his sanctuary.

Horrifying footage shows Mr Hodge entering the lion’s enclosure at the Marakele Animal Sanctuary before being dragged away into bushes and clawed by Shamba as onlookers scream in terror.

The big cat eventually dropped Mr Hodge and a staff member outside the camp shot and killed Shamba to save his life, according to local media. In a statement, the family – Mr Hodge, his wife Chrissy and daughter Emma, 29 – said they were ‘devastated’ by the loss of the lion which they said had been raised from a cub.

In February, a British tourist from the Isle of Wight was attacked by a ferocious cow which became angry after she sang it a Black Eyed Peas song.

Mellisa Meville, 25, from the Isle of Wight, has been travelling around India since November last year.

But she was left with injuries to her face, shoulder and knees after the savage attack in the street at 4pm on February 15.

Mellisa was walking back to her hotel in Jaisalmer, Rajasthan, northern India, when she noticed a huge stray cow with a sizeable hump.

Amused by how large the creature was, she jokingly began singing the popular song ‘My Humps’ by the Black Eyed Peas.

But the cow, unamused by her rapping, suddenly charged at her with its horns.

Just last month, a gang of poachers who broke into a South African game reserve to hunt rhinos came off second best when they were attacked and eaten by a pride of hungry lions.

At least three hunters are believed to have been devoured by the predators, judging by the bloody scene on the Sibuya Game Reserve near Kenton-on-Sea in Eastern Province, South Africa.

One head and a number of bloodied body parts and limbs have been recovered from the area, along with three pairs of empty shoes.

And in June, a tourist in South Africa stroked a lion and got the fright of his life when he was met by a terrifying roar.

Shocking footage shows the man petting the big cat’s back with the vehicle’s window wide open.

The male lion then turns around and lets out an almighty roar prompting the tourists to flinch and slam the window shut before letting out loud sighs of relief.

A month before, an award-winning director was killed by a giraffe in the South African bush.

Carlos Carvalho had worked on most of the series of the hit family drama that featured a British family building up an animal hospital in the South African bush.

But the 47-year-old was sent flying 16 feet through the air while working on a feature film with Gerald the Giraffe after the animal headbutted him, causing devastating head injuries.

He was airlifted from the scene in Broederstroom, South Africa, to the same hospital where British safari park owner Mike Hodge is recovering from a lion attack in Johannesburg but surgeons were unable to save him.

And in April, a German couple in Namibia survived a horrific tug of war with a leopard after the predator attacked and tried to drag one of them out of the open window of their camper van by the head.

Hardy Specker, 61, and partner Petra Windmeisser, 60, had pulled over to sleep in the Kuiseb Canyon in Namibia when they were woken by loud scratching at a window in the early hours.

Mr Specker got up to close the window at 1am but as he pulled it shut a leopard jumped up the side of the camper van and gripped his head with its claws and jaws.

Ms Windmeisser told The Namibian how her screaming husband was being dragged out of the window when she rushed forward and grabbed his legs and fought with the leopard.