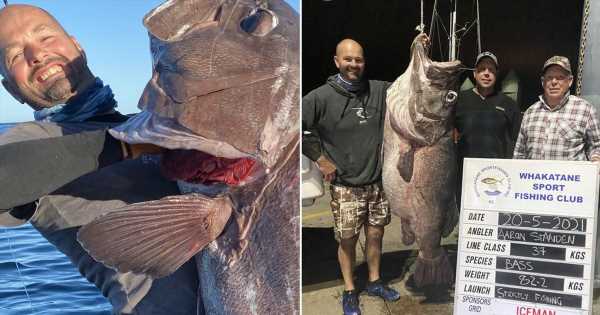 A lucky real estate agent reeled in a ginormous 82.2kg fish off the East Cape, in New Zealand.

Aaron Standen took about 30 minutes to pull the beast of a bass into his boat when he was fishing in Hicks Bay on May 20.

He has now shipped the fish out to homes across his area and shared the haul with his friends, neighbours and children – who he says are having fish burgers for supper.

The keen angler told the NZ Herald: "It's a pretty special fish. For me, it's the bass of a lifetime.

"Nothing's going to waste, there's plenty to go around.

"Friends and neighbours have come to get a cut. And friends, they've given some to their friends."

Despite the fish being almost as big as Aaron himself, he says it isn't his biggest ever catch and claims he once caught a 213kg blue marlin in 2002.

But the bass is by the far the largest he's caught of its type and only the third of its size caught on a Coastal Fishing Charters' outing in 15 years.

Even the head and carcass have gone to use, with Aaron cashing in by selling it to one of his real estate clients who is using it for a feed.

The dad has removed balance bones from the brain of the fish in the hope someone will be able to tell him how old it is.

Some bass can reach an incredible two metres in length and 100kg in weight.

It comes after a Brit fisherman reeled in a terrifying 10ft shark weighing a whopping 500lbs off the coast of Cornwall.

Kevin Finch, 30, battled for more than an hour with the porbeagle shark which he said was “like trying to fight a lorry with a stick”.

He later unhooked the porbeagle shark and released it back to the sea.