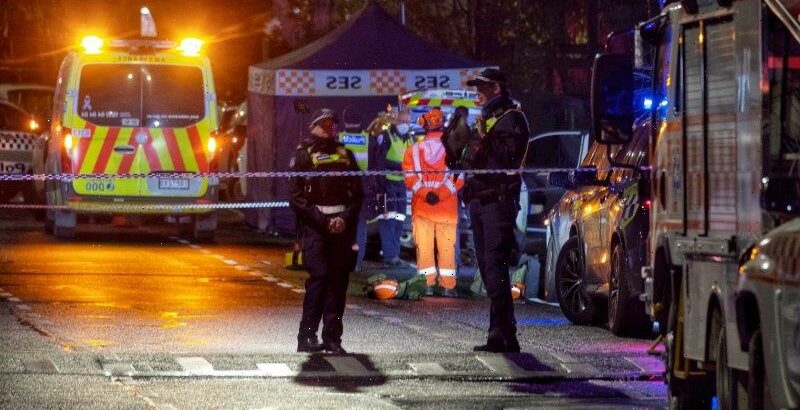 Homicide detectives believe a man gunned down in an inner-city street was running away from his shooter and are urging witnesses to come forward as they hunt the gunman, who had been in what’s thought to be a dark-coloured Audi SUV.

Residents have expressed concern for their safety after emergency services were called to Napier Street in Fitzroy at 4.15pm on Tuesday following reports that a man had been found with life-threatening injuries and his shooter was still on the run. 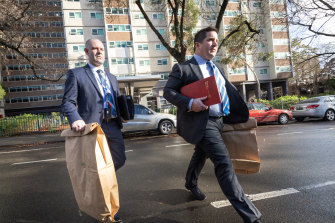 A post-mortem was being conducted on the dead 55-year-old from Fitzroy. Police said after the shooting the Audi briefly drove south to Gertrude Street before turning left and speeding away.

The man was shot just a few hundred metres from the Fitzroy police station. On Wednesday morning few from the public housing towers wanted to comment on what had happened.

Claire, a tower resident who did not want to provide her last name, said neighbours with young children had been concerned for their safety but were comforted by police assurances that they believe the shooting was targeted.

“There are a few neighbours that have just moved in, young women with little children. They were really worried,” she said. “I said to them, ‘it can happen anywhere’. It’s just sad, you know, with all these shootings happening.”

Victoria Police Detective Superintendent Paul O’Halloran says they have identified the victim, who lived on Napier Street, and were asking witnesses to come forward with statements or CCTV.

“We seek and would like to obtain any CCTV or dashcam footage or any witnesses who may have seen that particular incident. 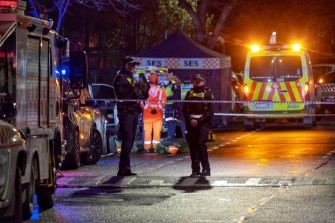 Police and emergency services personnel at the scene of the fatal shooting in Fitzroy on Tuesday evening.Credit:Luis Ascui

“At this stage, there are no links that we can confirm to any organised crime at all, motorcycle gangs or Middle Eastern crime, or the recent other shootings that have occurred.”

It is unclear how many shots were fired. Passersby found the man lying in the street and called triple zero, thinking he had been struck by a car. Ambulance crews treated him at the scene, but he could not be saved.

Police cordoned off the area and established a crime scene following the incident. About a dozen officers, including homicide detectives, remained at the scene on Tuesday evening.

O’Halloran said the shooting was not related to recent gun violence incidents in Melbourne. He said the man was not linked to a bikie gang or other organised crime syndicate and appeared to know the other people involved.

The shooting comes less than 48 hours after a separate incident in Noble Park, where a 36-year-old was killed inside a home on Corrigan Road. The alleged killer fled the scene on foot and is yet to be arrested by police.

The incidents are the latest in a spate of shootings across Melbourne over the past three months that have claimed the lives of at least four people.

Korey Kesici, 22, was shot multiple times outside his family home in Mickleham shortly after midnight on May 5 in what police said was a planned hit.

Two days later, another man was rushed to hospital with multiple gunshot wounds following an alleged targeted attack in Melton.

In June, kickboxer and former Mongols bikie Suleiman “Sam” Abdulrahim was peppered with bullets when leaving a funeral in Fawkner.

The shooters crashed their getaway car into a fire hydrant before carjacking a woman and child at gunpoint and fleeing in their Ford Territory, while an injured Abdulrahim drove his Mercedes to Fawkner police station.

Less than a week later, a 49-year-old man was gunned down and killed on a street in Cranbourne following an altercation with another man.

Anyone with information is urged to contact Crime Stoppers on 1800 333 000 or submit a confidential report online at www.crimestoppersvic.com.au.