A New York Times report saying President Donald Trump paid just $750 in federal income tax the year he entered the White House has added yet another dynamic to a contentious and fast-developing election season.

The report, which included the revelation that thanks to colossal losses, Trump paid no federal income tax at all in 11 of the 18 years the Times reviewed, is set to tarnish the president’s decades-crafted image as a successful businessman. That carefully maintained brand helped Trump capture the presidency in 2016.

The president has vehemently denied the report, on Sunday calling it “fake news” and on Monday tweeting he had paid “many millions of dollars in taxes” but was entitled to depreciation and tax credits. He also said he was under-leveraged, meaning he has more assets than debt.

However, the revelations further deepen the uncertainty surrounding a tumultuous presidential campaign set against the backdrop of the coronavirus pandemic, racial unrest in American cities and a ferocious battle over the Supreme Court seat left vacant by the death of Justice Ruth Bader Ginsburg.

Trump revelations are also expected to feature prominently in the first presidential debate with challenger Joe Biden on Tuesday, turning attention to tax documents that, despite tradition, Trump has kept from the public eye.

Here are five key takeaways from the Times’s reporting

The Times report said Trump initially paid $95m in taxes over the 18 years it had studied. However, he managed to recover most of that money by claiming, and receiving, a stunning $72.9m federal tax refund.

According to the newspaper, Trump also pocketed $21.2m in state and local refunds, which are typically based on federal filings.

Trump’s outsize refund is the subject of a long-standing Internal Revenue Service audit of his finances. The audit was widely known, with Trump claiming it is why he cannot release his returns. However, the Times report is the first to identify the issue that was mainly in dispute.

As a result of the refund, Trump paid an average of $1.4m in federal taxes from 2000 to 2017, the Times reported. By contrast, the average US taxpayer in the top 0.001 percent of earners paid about $25m annually over the same time frame.

From his homes, his aircraft – and $70,000 on hairstyling during his television show The Apprentice – Trump has deeply intertwined his luxurious lifestyle with his business dealing, to the benefit of tax liability, according to the Times report.

Because Trump’s homes, planes and golf courses are part of the Trump family business, he has recorded them as business expenses. That classification allows him to write off those expenses as deductions. 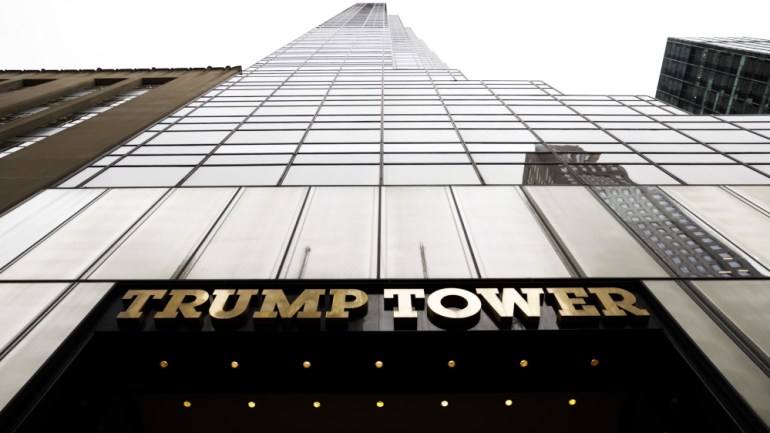 The president has frequently pointed to his far-flung hotels, golf courses and resorts as evidence of his success as a developer and businessman.

However, those properties have been draining money, according to the Times.

The newspaper reported that Trump has claimed $315m in losses since 2000 on his golf courses, including the Trump National Doral near Miami, which Trump has portrayed as a crown jewel in his business empire. Likewise, his Trump International Hotel in Washington, DC has lost $55m, the Times reported.

In contrast, the Times found that a large sum of Trump’s profits came from selling his own brand. It reported the former reality television star reported making a combined $427.4m from 2004 to 2018 by selling his name and image through various endorsements and licensing deals.

Since Trump began his presidential run, lobbyists, foreign governments and politicians have lavished significant sums of money on his properties, a spending spree that raised questions about its propriety and legality.

The Times report illustrates just how much that spending has been: Since 2015, his Mar-a-Lago resort in Florida has taken in $5m more a year from a surge in membership.

The Billy Graham Evangelistic Association spent at least $397,602 in 2017 at Trump’s Washington hotel.

Meanwhile, overseas projects have produced millions more for Trump – $3m from the Philippines, $2.3m from India and $1m from Turkey.

Trump debt will soon be due

Trump is set to face what will likely be heavy financial pressures from the enormous pile of debt he has absorbed.

The Times said the president appears to be responsible for $421m in loans, most of which will come due within four years.