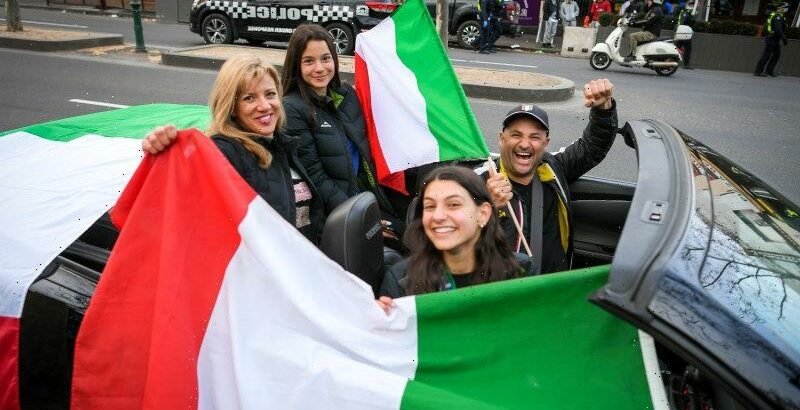 Italian Formula One fans were devastated when this year’s Australian Grand Prix event was lost to coronavirus, but they won the morning on Wednesday as Italy triumphed over Spain in the Euro 2020 semi-final.

Melbourne’s “Little Italy” came alive in the early hours, with people scrambling into cafes and bars on Lygon Street to watch the game. 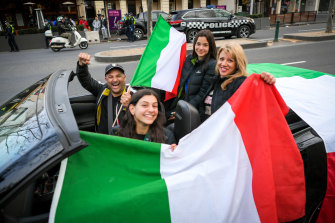 “The crowd ended up being all at the piazza there in the park and there was a bunch of crowds letting off flares and everything like that,” Mr Mandorla said.

“I really, really can say that people really acted so well, and behaved really well. It was just a very awesome [scene].”

Police patrolled Lygon Street on Wednesday morning and said they were investigating a number of flares that were let off in Argyle Square.

As at 8.30am, they hadn’t made any arrests but said they would investigate to see if anyone breached the Chief Health Officer’s directions. 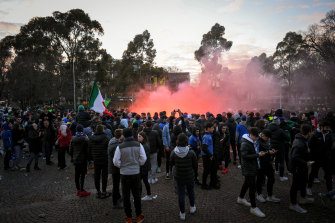 Hundreds of people attended the festivities at Lygon Street on Wednesday morning.Credit:Eddie Jim

Mr Mandorla said police did a great job handling the festivities and making sure people were safe from the flares and the community was thankful for being able to celebrate Italy’s win.

Formula One fans, especially supporters of the Ferrari team, have a tradition of cruising up and down Lygon Street when the Australian Grand Prix is on in Melbourne, so many in the community were disappointed by the state government’s decision on Tuesday to cancel this year’s race for the second year in a row. Mr Mandorla said Italy’s win was a welcome bit of good news after the grand prix was called off.

Cafe Notturno has broadcast soccer games for about three decades.

Owner Mr Cultrera said Wednesday’s turnout was “incredible”. Not only did people need a boost after the Formula One cancellation but the championship was a chance to get out and celebrate after being cooped up because of COVID-19. 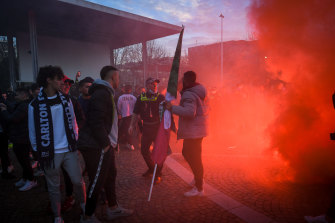 Police were patrolling Lygon Street on Wednesday morning during the celebrations.Credit:Eddie Jim

“We noticed from the first games, which weren’t that serious – they weren’t knock-out games so if Italy lost, they would still be in – but we noticed from early on the demand … was incredible,” Mr Cultrera said.

“A lot of people said the same story, [that they] were just tired of COVID and it was something new to look forward to.

“It was a lot more demand than usual I think because of COVID.”

Mr Cultrera said the people who showed up on Wednesday morning were a mix of young people, children, older people and families – a fact Mr Mandorla loved, particularly as he was able to share the tradition of attending Lygon Street for the Euro 2020 with his daughters.

Denmark and England face off in the other semi-final at 5am on Thursday, Melbourne time. Italy will play the winner of that match in the competition’s decider on Monday morning. 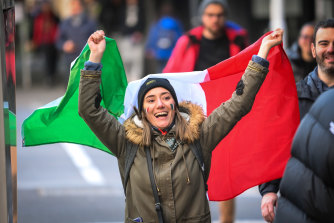 It’s a tradition for many to head to Lygon Street to watch Euro 2020 games.Credit:Eddie Jim