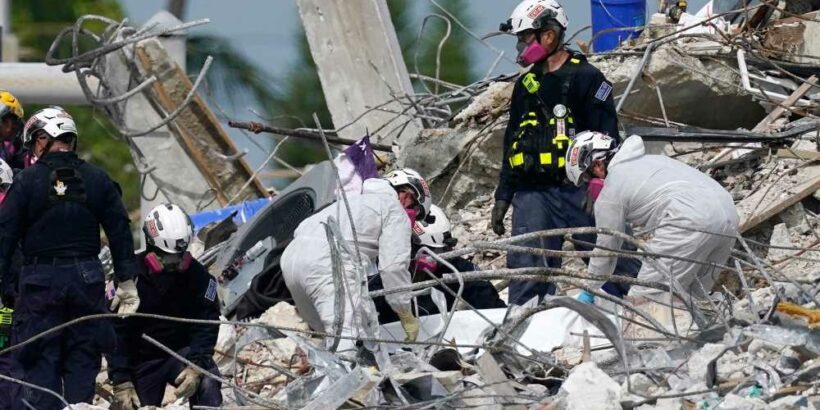 ‘Pillars of the community’ killed in building collapse remembered in NYC

“Due to the hard work today, despite the rain and the other adverse conditions, we have recovered four additional victims,” Miami-Dade Mayor Daniella Levine Cava told reporters — hours after four other bodies were found in the rubble.

Cava said 29 of the bodies have been identified.

Another 109 people are still missing.

The mayor also said she received a call from President Joe Biden earlier in the day to check on the progress of the rescue efforts.

FEMA and other federal agencies are now on the site of the collapse, she said.

The update comes as hundreds of first responders continue to sift through the ruins of Champlain Towers South in Surfside, which collapsed early June 24.

On Tuesday, workers toiled through high winds and rain from Tropical Storm Elsa as they continued what remains a search and rescue operation — despite diminishing hopes of finding anyone alive.

Work intensified since an unstable remaining portion of the building was demolished late Sunday, erasing safety concerns for workers on the pile.

In a grim update earlier Tuesday, Miami-Dade Fire Chief Alan Cominsky told reporters that “we’re not seeing anything positive” while digging on the pile.

“The key things we are looking for all throughout in regards to voice space, liveable spaces, we’re not coming across that,” Cominsky said.

Meanwhile, the first victims of the tragedy were laid to rest Tuesday, including grandparents who were buried in Queens.

Tzvi Ainsworth, 68, and his wife Ingrid “Itty” Ainsworth, 65, had just celebrated the birth of a granddaughter a day before they were killed in the collapse.

Police said they were pulled from the rubble Monday.

The couple was mourned at Chabad-Lubavitch World Headquarters in Crown Heights before they were buried at Old Montefiore Cemetery in Queens.

In Miami Beach, a family of four killed in the Champlain collapse were mourned at funeral services at St. Joseph Catholic Church.