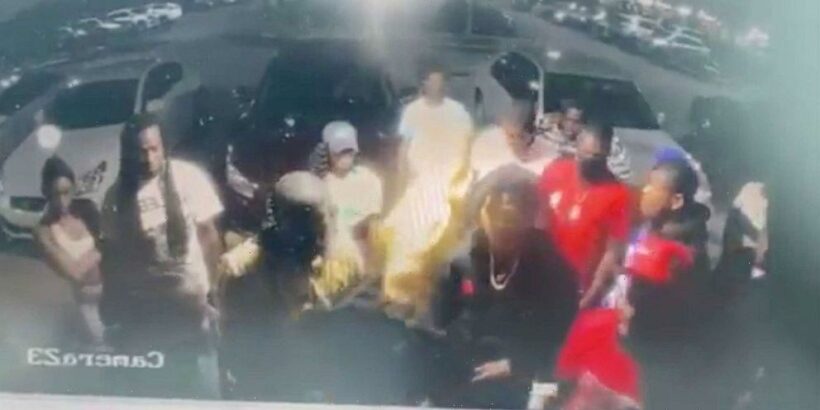 Police investigating the mass shooting rampage in Miami Dade-County, Florida, are reviewing videos like this one, which shows partygoers gathered outside a banquet hall just before the three gunmen opened fire.

The video, obtained by ABC affiliate WPLG in Miami, shows the victims duck and crawl for cover after shots rang out early Sunday at the El Mula Banquet Hall in Hialeah, where a local rapper was celebrating his birthday.

One man appeared to use his body to block a woman from the bullets as they hid between cars.

Twenty-three people were shot, including two fatally, in what Miami-Dade County Commissioner Keon Hardemon called an act of domestic terrorism.

The gunmen waited outside of the banquet hall for about 40 minutes and then opened fire on patrons as they left, Miami-Dade Police Director Freddy Ramirez told ABC News on Sunday. Some patrons returned fire, Ramirez said, and over 100 shell casings were found at the scene.

Police on Monday released surveillance video of the three gunmen exiting a white Nissan Pathfinder at the scene. The suspects ran back to the car about 10 seconds later, once the carnage was over.

Police said the car — which was stolen several weeks ago — was recovered Monday evening, submerged in a canal.

The three suspects remain at large.

Authorities said they believe the shooting was motivated by an “ongoing rivalry” between two groups.