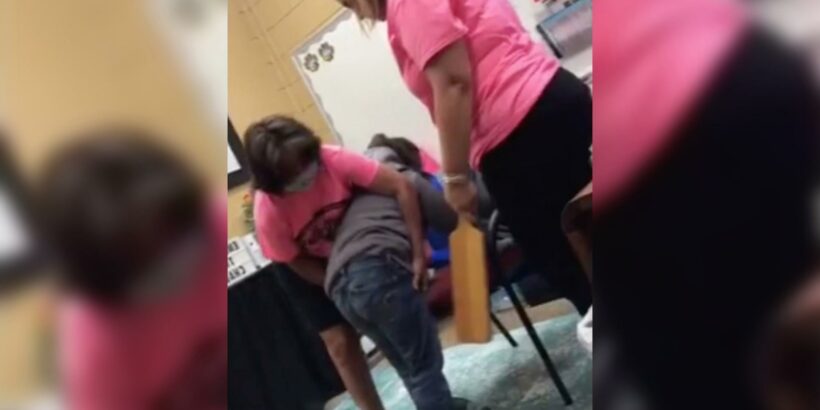 A Florida elementary school principal is under investigation for whacking a 6-year-old girl with a paddle in a shocking incident that was captured on video by the student’s mom, according to a local report.

Melissa Carter, head of Central Elementary School in Clewiston, was filmed bending the child over and hitting her several times with the wooden paddle, local outlet WINK-TV reported.

“The hatred with which she hit my daughter, I mean it was a hatred that, really I’ve never hit my daughter like she hit her,” the girl’s mom told the TV-station in Spanish. “I had never hit her.”

The mom, who wasn’t named in the report, said she was called by the school on April 13 because her daughter had apparently caused about $50-worth of damage to a computer.

She went to the school to pay the fee — but was sent to the principal’s office, where she found her child with Carter and a school clerk, according to the report.

Then, “the principal started to scream,” the tearful mom said.

She looked around and got nervous after noticing a lack of surveillance cameras.

“What are we doing in this place? My daughter and I, alone,” the mom said she wondered.

So she hid her phone in her purse and decided to record the brutal punishment — fearing that authorities wouldn’t believe her otherwise.

“Nobody would have believed me,” the mom told the outlet. “I sacrificed my daughter, so all parents can realize what’s happening in this school.”

She took her daughter to a doctor later that day to document the red marks and bruises caused by the paddle, the report said.

“I’m going to get justice for my daughter because if I could not do it in front of her, I’m going to do it with justice,” the woman said.

The Clewiston Police Department and the Department of Children and Families confirmed to the outlet that they are investigating the incident.

The State Attorney’s Office is now weighing whether to bring criminal charges against Carter and the clerk, according to Bret Provinsky, a lawyer for the family.

“That’s aggravated battery,” said Provinsky, an attorney who works with undocumented immigrants. “They’re using a weapon that can cause severe physical, harm.”

“The child is terrified, she feels vulnerable. There’s nothing she can do in the hands of these adults, who treated her so brutally, savagely, sadistically,” he added.

Neither Carter, Self or the school district returned requests for comment from the outlet.