Miami: Florida's Senate and governor's races are going to a recount, triggering a frenzied process that will decide two key offices in the largest US swing state, and setting off outcries from Republicans led by President Donald Trump.

The Republicans' advantage in both races has fallen below the 0.5 percent threshold required to trigger mandatory machine recounts, Secretary of State Ken Detzner said in a statement on Saturday. 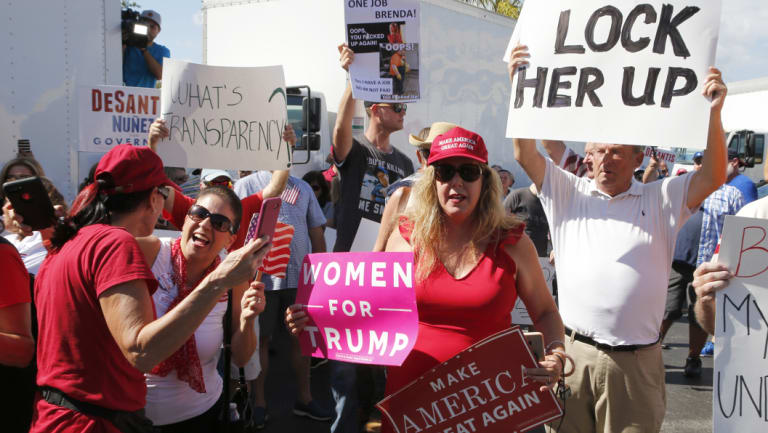 A crowd protests outside the Broward County Supervisor of Elections office on Friday over the midterm count.Credit:AP

The move quickly drew a rebuke from Trump, who's in Paris to commemorate the 100th anniversary of the end of World War One: "Trying to STEAL two big elections in Florida!" Trump tweeted.

In the Senate race, the unofficial count had Republican Rick Scott leading incumbent Democrat Bill Nelson by about 12,600 votes among roughly 8.2 million votes cast in the November 6 election. The race for governor between Republican Ron DeSantis and Democrat Andrew Gillum was separated by about 33,700 votes, with the Republican also leading there.

The recounts will decide the fate of both a crucial Senate seat and the governorship of a state that will also prove important in the 2020 presidential contest.

Trump, Scott and fellow Republicans have attempted to sow doubt about the process and raise suspicions about electoral officials, especially Broward County's election supervisor Brenda Snipes, who oversaw the vote in the state's second-most populous county, which includes Fort Lauderdale and Coral Springs.

Republicans said Snipes failed to provide necessary transparency as votes dribbled in and Democrats closed the margin. Eugene Pettis, a lawyer representing Snipes, said "there is no basis" for fraud allegations, adding: "It's very important that we listen to facts and not fiction."

Floridians also struggled to understand why there were many fewer votes cast for senator than for governor in Broward, given that they were on the same ballot and no discrepancy of that magnitude occurred anywhere else.

If a machine recount puts the results within a quarter of a percentage point, county canvassing boards would do a manual recount. The official results of a manual recount would be due by November 18. 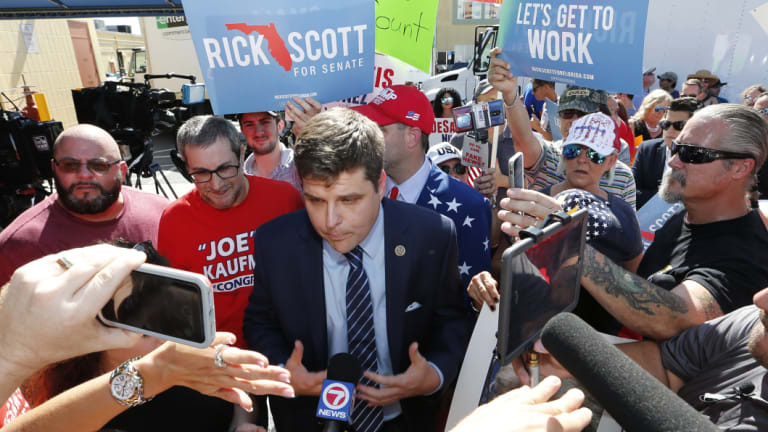 US Representative Matt Gates speaks with the media during a protest at the Broward County Supervisor of Elections office on Friday.Credit:AP

Florida elections have a history of minuscule margins and allegations of improprieties at polling stations and in vote-counting. The 2000 presidential election was decided when the US Supreme Court halted a Florida recount and made Republican George W. Bush the winner over Democrat Al Gore. That recount was marked by America's fixation on Florida's punch-card ballots, famed for their hanging chads, which are no longer in use.

Texas Republican Senator Ted Cruz, in an interview to air Sunday on CBS's "Face the Nation,' said that Florida's history "doesn't give you a great deal of confidence" in the current situation. "It could almost always be a bit of both of incompetence and – and the potential for malfeasance," Cruz said.

But despite the widespread comparisons, much has changed in Florida since then. In addition to more sophisticated voting technology, the Florida Election Reform Act of 2001 created a mechanism to automatically trigger a recount within a certain threshold. As such, trailing candidates don't actually have to request a recount, although they could refuse one.

Gillum, the Democratic candidate for governor, blasted Trump and Scott's remarks about voting fraud, referring to them as part of a "chorus calling for the ending of this process."

"In America, we count every vote regardless of what the outcome may be," Gillum said Saturday in an event broadcast on his Facebook page.

DeSantis said Saturday in a YouTube video that the latest tallies only confirm his victory, and that he's focused on preparing his new government. Scott tweeted that "we won't let liberal activists from all over the country come to Florida and steal this election."