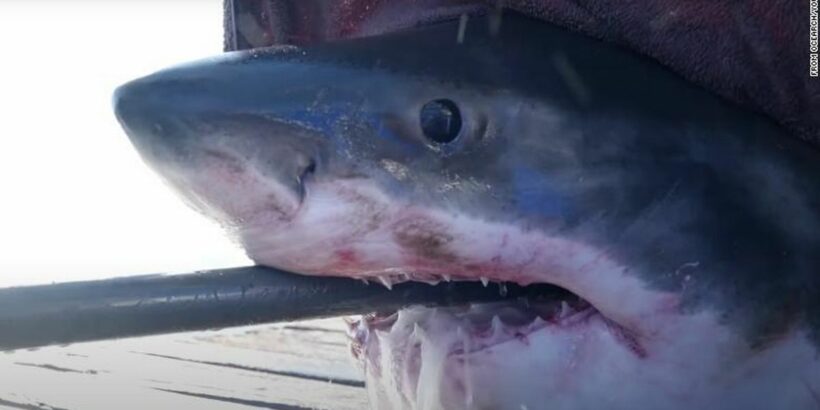 Weighing over 114 stone and measuring more than 12 feet long, the massive adult male has been named Scot.

The group fits sharks with electronic trackers which ping their locations whenever they come above the ocean's surface, allowing them to "help scientists collect previously unattainable data in the ocean".

Scot was actually the first ever shark tagged by OCEARCH when they launched an expedition in Nova Scotia, Canada, in 2021. He was named in honour of the "welcoming and ocean first dedicated people" there.

Their data shows that since he was first tagged, Scot has travelled a whopping 3,910 miles down the east coast towards Florida in just 119 days.

He arrived around the Florida Keys and Gulf Coast on Valentine's Day this year and has been relaxing there for the past five weeks.

His most recent capture and release was OCEARCH's 74th in the Northwest Atlantic Ocean.

According to the Florida Fish and Wildlife Conservation Commission (FWC) Florida's waters are home to more than 13 species of shark.

The beasts tend to move closer to shores during the spring and summer – hence why shark activity peaks around April and October – but shark attacks in Florida remain pretty rare.

The FWC say that Spring Breakers are actually 30 times more likely to be hit by lightening than be killed by Scot or one of his mates.

Great whites like Scot are classified as vulnerable by the World Wildlife Fund (WWF), the categorisation below endangered.

OCEARCH say that this is concerning given the important role they pay as the apex predators in their ecosystem.

They explained: "Great white sharks are central to the functioning of ecosystems and the maintenance of biodiversity."