The Japanese soufflé pancake seems to defy pastry physics: An airy vanilla batter is cooked in a pan, which leaves it lightly toasted on each side and cloudlike in the center. As wobbly as fresh silken tofu and served in tall stacks, each cake manages to maintain its structure, even after it’s dressed with toppings like matcha custard sauce, chewy boba pearls, fresh berries or cascades of maple syrup and melted butter.

The pancakes are a fast-growing food trend on Instagram, where nearly 50,000 photos are tagged #soufflepancake. In addition to their attractive, springy texture and sweet, colorful toppings, there seems to be a third factor in their social media success: a long line. For the food-obsessed, a line can be like catnip. They want to taste what’s at the end of it, and posting a photo of the experience is proof that they did.

“People love to line up,” said Karen Li Lo, one of the owners of Motto Tea Cafe in Pasadena, Calif., where soufflé pancakes are on the menu. “They like feeling like they are a part of something more.” Today, lines for pancakes can be found across the United States, and in London, where the wait for an order at the new cafe Fuwa Fuwa has been compared to purgatory.

SOUFFLÉ PANCAKES! ? @gramsanfrancisco has landed in the US! ?? —————————————— I’ve been wanting to try Japanese pancakes ? for YEARS. Gram only makes 90 servings of their premium pancakes a day…so exclusive! SO fluffy & delicious like a cloud ☁️— congrats on the Friday ? opening, Dorothy! ?

Their origin story is the subject of some speculation.

“I’ve heard they’re inspired by ‘Crayon Shin-chan,’ the Japanese cartoon,” says Sakura Yagi, the chief operating officer of T.I.C. Restaurant Group, which owns the Japanese coffeehouse Hi-Collar in the East Village. Shin-chan, a manga and anime character known for his precocious nature and mischievous humor, was popular in the 1990s. He’s a small child, but slightly plump “and jiggly,” Ms. Yagi said with a laugh, “like a soufflé pancake.”

Hi-Collar started serving its pancakes six years ago, and Ms. Yagi likes to say they’re more of “a precursor” to the soufflé pancake. An eggy, highly aerated batter is rested, then cooked in one-inch-high ring molds on an electric griddle, which yields an exceptionally tall and fluffy mini-cake that, when poked with a fork, reacts like a small, round Tempur-Pedic mattress.

In 2014, two shops in Osaka, Japan — Shiawase no Pancake (translated into English as a Happy Pancake) and Gram Cafe — started selling soufflé pancakes. Both cafes eventually opened outposts in Tokyo, and by 2016 their bouncy pancakes were all over Instagram. Today, Shiawase no Pancake has 26 locations, and Gram operates nearly 60; its newest location opened on Friday in San Francisco.

Most sweet cakes cooked in pans, whether they’re South Indian or Swedish, develop a pillowy or puffy texture. But soufflé pancakes reach greater heights because they’re made from a meringue-based batter. The eggs in the recipe are separated. The yolks are mixed with flour, milk and sometimes a leavening agent like baking powder, while the whites and sugar are beaten into a stiff meringue.

Folded together and scooped into ring molds on a frying pan (or sometimes right onto a griddle, without the ring), they stand nearly as tall and wide as a softball, and have a marshmallowlike texture because they’re cooked at a low temperature for a relatively long amount of time.

“Ideally we want them to be at least two inches tall,” said Ms. Lo, who owns Motto Tea Cafe with Johnny Li, her brother.

Mr. Li, who used to live in Tokyo and still visits several times a year (“I guess you can say I am obsessed with Japan,” he said), first heard of the pancakes about five years ago, and knew he wanted to bring them to Los Angeles.

Ms. Lo developed her recipe based on the pancakes she tasted in Tokyo. But when Motto opened in 2018, she said, “a lot of people were confused.” They didn’t want pancakes in the afternoon, and they certainly didn’t expect to wait a long time for a dish that, at a diner or at home, takes only a few minutes to cook.

“In Japan, people eat pancakes all day, not just in the morning,” Mr. Li said. “They’re like a snack — not breakfast.” Customers who were unfamiliar with the concept were frustrated when their order took 15 minutes to make. (That time is necessary for the pancake to cook all the way through.)

At Taiyaki in Chinatown in Manhattan, customers have complained about the wait, which can average over an hour, leading the shop’s owners to limit pancake availability to weekends only. Some commenters on the shop’s Instagram posts beg Taiyaki’s owners to open outposts in their cities, including Austin and Miami, while others tag friends, asking them to be “pancake buddies” and wait in line together.

And yet, according to Ms. Lo, the Japanese have moved on: The soufflé pancake is just not that big in Japan. 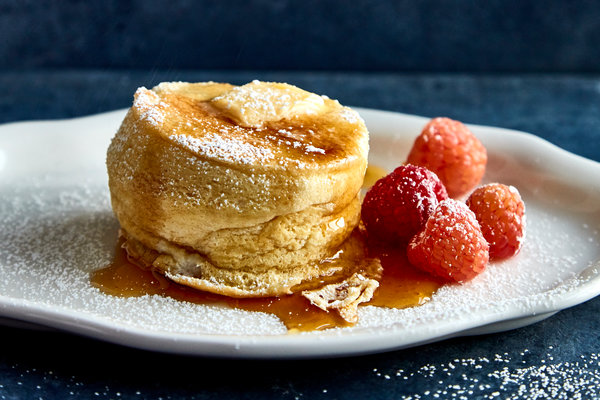