Sassnitz, Germany: Israeli fighter jets have landed in Germany for the first time, in a display of the two countries' strong ties more than 75 years after the end of the Nazi Holocaust and as the German military is struggling with signs of rising far-right sentiment in its ranks.

Beyond the symbolism, the cooperation is a chance for Germany's outdated armed forces, which are considered a critical component of NATO, to learn from Israel's highly trained fighter pilots. For the Israeli military, it is an opportunity to learn about NATO techniques and train in new air spaces, expanding its ability to carry out operations on different types of terrain. 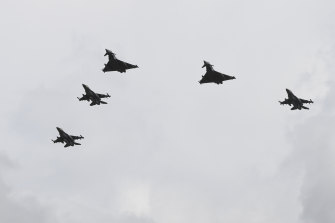 "After the crime against humanity that was the Shoah, it is a moving sign of our friendship today that we are flying side by side with the Israeli air force for the first time in our history," Lieutenant General Ingo Gerhartz, the head of the German air force, said in a statement, using the Hebrew word that refers to the Holocaust.

German pilots have twice travelled to Israel for joint manoeuvres in recent years, but this is the first time the Israelis are taking part in such exercises on German soil and over German air space. The first of six Israeli air force F-16 fighter jets touched down yesterday on Monday, Tuesday AEST, at the Nörvenich air base in western Germany, where they will hold joint training exercises over the next two weeks.

The historical significance was highlighted by Major General Amikam Norkin, the Israeli air force's commanding officer, who noted that for many of his fighters, past links to Germany were personal — and tragic.

"Many IAF fighters are grandchildren of Holocaust survivors, and in the '60s and '70s of the last century, half of the IAF's pilots were Holocaust survivors themselves — and yet we believe this is the right thing to do," he said at a ceremony last week. 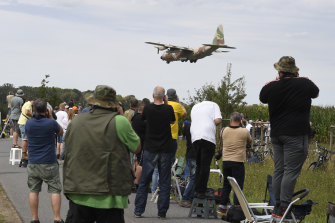 An Israeli Hercules C-130 transport plane lands at the Noervenich airbase, ahead of the joint military exercises.Credit:DPA/AP

Before the military manoeuvres begin, a delegation will visit the memorial at the Dachau concentration camp to lay a wreath in honour of Holocaust victims and the hundreds of thousands of others who died at the hands of Nazi violence. A joint formation will also fly over the Fürstenfeldbruck air base near Munich in honour of the 11 Israeli athletes who were held hostage and killed by Palestinian terrorists at the 1972 Olympics.

"This connection with the German air force is more than just tactics that allow us to learn and fly to places that we don't know yet," Norkin said at the ceremony. "In a way, this connection serves as a bridge for the state of Israel."

Gerhartz of the German air force thanked Norkin "and all his pilots for their trust and emotional attachment."

That trust is being called on at a delicate time for Germany's military, with growing indications that far-right extremism has infested its ranks. Although all members take an oath in which they vow to support the democratic ideals enshrined in the country's constitution, officials last year counted 600 instances of extremism within the ranks, mostly from the far-right and most of them in the army.

Last month, the German defence minister disbanded one of the companies in the most elite, highly trained unit of the country's special forces over concerns that it had been infiltrated by far-right extremism.

The country is under pressure to modernise its armed forces as Europe contemplates stronger cooperation among its partners. The United States under President Donald Trump has repeatedly battered Berlin for not meeting its NATO commitments to spend 2 per cent of gross domestic product on the military.

Nearly a decade after the German military scrapped the draft in favour of a more professional force, its air force has struggled to maintain flight readiness as it replaces Cold War-era Tornado fighter jets with newer planes — including the European-made Eurofighter, which the German pilots will use for the joint training.

Facing both equipment and personnel issues, the German military has in recent years even reportedly considered recruiting citizens of other European Union countries to make up for a shortage of skilled labour.

The joint exercises will involve various flying manoeuvres near the border with Denmark, including mid-air refuelling and mock air battles. Next week, they will be expanded to include Hungarian planes as part of regular NATO training exercises, the German air force said.